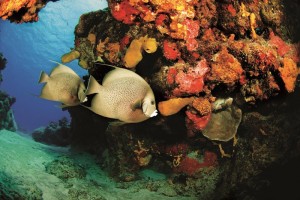 Angelfish are found in the Atlantic, Indian and Pacific oceans, so if you’ve done any warm-water diving, there’s a good chance you’ve dove with one of these popular fish. Did you know there are also freshwater angelfish?

It’s said angelfish got their name because of their shape – their fins appearing like angel wings and when turned head-down, have a silhouette of an angel. Additionally, some species have shimmering scales that reflect the light beautifully when observed on a dive. They do not have any biblical connection.

Many of the angelfish that divers see in the wild are silver, but species of varying colors exist including the queen angelfish, dwarf angelfish and hypnotic juvenile emperor angelfish. The bright colors are more than just attractive – because they change as they age — scientists believe the color and stripes on a fish may indicate its social position to other angelfish.

Freshwater angelfish have a number of interesting qualities as well. Many divers don’t know that freshwater angelfish breed for life. Females lay up to 1,000 eggs at a time. The pair shares in parenting duties, guarding the eggs and raising the young together. When one fish dies, the other will not breed again.

Next time you’re exploring a shallow reef, check out the angelfish species that live there. This inquisitive fish makes for a wonderfully interactive experience and great photo opportunites.