As a diver, you’ve seen incredible sights that few people will ever experience in real life. You haven’t, however, seen everything…

The underwater world is filled with unusual creatures – some that would surprise even experienced divers. Here are just a few of our weird and wonderful favorites from the Critter Finder section of ScubaEarth.com.

The barreleye fish (macropinna microstoma) could be considered one of the most unusual creatures underwater – largely due to its transparent head. The barreleye fish’s eyes are located inside the head, and because the head is clear, the fish can look up without turning its body to seek out prey. They are usually found at depths of 600 feet in tropical-to-temperate waters of the Atlantic, Pacific, and Indian Oceans.

Glowing sea creatures are an uncommon sight, and parchment tube worms are even more unusual. While most glow worms emit a green light, the parchment tube worm glows blue and scientists have not yet figured out why. These particular glow worms can be found all over the world in both temperate and tropical waters The photo below shows the worm under a blacklight as its blue glow is difficult to capture on camera. Read more at livescience.com. 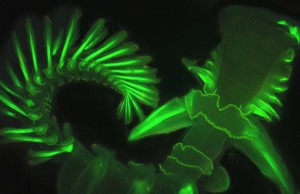 The oarfish can grow up to 50 feet in length, and it is believed that many legendary sea serpent sightings of the past were actually ancient mariners just witnessing this elongated creature. Although it is the longest fish in the world, the oarfish is rarely seen, even by scuba divers. They typically prefer depths of 650 feet or so, but have been known to travel as far down as 3,000 feet.

To learn more about these unusual creatures or to learn about other unique sea life, check out the Critter Finder tool on ScubaEarth. 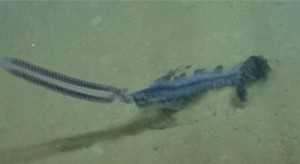 To find out about new and interesting creature discoveries, follow PADI on Twitter.  Here’s a recent article we shared about the unusual creature / colony pictured above from @dodo.