10 Creepy Creatures of the Deep

Goblins, ghosts, vampires, and zombies. Thousands of feet below the surface, marine life thrives in the darkest depths and even resembles some of our favorite Halloween characters! With spooky adaptations and haunting habitats devoid of light and warmth, here are ten creepy creatures of the deep.

While sometimes found in shallower waters, the Stargazer fish likes to use the seafloor as a disguise. With its eyes and mouth positioned on top of its head (gazing toward the stars), the Stargazer strategically buries itself in the sand waiting and looking for prey to ambush. When the target comes into sight, the Stargazer shoots out from the sand and devours the victim. It is also able to stun prey with electric shocks and its venomous spines.

This prehistoric and ghoulish-looking deep sea shark is often referred to as a “living fossil”. As the only existing member of the family Mitsukurinida, its ancestry is dated back to around 125 million years! The goblin shark is rarely seen and distinguished by its unusual, long and pink fleshy snout – which is enveloped in tiny sensitive electro receptors called ampullae of Lorenzini that detect electric fields. The Goblin sweeps the ocean floor and employs its nose as a metal detector to sense when prey are near, and then – POW! – snatches the target with their retractable jaws and jagged teeth!

With large entrancing eyes and blood red features, it’s not hard to see how the vampire squid get its name, “Vampyroteuthis infernalis” which literally translates to “vampire squid from hell.” Just like Dracula, the vampire squid has supernatural powers. Its body is covered with photophores—light producing organs that allow the squid to essentially vanish. That is, the cephalopod can turn its photophores on and off like a light switch and appear invisible in the deep. It also controls and regulates its bioluminescence to disorient predators and entice prey. And did we mention it can turn its body inside out?

Who needs to watch “The Walking Dead” when you have real-life Zombie worms? Instead of consuming brains, Zombie worms feed on skeletal bones, scavenging the deep for corpses that fall into the graveyard of the abyssal zone. These deep water worms typically feed on whale bones, and findings suggest that they may explain the holes in our ocean fossil record; that is, they may have eaten entire prehistoric skeletons before they were fossilized. 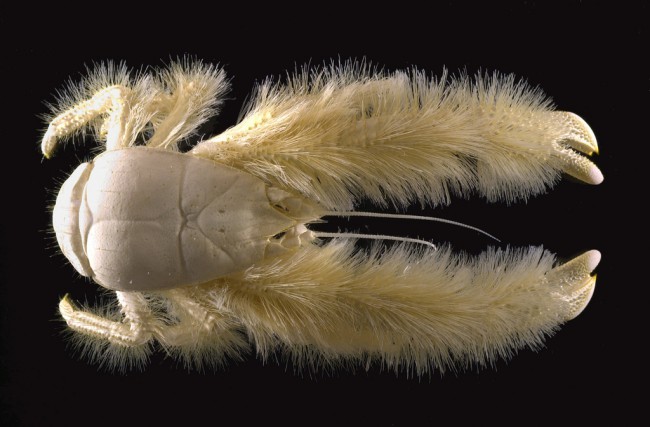 You may remember tales of Bigfoot or the Abominable Snowman, but the Yeti truly exists…the Yeti crab that is! This white, hair-raising crustacean is a new species of crab that dwells in cold deep-sea hydrothermal vents in the Pacific-Antarctic ridge. This hairy critter is nicknamed “the Hoff crab” after actor David Hasseloff, and utilizes its fuzzy features to harvest its own food. The adaptive hair-like structures on their arms and chest called setae actually attract bacteria, their main meal. Scary and hairy.

If looks could kill. You may remember this frightening fish from its appearance in Disney Pixar’s, Finding Nemo. The Anglerfish gets its name from a modified fin, resembling a fishing rod that glows at the tip. Just as with Dory and Nemo, the Sea Devil uses its bioluminescent pole as bait to lure unsuspecting prey. Combine that with a ferocious set of fangs and a dead-eyed stare, and you have one fearsome fish. 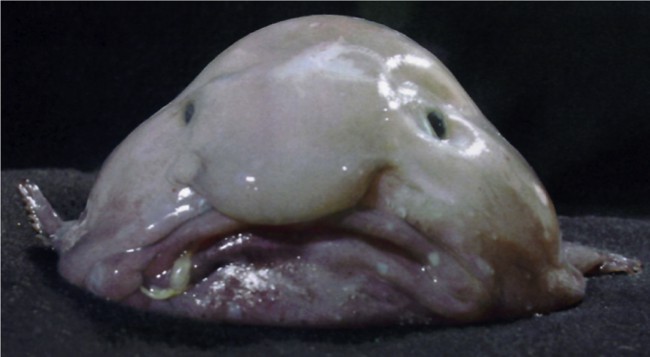 The Blob! This ghastly guy might just be uglier than that old Christmas sweater. With a disproportionate body, blotchy gelatinous skin, and a drooping nose, the Blobfish is known for its ghoulish and unfavorable looks. It can grow up to three feet in length and snacks on small invertebrates.

The rare Glass squid, also nicknamed the Cockatoo squid has a permanent Halloween costume year round. It has a transparent, balloon-shaped body with a mantle covered in polka-dots used for camouflage. Also, its chamber contains ammonia solution which helps with buoyancy.  Add large googly-eyes, and an animated expression and you have one strange-looking character.

This Ghost has been around so long even Casper would be jealous. The Predatory Ghostfish is millions of years old and looks like a mixture between a Venus Flytrap and a jellyfish. It has a translucent mouth-like hood that quickly snaps shut when zooplankton or small animals drift inside. You can find the Predatory Tunicate 700-3,200 feet down, anchored in deep sea canyons.

Grim and gaunt, the Hatchetfish gets its name from its unique razor thin body in the shape of a hatchet. This fish employs its extreme thinness and bioluminescence to blend in with the shadows and camouflage from predators below. They modulate the intensity and color of their light-producing organs to match the colors of daylight filtering down from above. And don’t forget about those eerie tubular eyes used to spot prey from above!