Dolphins are one of the most loved marine animals, though most people only get to see the species that live in the ocean. For Valentine’s Day, we decided to do a little research on one of the most unique species: the Amazon pink river dolphin. There’s a lot to love! And if you’d like to make the ocean your Valentine this year, check out Project AWARE® to let them know how deep your love of the ocean is. By donating or sharing photos, you can help protect this dolphin and all the other wonderful marine life on our planet.

They come in many shades of pink (and gray).

The  Amazon River dolphin is famous for its pink color, but many don’t know that it comes in a large number of shades. The dolphins start off gray when they’re young and slowly turn pink as they get older. Their final color can be influenced by their behavior, capillary placement, diet, and exposure to sunlight. The dolphins can be anywhere from mostly gray with some pink spots, to almost flamingo pink. And when the dolphins get excited, they can flush bright pink, similar to humans blushing. 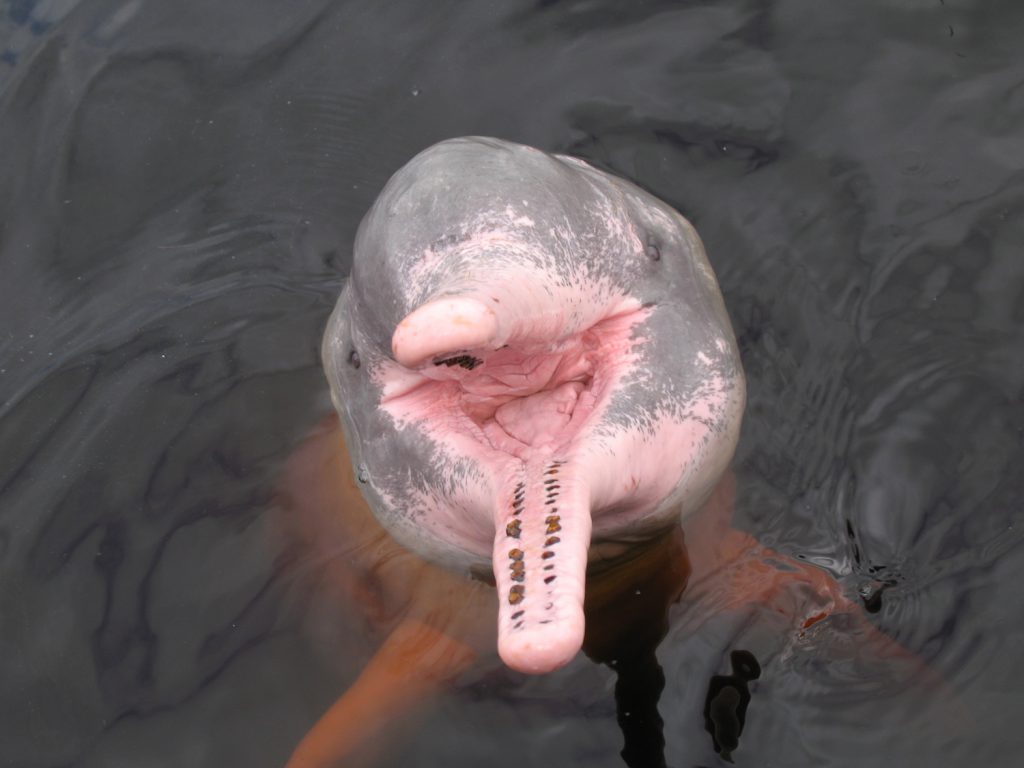 They have the largest bodies and brains of any freshwater dolphin.

Out of the five freshwater species, the pink river dolphin comes out on top. Measuring at up to 9 feet/2.7 meters long, 400 pounds/181 kilograms, and living up to 30 years old, these animals are massive. They also have unusually large brains, with 40% more brain capacity than humans.

They’re more solitary than other dolphins.

The pink river dolphin is often seen alone or in small groups of 2-4 individuals. In some food-rich areas or at the mouths of the rivers they can be found in larger groups, but it’s less common. Despite living in small groups, they’re still incredibly curious and outgoing animals, and frequently interact with humans.

Pink river dolphins have unfused vertebrae in their neck, unlike other dolphins. This means that they can turn their head 180 degrees, allowing them to maneuver around tree trunks, rocks, and other obstacles found in their murky river environments. They can also swim forward with one flipper while paddling backwards with the other, letting them turn with more precision. And they’re frequently seen swimming upside down, possibly to help them see the bottom of the river better.

There’s tons of mythology surrounding them.

This dolphin is the subject of many South American legends. One story claims that during the night, the dolphins morph into handsome men to seduce the women of the village. Another claims that if you go swimming alone, the dolphins may whisk you away to a magical underwater city. It was frequently considered bad luck to harm them, and even worse luck to eat them. Their status as a semi-magical being may have helped protect the species by encouraging humans to treat them well and preserve them.

For some more cute critters, check out our other animal posts, like the sea bunny slug or sea otters.  For more ways to get involved with the environment, visit Project AWARE’s page.

Plan and book your next vacation to dive with the pink river dolphin which is found throughout much of the Amazon and Orinoco river basins in Bolivia, Brazil, Colombia, Ecuador, Guyana, Peru, and Venezuela.

Love unique marine life? Learn more about the most venomous fish in the world: