Recently we’ve shared a few videos of Crinoids floating freely through the ocean. They’re mesmerising to watch, and the videos we shared had you asking some questions about these curious creatures, so here are some interesting facts about Crinoids.

They are however, related to both starfish and echinoids. Like starfish, Crinoids usually have 5 fold symmetry.

Despite their resemblance to flowers, are not plants. They are echinoderms – animals characterised by their rough, spiny surface and 5 fold symmetry.

Crinoids today are relatively rare however they were once plentiful and diverse.

Crinoids have been around since the Ordovician period – 490 million years ago! Palaeontologists however, think they could be even older than that.

There are around 700 living species of crinoids known to us. Generally, they’re found in two forms. Those that have a ‘stem’ and those that lose their stem as they mature. Crinoids that have a ‘stem,’ are often referred to as Sea Lillies because of their resemblance to the flower. Often their stem can anchor them to the ocean floor. Those without a stalk – Feather Stars, float freely through the ocean

They eat with their hands

Well, kind of. A Crinoid’s feather-like arms are covered with a sticky mucus which traps food that happens to float past. Then, the tiny tube feet that cover the arms, pass the food particles to the centre of the arm where it is transported to their mouth. 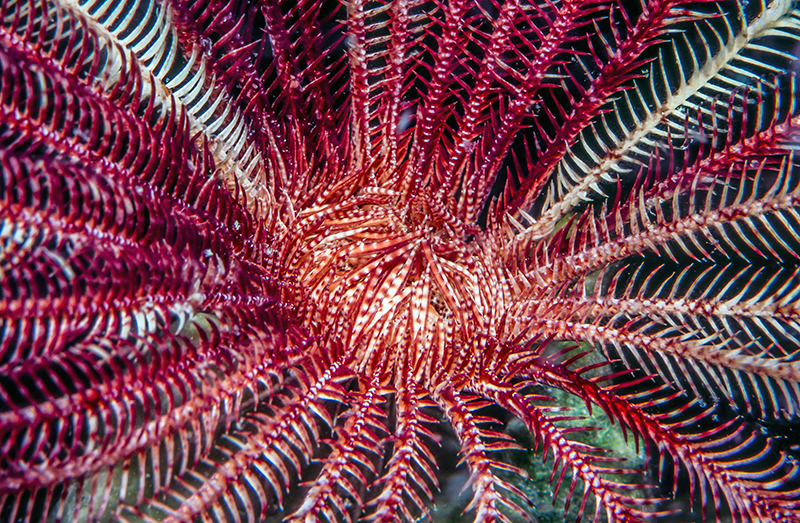 They know no bounds

Crinoids are commonly found in water deeper than 200 metres, but sometimes the variety without stalks will be seen in much shallower water.

Want to see these guys in real life? Your best chance is to start diving today and you may just get lucky enough to spot one.