Polluted Tourism – The State of our Seas

Written by guest blogger Helen Parkinson, a keen travel writer with a passion for marine conservation

You’re probably familiar with the Great Pacific Garbage Patch, the marine monstrosity that stretches from the West Coast of North America all the way to Japan. Well, I’ve got bad news for you: last month, a second huge vortex of litter was discovered in the Pacific.

This new gyre was found by Captain Charles Moore, who was also one of the first to come across the original patch back in 1997 during an ocean yacht race. Moore, founder of the Algalita Marine Research Foundation which aims to find a solution to plastic pollution, shared photos of his most recent discovery with ResearchGate.

Contrary to what you might expect, most of the pieces of plastic that he found are each no bigger than a grain of rice, although there were some larger anomalies such as buoys and fishing gear. While official analysis is yet to be carried out, Moore estimates that in some areas of the South Pacific there are millions of plastic particles per square metre.

It’s not an issue limited to faraway seas; the UK’s shoreline has also seen avalanches of plastic descend on its shores. In Cornwall, Tregantle Beach was inundated with tiny plastic pellets known as nurdles, with an estimated 401,230 nurdles collected in one single cove.

While there is no certain solution to plastic pollution in sight, entrepreneurial environmentalists and start-ups around the world are racing to invent an ingenious contraption to solve it. One notable example is the Ocean Cleanup, founded by 23-year-old Boyan Slat, which aims to use a large, floating structure to pull plastic from the Great Pacific Garbage Patch.

Meanwhile, to help raise awareness of the plight of our seas, British designer Courtney Hobbs was commissioned by Soakology to design a series of vintage-inspired travel posters. Each poster features an area threatened by marine pollution and advertises it as a hypothetical tourist destination. 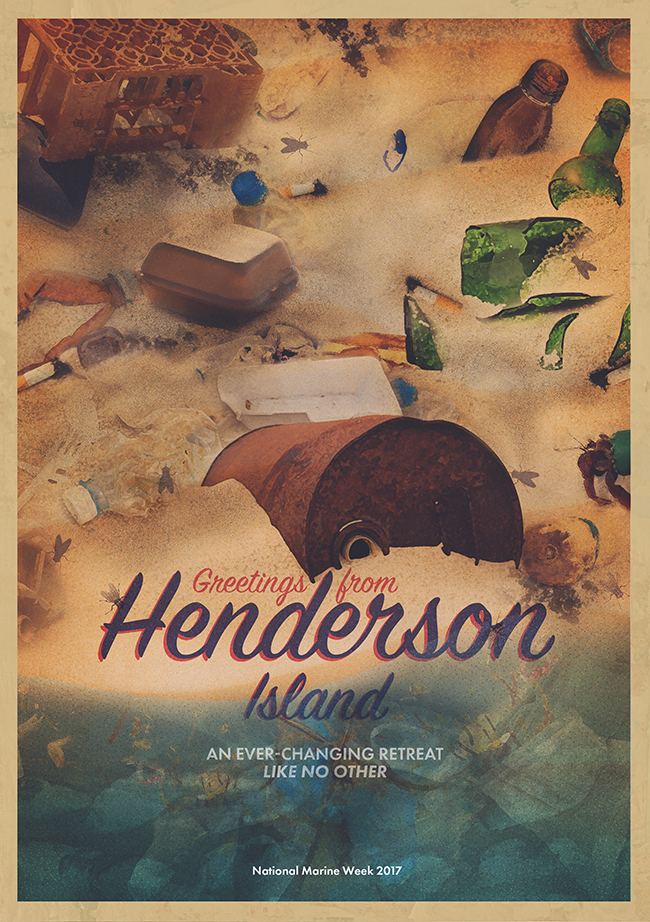 It’s estimated that by 2050, 99% of birds will have plastic in their guts due to our wasteful habits. We can only hope that a solution will be found in time to prevent this tragedy.