You’ve Been Stung by a Jellyfish – Now What?

Picture it. You’re on a dive taking in the beautiful marine life all around you when you feel something brush past your ankle. Immediately, an intense burning sensation travels up your leg, and you realize you’ve been stung by a jellyfish. Now what?

It depends on what kind of jellyfish stings you

There are over 2000 different types of jellyfish with some as large as adult humans and others smaller than a grain of salt.  Found in every ocean, lakes, and even in some freshwater bodies of water, roughly 70 of the 2000 species can hurt humans. 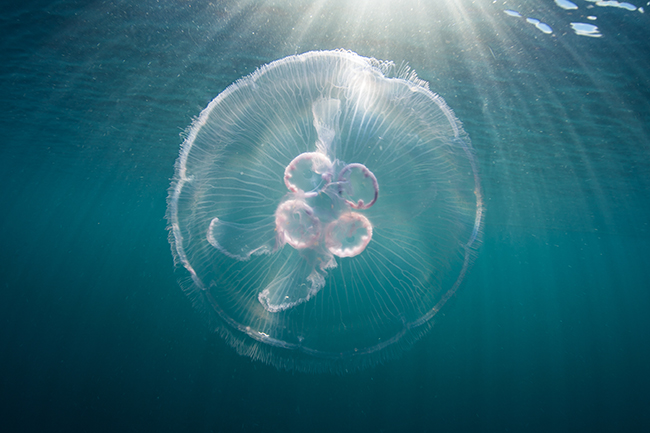 Moon jellyfish, otherwise called “saucer jellies,” “moon jellies,” or “common sea jellies,” are one of the most common types of jellyfish. Their moonlike bell shape and short tentacles make them easy to spot. They can be found in the Atlantic, Pacific, and Indian Oceans, mostly near the coast in warmer waters.

Though mostly benign, these jellyfish sometimes sting. However, the sting is mild in nature and restricted to a precise area of contact.

The lion’s mane jellyfish, otherwise known as the “hair jelly,” is one of the largest known jellyfish growing up to 120 feet/37 meters long. This species prefers the cooler waters of the Arctic, Northern Atlantic, and Pacific Oceans but can also be found in the southwestern Baltic all the way to Australia and New Zealand.

Due to the insane amount of tentacles (up to 1200), these guys can be dangerous both in and out of the water. It is reported that up to 50 people sustained jellyfish stings from a lion’s mane that washed ashore on a US beach. Like most other jellyfish, their tentacles can still fire even after they have died.

The stings are painful, causing localized swelling and redness, but are rarely fatal. 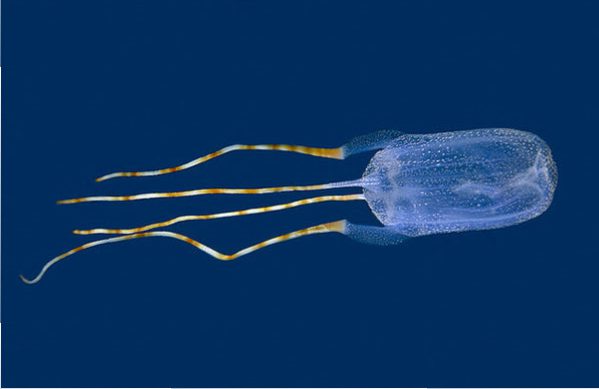 The box jellyfish, otherwise known as the “marine stinger” or “sea wasp,” packs quite a punch, containing enough venom to kill 60 people. It is said that the box jellyfish is the deadliest creature in the ocean. “These dangerous jellyfish are common in the tropical Indo-Pacific, but some species of box jellies inhabit subtropical oceans, including the Atlantic and East Pacific. Species occur as far north as California, the Mediterranean and Japan and as far south as South Africa and New Zealand.”

That being said, if your dive ends with you encountering one of these, it does not mean your meeting will be fatal, but you should seek medical attention immediately.

The best course of treatment for all jellyfish stings is to rinse affected area with vinegar (avoid using freshwater), remove all visible tentacles, immerse the affected area in hot water, or use the localized application of a cold pack to alleviate pain. Look for signs of an allergic reaction and seek medical attention if necessary.

Treating jellyfish stings is just one of the many skills taught in the PADI Emergency Responder Course. Click here to learn more about EFR.