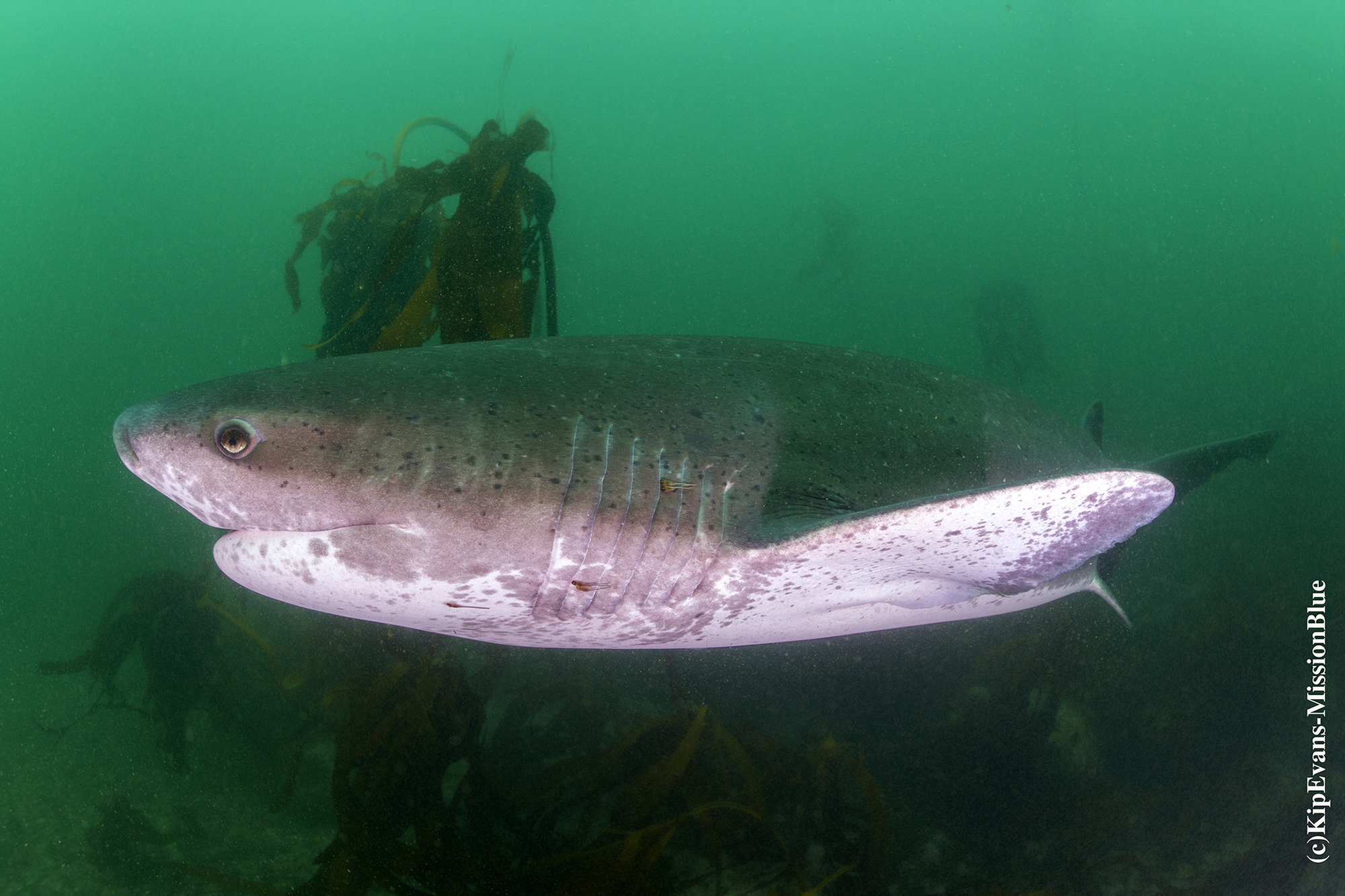 A seven gill cow shark glides through the chilly green waters of a kelp forest in the False Bay Hope Spot. Photo by: Kip Evans

Divers that slip beneath the chilly waters of False Bay, South Africa, can be immersed in dense kelp forests that support an incredible diversity of marine life. In 2014, False Bay was one of six areas along South Africa’s coastline designated as a Hope Spot by Dr. Sylvia Earle’s Mission Blue. Hope Spots are parts of the world’s oceans that are considered to be critical to the health of our blue planet.

The False Bay Hope Spot ranges from Cape Point to Cape Hangklip, stretching approximately thirty kilometers across (nearly twenty miles) at its widest point. While a portion of False Bay is reserved as a no-take Marine Protected Area that serves as a sanctuary for a wide variety of ocean animals, overfishing in unprotected areas of the bay, and pollution from surrounding urban development are certainly issues that affect False Bay. 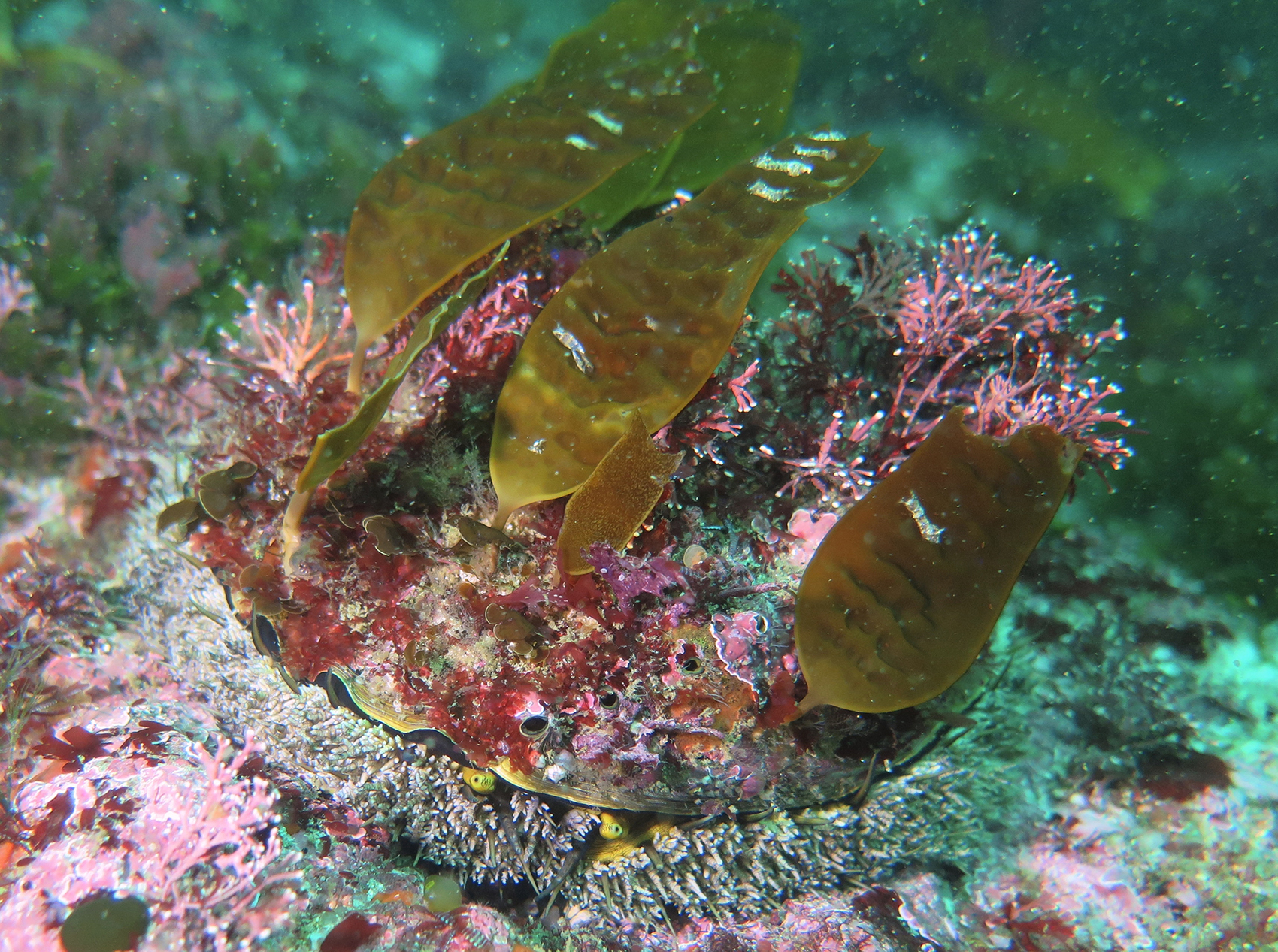 A beautifully overgrown abalone clings tightly to a rock amidst a False Bay kelp forest. Photo by: Sylvia Earle

Local underwater residents in False Bay range from teeny tiny to very large. An abundance of microorganisms contributes to the nutrient-rich waters that False Bay is known for, and brightly colored invertebrates like nudibranchs, abalone, sea stars, crabs, anemones and sea cucumbers can be found among the rocky or sandy bottom on the kelp forest floor.

Small and large fish like klipfish, hottentots, and seabreams, are commonly seen during False Bay dives, and while guest appearances by charismatic cape fur seals are also fairly common, divers that get to observe an African penguin or two swimming by have really hit the jackpot. 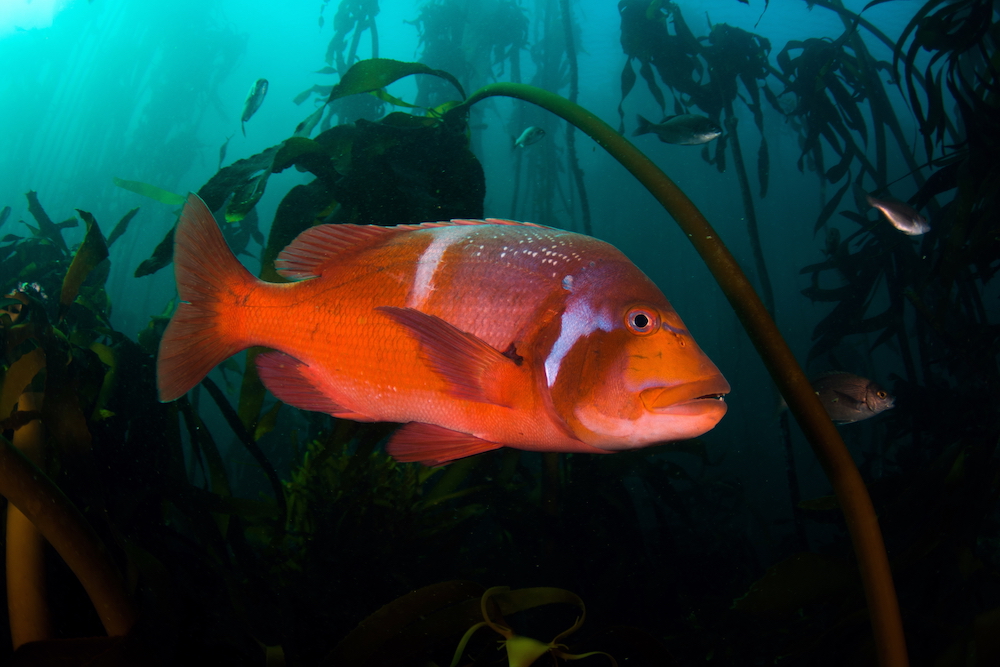 Bright red seabreams are just one species of False Bay marine life that really add a splash of color to the underwater scene. Photo: Thomas Kotouc

False Bay, along with the other five Community Hope Spots designated along South Africa’s coastline, was selected in collaboration with Sustainable Seas Trust on a variety of criteria including definable boundaries, ecological necessity, scientific evidence, and potential for public support. Through the work of Dr. Sylvia Earle and the Mission Blue team, the False Bay Hope Spot has been embraced by local citizens, government officials, business chambers, universities, and non-profits – because this call for conservation not only benefits marine life that calls False Bay home, but also positively impacts the humans that live along this stretch of coast. This is great news for this pristine yet stressed underwater ecosystem that is often called one of the most ecologically rich coastlines in the world. 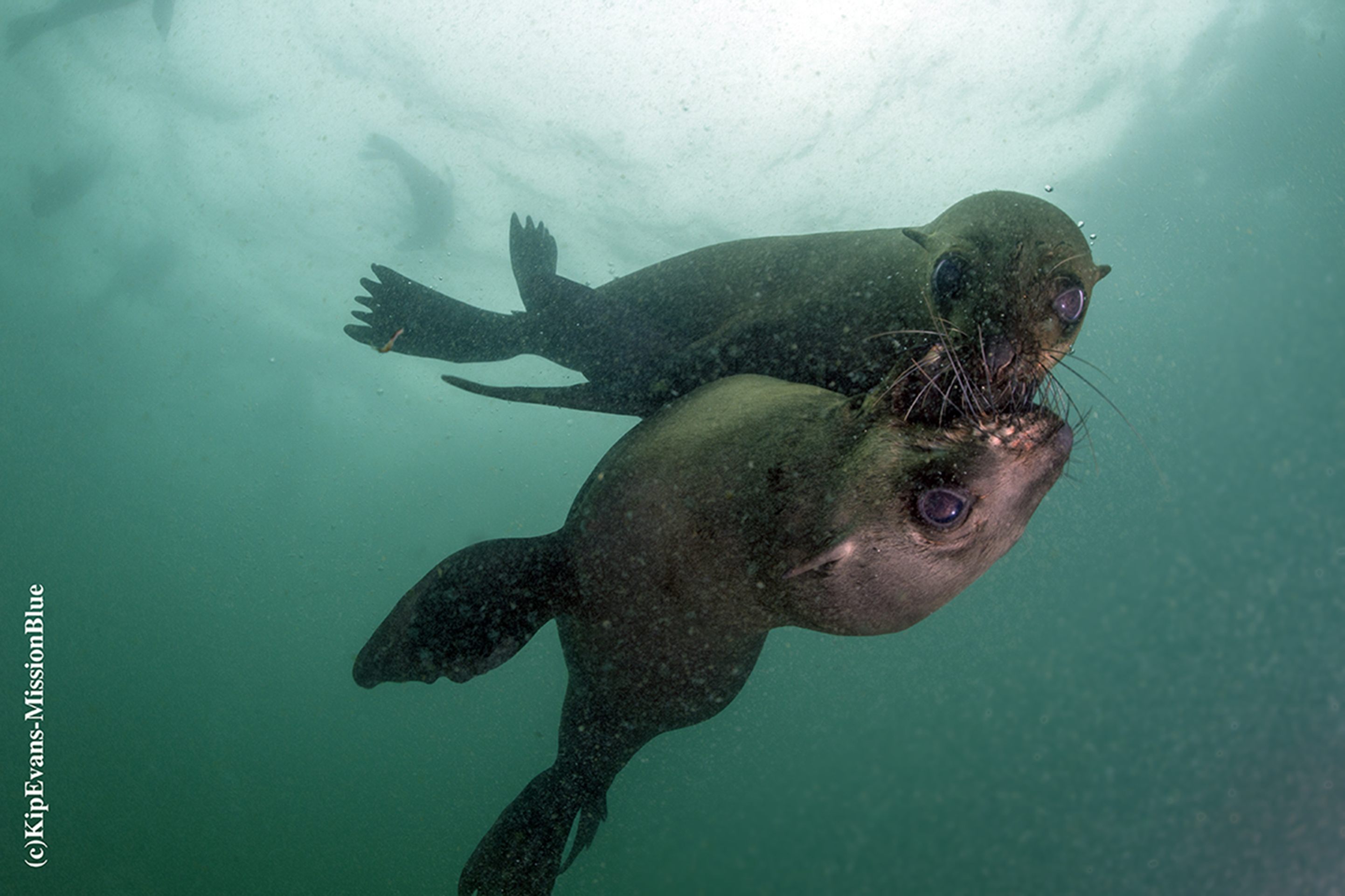 Want to join Mission Blue in their efforts to inspire an upwelling of public access, awareness, and support of a global network of Hope Spots throughout the world’s oceans? Learn more about existing Hope Spots and even how to nominate an area of the ocean that you feel needs to be protected with the support of Mission Blue here. 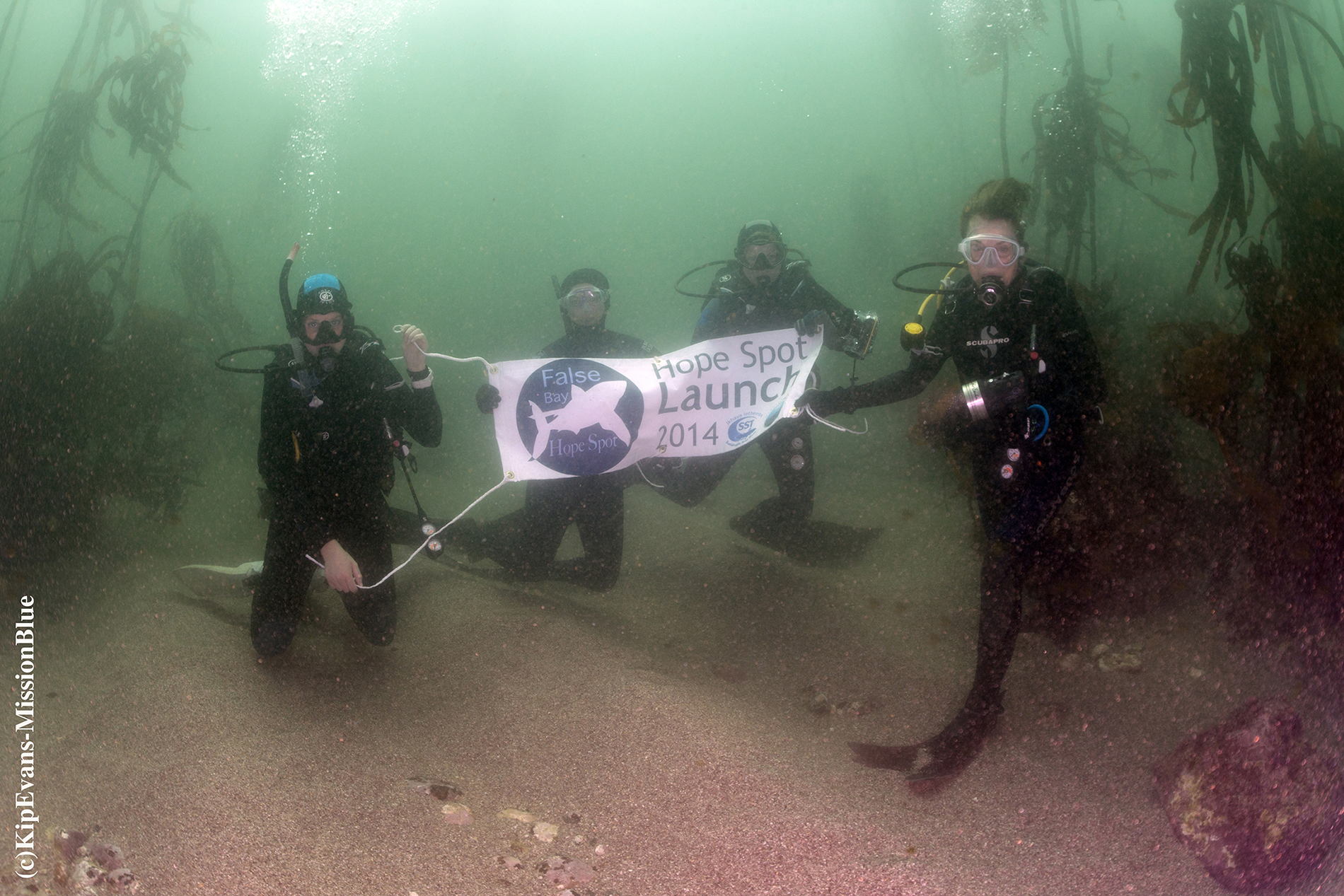 Dr. Sylvia Earle and some of the Mission Blue team members holding up a False Bay Hope Spot banner during a dive in 2014 when the Hope Spot was launched. Photo by: Kip Evans

In 2017, PADI and Mission Blue joined forces in protecting the world’s oceans. Learn more about how we’re working together to ignite global support for Hope Spots here. To lend your support, when planning your next dive trip, check out this list of the top marine sanctuaries and Hope Spots in the world to visit.