In July 2016, a group of divers set out to dive all five Great Lakes in one day. The occasion? PADI® Women’s Dive Day and a shared passion for adventure.

For readers who aren’t familiar with the Great Lakes, here’s a fun fact: if you want to visit all five, the drive time alone is 14 hours. Needless to say, trying to dive all the Great Lakes in just 24 hours was a massive undertaking.

“The biggest challenge, besides the drive, was narrowing down which five sites to visit, especially in the Thunder Bay National Marine Sanctuary,” said Stephanie Gandulla, a maritime archaeologist and educator for NOAA. “There are so many great sites.”

Stephanie is no stranger to adventure. In addition to participating in underwater archeology research expeditions, Stephanie was part of the Sedna Epic Expedition, a multi-year snorkel relay project through the northwest passage. She is also a PADI AmbassaDiver™.

In the end, a plan was drafted. The divers narrowed their focus to historical dive sites with easy shore access near a major roadway. Just after midnight on 16 July 2016, the determined group of divers took the plunge in Lake Superior. One lake down, four to go. 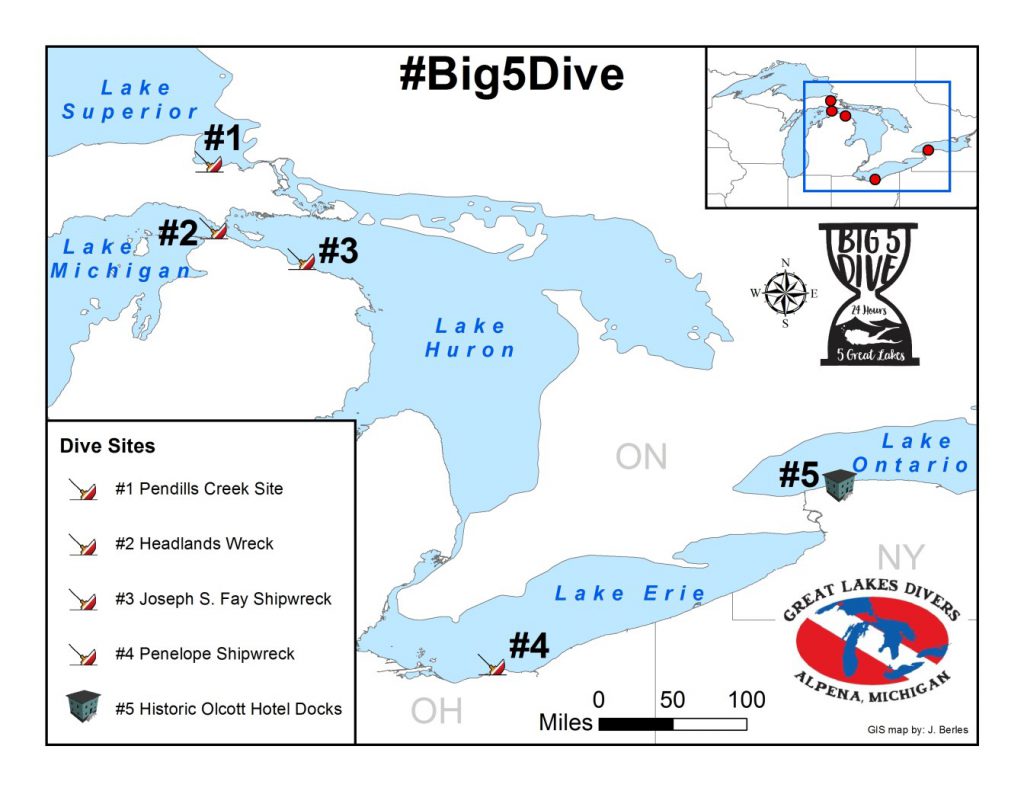 The Big Five Dive team included 13 female divers from a variety of backgrounds and a camera team from Mad Law Media. “The decision to film the event happened after we’d already planned the dive itself,” said Stephanie.

Director Elizabeth Kaiser, a filmmaker based in Savannah, Georgia but “a Northern-Michigander at heart,” brought a five person crew to document the event. She describes how the team came together:

“Several friends who are filmmakers/creatives heard about the dive and wanted to join the team. Our co-director of photography, Tami Lynn Ross and camera assistant Katie Stine wanted to be part of a story that championed women. My sister, Jessica Kaiser, world’s best production assistant/clipboard holder, wanted to be part of an adventure where the two of us could put our feet into every Great Lake together over the course of 24 hours. My husband Kyle Maddux-Lawrence also dove all the sites with the ladies, and captured underwater footage at each site.”

Most of the film was shot on the fly. Only about 20% of the footage, mainly the interviews, were shot ahead of time; but lady luck shone on the divers and the film crew.

“Our interview with Debbie Street, the veteran diver, wasn’t planned,” Elizabeth said. “We met her on a shipwreck tour and she started to tell us about what diving was like for women when she started diving in the ’70’s. We asked if we could get her on camera talking about her experiences, and she agreed.”

Scuba divers throughout the region stepped up to help the dive team achieve their goal. “We reached out to local dive shops in the reconnaissance phase and connected with the diving communities we passed through. PADI does such a great job of creating a positive community atmosphere, not just here but globally, and this endeavor just fit right in,” Stephanie said.

Non-divers played an important part as well. Community members on Lake Huron gathered at sunrise to cheer the women on as they surfaced from their dive on the Joseph S. Fay. Later in the day, homeowners on Lake Erie lent a hand moving equipment to ensure the divers could make to their final stop (Lake Ontario) in time.

After its sold-out premier at the Thunder Bay International Film Festival in January 2018, The Big Five Dive is touring more film festivals. Learn more about the film, the crew and the dive team at bigfivedive.com, connect on Facebook, or follow the hashtag #big5dive.

Stephanie recently completed her PADI Instructor course and is “looking for my next grand underwater adventure.” She continues to work with NOAA where she enjoys encouraging the next generation, both girls and boys, to get out and explore our amazing world underwater.

Great Lakes Divers, in Alpena, Michigan, sponsored The Big Five Dive. While they don’t plan to repeat their Great Lakes scuba diving marathon in the future, divers can join them on Women’s Dive Day (Saturday 21 July) for a dive on the Joseph S. Fay, a picnic, and a screening of The Big Five Dive at the Rogers City Theater in Rogers City, Michigan.

The Big Five Dive brought together divers from across the country to achieve something amazing. “It was exhausting, yet over all too fast!” said Stephanie.