Made up of more than 17,000 islands, Indonesia is at the epicenter of global marine biodiversity. Home to a greater variety of marine life than anywhere else on Earth, Indonesia’s coral reefs, tropical fish, and marine megafauna have dazzled divers from around the world for decades. With enormous threats facing the health of Indonesia’s underwater ecosystems – from fishing to climate change, to pollution – there is great need for conservation efforts to safeguard the future of Indonesia’s waters.

To highlight some of the most incredible and impactful ocean conservation efforts focused on Indonesia, we’re highlighting Shawn Heinrichs. Shawn is an Emmy Award winning cinematographer, photographer, scuba diver, marine conservationist, and the founder of Blue Sphere Foundation. As a more than dedicated activist, Shawn is a prominent force in the global fight to protect endangered marine species and habitats. His key areas of conservation focus include ending the global slaughter of sharks, protecting manta and mobula rays, and establishing marine protected areas – with more than a decade of work centered around Indonesia.

Read our interview with Shawn Heinrichs below, for his in-depth perspective on diving, photographing, and working to protect the precious underwater ecosystems and marine life of Indonesia. Prepare to be inspired! 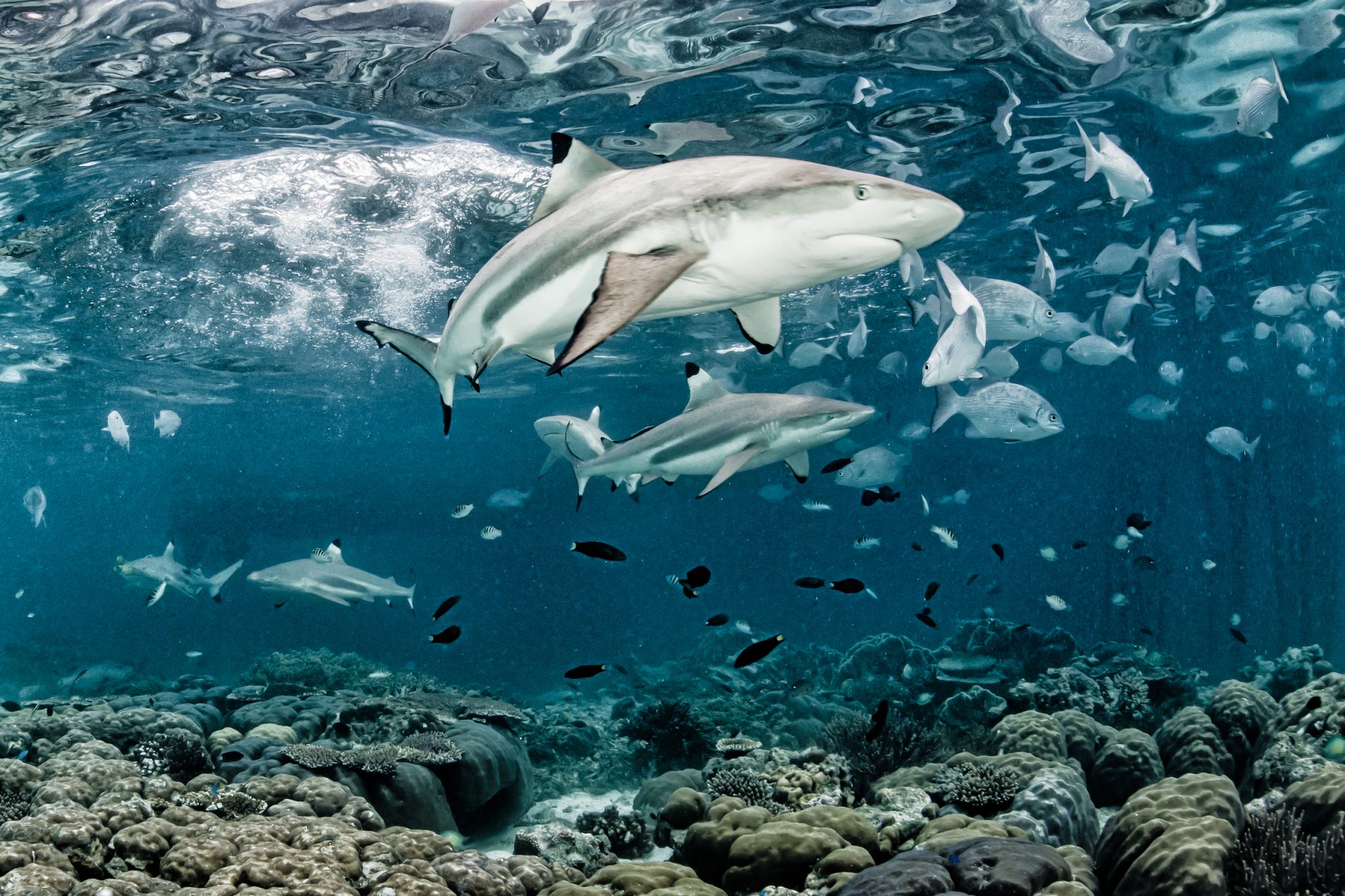 Question: What draws you to focus much of your conservation photography and videography on the marine life and underwater ecosystems of Indonesia?

Shawn: Indonesia is without a doubt home to the richest ecosystems in all of the world’s oceans. Right in the heart of the coral triangle, Raja Ampat is the very epicenter of global marine biodiversity. Nowhere else on earth can we find more species of hard corals, soft corals, and marine life than in this very spot. It’s for this reason, and because of the opportunity to achieve so much profound conservation successes, that I’ve spent the better part of a dozen years working in and around the region to help protect it. I am absolutely passionate about not only the marine life within Indonesia, but also the people. Beautiful, connected people that dedicate a large portion of not only their time but also their efforts and their incomes into protecting their local resources. It is my belief that as a community, if we draw together citizens, government, NGOs, and industries, in partnership to protect these resources, that we can make a lasting impact. Through the use of imagery and storytelling, we’ve been able to galvanize many of these communities into a singular voice, and as a result have had significant conservation successes that has had a profound impact on protecting these underwater ecosystems long into the future.

Question: What are some of the most memorable diving experiences you’ve had in Indonesia?

Shawn: Perhaps one of the most memorable experiences was a time when I was in Raja Ampat, diving on a seamount near Misool Eco Resort. I remember when I dropped in that morning it was a beautiful day with crystal clear waters, and visibility extending as much as 150 feet. As I dropped in on the seamount, I noticed a group of oceanic manta rays swirling in the blue. Descending down to the reef, they came in, and for hours I danced with these magnificent wanderers of the oceanic blue. From time to time, they would come in individually to me and hover just over my head, and as my bubbles caressed their bellies I could see the little cleaner fish dancing in and amongst their gills. Their eyes darted back and forth, scanning the reef, for either threats, or for opportunities. As the morning drew to a close, one of the most significant moments was when this beautiful female manta ray followed me right up to the boat and then did a big belly roll right beneath me. When I climbed in the boat, she just circled around. So, with just my snorkel gear, I jumped back in the water, she came right up to me, and we swam together for a while. At some point, as she drifted down towards the reef again, and she turned her head sideways, as if asking, ‘are you gonna join me?’.  I so wanted to go down, but it was time to go. I waved goodbye, she waved her wings, and off she went. It was in the moment that I realized how truly special this brilliant blue space is.

Question: What are some conservation success stories you’ve been part to advocate for the protection of sharks and rays in Indonesia?

Shawn: Indonesia has the greatest biodiversity of sharks and rays of anywhere in the world. Unfortunately, it is also the number one fisher, at least for the last decade and a half, for sharks and rays. As such, the populations of many of these species have been severely depleted throughout the archipelago. As part of my work there, a huge focus has been trying to secure local and national level protections for many of these vulnerable species. Some of the biggest successes have come at both the local level, as well as at the national level. Locally, in Raja Ampat, working closely with Misool Eco Resort, we succeeded in protecting a 400 square kilometer section of the most biodiverse reefs in all of Raja Ampat in 2005. Later, in 2008, we were able to expand that to a total of 1,200 square kilometers. As a result of those conservation efforts, with strict enforcement by the local communities, shark populations are 25 times greater within the protected area than outside of it. Following that, we succeeded in working closely with the regional government to secure protection for all of Raja Ampat as a shark and ray sanctuary, as well as other marine megafauna. With that protection, a major portion of the large scale commercial vessels that were doing trawling, long-lining, and gill-netting, have been removed from the waters of Raja Ampat. In 2014, following a win at CITES (Convention on International Trade in Endangered Species) we were able to secure national protection for oceanic and reef manta rays throughout all of Indonesia, making it the largest sanctuary in the world for manta rays. And now, working closely with the government, we’re looking to increase protections for other CITES shark and ray species, and ultimately create a safe haven for many of the most vulnerable shark and ray species throughout Indonesia. 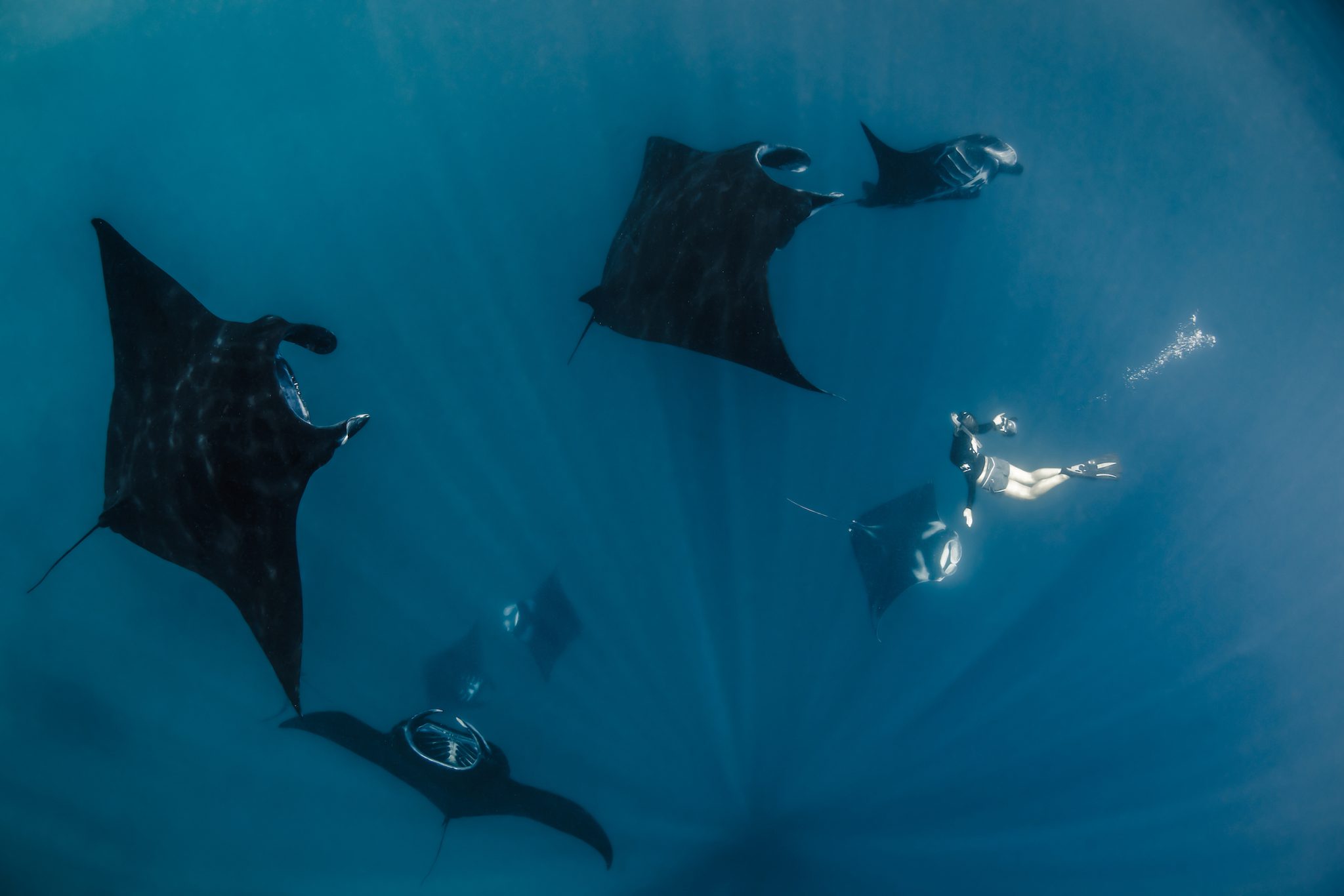 Question: What inspires you to so passionately advocate for the designation of Marine Protected Areas in Indonesia?

Shawn: As mentioned before, Indonesia’s reefs are some of the richest in the world and the biodiversity is second to none. But they also are some of the most threatened. With a population approaching 300 million, and a culture heavily dependent on marine resources, a target is squarely on many of the fish and reefs that cover the waters of Indonesia. As such, a large portion of the reefs have either been damaged or severely damaged. The statistics say that only 3% of Indonesia’s reefs are now considered pristine. However, those 3% of the reefs are still incredibly important, and if we are to see the recovery of Indonesia’s reefs into the future, it is so important that we strictly protect those. As such, a large percentage of my effort has been focused on working with both international and local NGOs to ensure protections for these pristine reefs, as well as some of the recovering reefs. If we are successful, it is my hope that as the decades transpire, we will once again see large portions of Indonesia’s reefs thriving.

Question: What can the global PADI dive community do to support the conservation and protection of marine life in Indonesia?

Shawn: One of the most powerful impacts that divers have, is how they spend their money, and where they choose to spend it. If a PADI certified diver takes the time to research the operations that are doing the most important conservation work, and they choose to spend their money on their holidays and their dives at those areas, they’re taking a very powerful step forward in helping to promote the conservation of Indonesia’s reefs and marine species. So, I ask all divers to take the time and do the research, to find operations, such as Misool Eco Resort, that have profound and lasting impact on the conservation of Indonesia’s resources. Look to those operations, invest your time and your money, and support them.

Question: What helps you stay optimistic and hopeful about the overall health of Indonesia’s marine ecosystems when looking towards the future?

Shawn: Perhaps the reason that I’m most optimistic about the future for Indonesia, is that the people are still very connected to their natural resources, and there is such a powerful community of youth and adults that are working tirelessly to conserve it. These are beautiful people that love their land of water. If given the support, the knowledge, and the training, they’ve demonstrated again and again that they will do what is necessary to protect it. We also have instigated an important movement called Indonesian Ocean Pride that harnesses the voices of Indonesia’s most influential players, from some of the most powerful politicians, to some of the greatest celebrities and local activists. Within that movement, we are growing a greater and greater base of strong powerful voices that span both culture, religion, race, and age, that are all stepping up to say ‘we believe in the future of our reefs and the species that inhabit those reefs, and we are going to take a stand and protect them.’ So it is my belief that as these voices become stronger, and as government takes more and more steps to heed those voices, and industry falls in line, that we will see a future for Indonesia that will serve as a shining beacon of hope for conservation in our oceans worldwide. 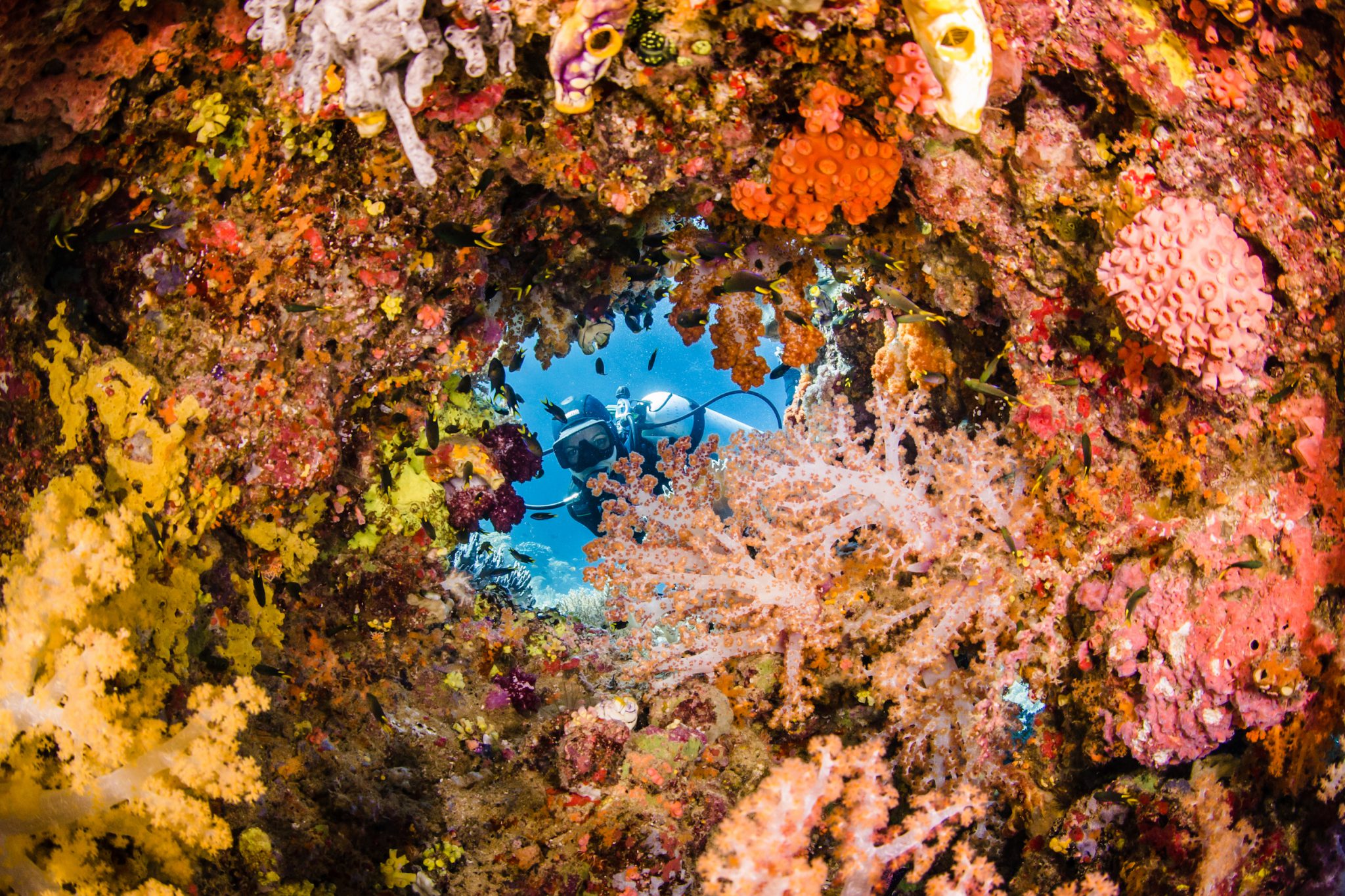 To learn more about Shawn Heinrichs’ conservation work in Indonesia and around the globe, follow him on Instagram, Facebook, and Twitter. And when planning your next dive trip, to Indonesia or anywhere in the world, make sure to support ocean conservation initiatives, operators focused on sustainability, and marine protected areas, whenever possible.

All photos in this article taken by Shawn Heinrichs while diving in Indonesia.