This reef tells a paradoxical story, as it still harbors high coral cover and diversity, despite poor water quality and sediment discharge from the nearby commercial shipping channel. However, in recent years, Tierra Bomba’s precious reef has become increasingly vulnerable due to pollution, dredging, and climate change. Having caught the attention of marine scientists, ocean conservationists, and divers from the local area as well as from around the world, this remarkable reef is being given a fighting chance at survival.

Yassandra, a young woman from Tierra Bomba, has emerged as a conservation leader on the island. She is on a mission to inspire locals to unite to save Varadero’s Reef, as the health of the reef is vital to the community’s well-being and survival. Thanks to PADI Dive Shop Paraiso Dive Cartagena  she has been learning to dive for two years, Yassandra has been able to see first hand the incredible beauty of the coral reef that surrounds her island home, the unfortunate degradation of the reef, and the utmost importance of protecting the reef.

She was the only woman from her community to study Marine Biology, however she has had to terminate her studies due to unforeseen circumstances. Thanks to Paraiso Dive, Yassandra and Laura, another young female diver featured in the film, have been bringing groups of young islanders together to snorkel, dive and learn about reef conservation, to empower them to appreciate and advocate for their local reef.

Christina and Jota, founders of Paraiso Dive, have seen an amazing increase of garnering interest from the young islanders during lockdown. They said, “The last session was freediving at the reef and today we did the Discover Scuba Diving program up to confined water….when they are all ready we will go for a shore dive and after that hopefully will begin theory for the Open Water Course.”

As part of the Red Bull Storytellers series, Yassandra is featured in the documentary short film ‘Dive Tierra Bomba Dive’. Watch the film below, and click here to learn how you can help support her efforts to protect Varadero’s Coral Reef.

In 2018, Veradero’s Coral Reef was officially declared a Hope Spot by international non-profit Mission Blue. Hope Spots are unique areas of the ocean that are crucial to the health of our blue planet. Led by legendary oceanographer and diver, Dr. Sylvia Earle, Mission Blue is on a mission to ignite public support for a global network of marine protected areas.

In addition to interest from the regional scientific community, as well as local advocates like Yassandra, Mission Blue is dedicated to communicating the threats facing the Varadero’s Reef Hope Spot, as well as the successes that arise as a result of local and international activism for this unique reef ecosystem. Mission Blue and local partners on the ground at Varadero’s Reef believe that if the area is protected, the survival of the reef will help to ensure the protection of the coasts, the supply of local food, and further the possibility of sustainable and responsible eco-tourism activities like diving. Additionally, as a relatively healthy coral reef ecosystem despite poor surrounding conditions, Varadero’s Reef offers insights into designing suitable conservation strategies that will help save other affected areas in the Colombian Caribbean. 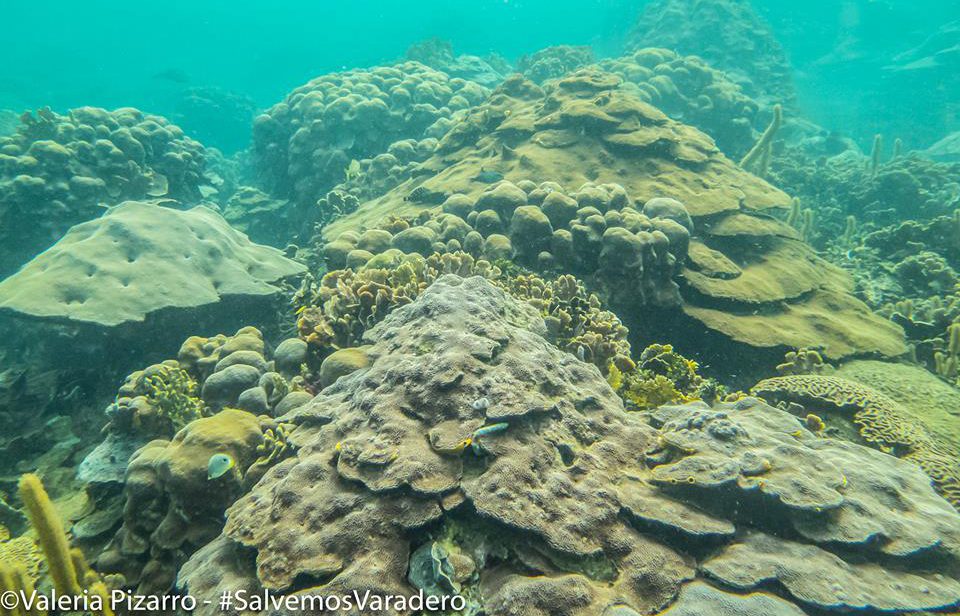 “Hope Spots not only recognize pristine marine environments worth preserving, but also important marine ecosystems that have borne the brunt of human pressures, yet still have a chance of rebounding. It is cause for hope that the people of Cartagena are coming together in support of the Varadero’s Reef Hope Spot. So, should we race to see how quickly we can develop the Bay of Cartagena? Or race to see what can be done to protect what remains? For now, there is still a choice.” – Dr. Sylvia Earle, Mission Blue Founder

Sinergia Dive House is Paraiso Dive’s next project the focuses on outreach to facilitate conservation and scientific research on the reef. They provide necessary logistics and infrastructure to marine biologists, oceanographers, universities, and students. Their goal is to create opportunities to see and value the reef through underwater art, education workshops, scuba diving certifications, media, databases, and school trips. Visit their page to learn more and support their GoFundMe here.