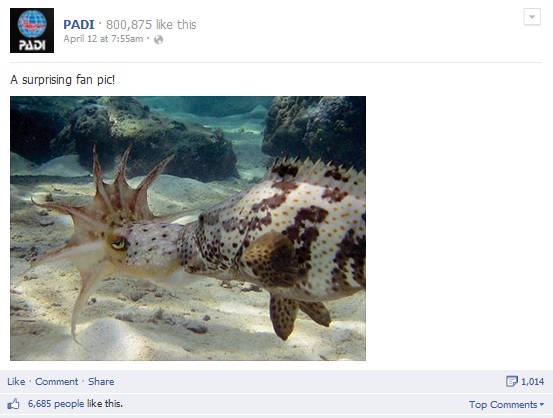 Sharks and turtles get a lot of love from divers, (and for good reason), but today we’re going to give some attention to our friend the squid.

2013 was a good year for squid enthusiasts – most notably the first video of a giant squid. There are more than 300 species of squid, but the female giant squid can grow to 43 feet (13 meters)!

Like the octopus, squid are part of the cephalopod family, but the two have some key differences. Squid have triangular heads with two fins while octopi have round heads and no fins. Each has eight arms, but squid are unique because they also have two tentacles with hooks and sand suckers on the ends used for hunting and eating. Additionally, octopi have no bones, but squid have a pen – an internal structure that serves as a flexible backbone.

Squid are found both in tropical salt water and in temperate zones such as California. Approach slowly, and you may be able to see them change colors – the reaction of tiny pigment cells call chromatophores. Squid use these cells for both camouflage and communication. When planning a trip, ask the local PADI dive shop what the hot spots are for squid and other cephalopods.

Wondering about the image above and what happens next? Visit PADI’s Facebook page and read the comments.