Stonefish: The Most Venomous Fish in the World 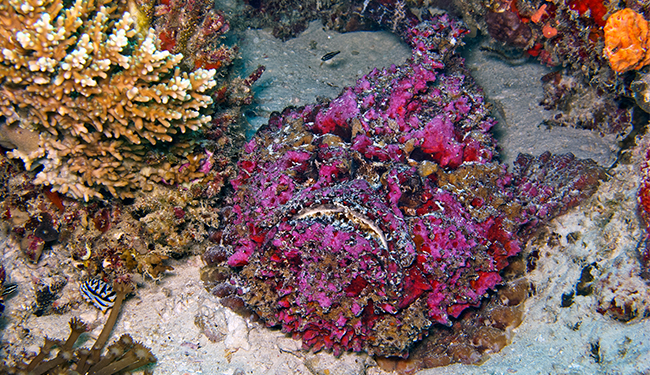 In the underwater world, you don’t have to be the largest creature to be the biggest threat. The stonefish, which reaches an average length of 30 to 40 centimetres and up to 2 kg / 5 lbs in weight, is the most venomous fish in the world having venomous sacs on each one of its 13 spines.

Although the threat to responsible divers is minuscule, here are five facts you want to know about these interesting but toxic underwater critters should you come across them.

1. There are five species of stonefish which can be found in the coastal regions of the Indo-Pacific oceans.

2. As the most venomous fish in the sea, most would assume that stonefish kill their prey using the venom in their spines, but this is not the case. Instead, the stonefish capture their prey with speed. To capture food, the stonefish wait for their prey to appear and then swim fast and quickly attack. The attack can last as little as 0.015 seconds! When not chasing their prey, the stonefish normally swims very slowly.

3. Having excellent camouflage capabilities, the stonefish can be difficult to notice. It’s often exciting to spot the most disguised critters when diving so remember to take notice of what’s hiding in the rocky seafloor or coral. Have you spotted these other camouflaged critters?

4. Don’t panic – stonefish will not go out of their way to attack you, rather use their poison as a defence mechanism against predators. The venom is usually released when pressure is applied to the stonefish’s spine, which means the poison is most often emitted when the stonefish is being attacked by a predator or stepped on by a human. If for whatever reason you accidentally step on a stonefish, seek immediate treatment as the venom can cause severe pain, heart failure and even death if left untreated. Hot water can be used for temporary relief however seeking medical attention and anti-venom is essential.

5. Stonefish can survive up to a huge 24 hours out of water, which is an uncommon trait among fish.

Interested to find these critters or to learn more about the fish species in your area?

The AWARE – Fish Identification Course might be just for you.

How to Make Responsible Choices at the Seafood Counter

The Sarcastic Fringehead is One of the Ocean’s Strangest Fighters