A Brief History of the Recreational Scuba Regulator 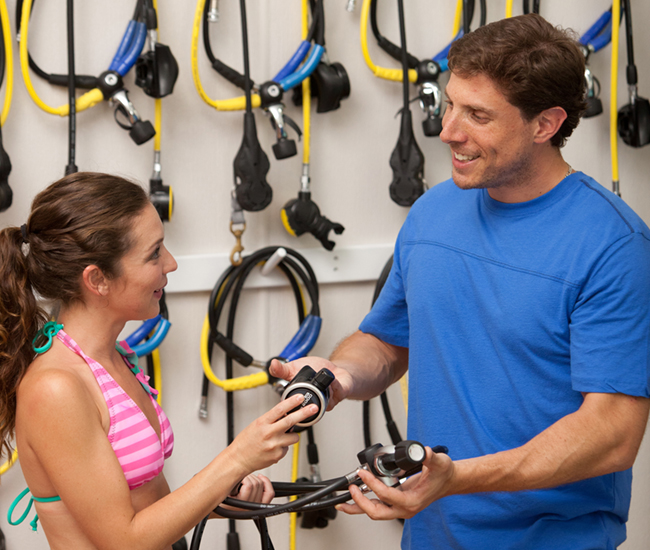 How did we get here? In the interest of cherishing our history and acknowledging diving pioneers, here is a brief history of the evolution of the scuba regulator.

The demand valve is the starting point for the scuba regulator we know today. A Frenchman named Benoît Rouquayrol was the first to dream up (and patent) the concept of the demand valve in 1860.  First developed for use in smoky rooms and poisonous mines, the demand valve wasn’t used underwater until Rouquayrol met  French Navy Lieutenant Auguste Denayrouze. Together, the two made a “regulator” for divers to use underwater with surface-supplied air. It was this which inspired the diving rigs in Jules Verne’s 20,000 Leagues Under the Sea, the highly acclaimed science fiction novel published in 1870.

Although compressed air cylinder systems had been developed prior to 1943, these were free flowed or hand controlled. In 1943, the Aqua Lung system was the first practical system to use a demand valve to deliver a diver compressed air from a cylinder. A ground-breaking development, the single-stage, double-hosed “scuba-set” placed the demand valve and exhaust valve behind the head.

For the first time, divers could swim without being connected to the surface, all because the Aqua Lung could take high-pressure air and step it down to a pressure divers could breathe.

In 1951, E.R. Cross invented the “Sport Diver.” This is said to be the first modern two-stage, single-hose regulator, but at about the same time in Australia, Ted Eldred designed a similar system called the “Porpoise.”

People still debate which of these two to credit with the single-hose regulator.

Many companies started to independently produce single-hose scuba regulators. Sam Le Cocq, in partnership with Sportsways, made the “Waterlung” in 1958. This became the first popular single-hose regulator.

In 1958, engineers from Sherwood Manufacturing modified the piston regulator for underwater. Several other manufacturers adopted the piston design over the other widely used diaphragm design.

Today, materials and size of scuba regulators differ from maker to maker, but when it comes down to it, the mechanics are surprisingly similar to the regulators made 60 years ago.

If you have insight into any regulator history not included here, we welcome you to share it in the comments!

To learn more about the mechanics of the scuba regulator, enroll in a PADI Equipment Diver Specialty or check out the PADI Equipment Specialist Touch, downloadable on your tablet.

A Brief History of the SS Thistlegorm