Around the world, the ocean and its inhabitants face a daily battle with trash, from tangled fishing line to bottles and plastic. When this deadly debris meets with marine life it traps, entangles and injures them, or is even mistaken for a tasty snack. This leads to prolonged suffering and, all-too-often, the creature’s eventual demise.

Fortunately, there are also many cases where divers have intervened in order to rescue casualties, from swift line-cuts to full-blown rescue operations involving treatment, rehabilitation and release. Take a look back at these incredible success stories for five different ocean creatures, each rescued from the perils of discarded fishing line, hooks and ghost nets.

This clip from Secrets of Shark Island was filmed in the Revillagigedo Islands, 200 miles off the coast of Mexico. A group of divers discovered a giant whale shark with an old commercial fishing rope tangled around its body and pectoral fins. The entanglement may have been causing the animal suffering for several years.

Within 30 seconds one diver came to the rescue, cutting the rope and removing it in one swift action while the whale shark remained calm and still – as though it knew the diver was there to help. “It was a moment of pure joy” states the narrator – and we’d bet the whale shark felt the same way.

Marine biologist and photographer Dr. Caine Delacy learned that a baby manatee had fishing line around her right flipper that was not only restricting her movement, but likely causing pain. Working alongside teams from the Bahamas Marine Mammal Research Organisation (BMMRO) and Atlantic Resort, Nassau, he joined a full scale rescue mission to save baby Sayle.

Both manatees were coaxed into a small waterway, contained and lifted out of the water, ready for the veterinarians to get to work removing the debris and treating the wound. The line was wrapped three times around the flipper and had cut an inch into the flesh in places – but after removing the line, giving the wound a good clean-up and applying antibiotic treatment, both mother and calf were released safe and well. 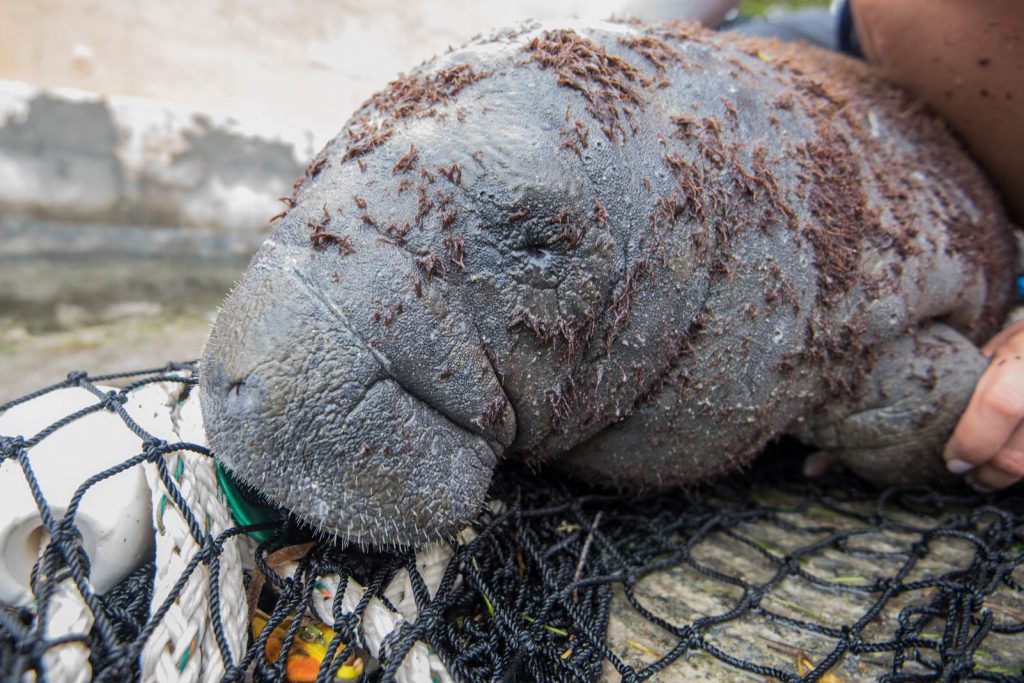 When Jane Headley went diving in the Philippines in 2014, she never expected to have an encounter as memorable and emotional as this one. Spotting a manta ray with fishing line wrapped around its wing, the dive guide ‘GL’ moves in to help. At first, the manta flinches, but with each attempt a little more line is removed. By the end of the rescue, the manta remains motionless while the final pieces are finally gone – what a relief for everyone involved!

PADI AmbassaDiver Robert Ochoa also filmed a similar rescue this year in which a manta ray was entangled in line and multiple fishing hooks – click here to watch the video.

The Olive Ridley Project was initiated in response to large numbers of Olive Ridley turtles being entangled in ghost nets in the Maldives, with dehydration, amputations and deep lacerations just some of the injuries sustained. Dedicated teams are working towards rehabilitating rescued turtles in the Maldives, Sri Lanka and India as shown in this incredible video where not just one, but two entangled turtles were rescued and released by Olive Ridley team members.

In another video that viewers may find distressing to watch, the effect of plastic debris is clearly shown as scientists painstakingly remove a 10-12cm length of plastic straw from the nostril of a turtle.

In Hawaii, Keller Laros noticed a dolphin had a fishing hook and line embedded into its left pectoral fin and signalled for it to come closer. Amazingly, the dolphin responds by swimming over to the diver and allowing him to carefully remove the hook and cut the line free.

The dolphin appears to be deliberately maintaining a fixed position right in front of Keller so that he can get the job done – an incredible interaction between a wild creature and a helpful human being.

Although these videos are inspiring and happy stories from successful rescues, they are equally a startling reminder of how dangerous our trash can be to marine life. These five creatures were lucky, there are far more who are not.

As a diver, you can help combat this issue by joining a Dive Against Debris™ survey with Project AWARE. Not only will you give your dives added purpose by cleaning up your local dive sites, but the research gleaned from the surveys help to influence policies and drive change needed to stop trash from reaching the ocean in the first place.