All photos by Mikko Paasi

It was a hot sticky night in the Gulf of Thailand. The date, June 12th 1942. The Burma Maru steamed into the night, zigzagging its way along the coast. Most of the young crew were in their quarters at 04:34 hours, unaware of the horrors of war that were about to befall them.

Waiting silently in the swell, the USS Swordfish was watching her every turn. Holding, until her commander saw the eight moment to strike. Silence befell the swordfish, then the unmistakable sound of the explosion, a signal of their success.  The Burma Maru crew were aware of their brush with death moments earlier, but now they were about to be thrown into the front line.

Three years ago, I first came across the story of the Burma Maru and, after a chance encounter with a Thai fisherman resulted in two GPS marks close enough the the wreck of the USS Swordfish to raise a flag, I was keen to mount an expedition to Cambodia.

Still, it took two more years before our team loaded the truck ready for the adventure. Joining me was my buddy Leon from Davy Jones Tech, and Mikko and Ivan from Koh Tao Tec Divers who would be filming the journey.

We set off from Chumporn at 6:00am and 25 hours later we met the rest of the team – Dennis from The Dive Shop Cambodia who were supplying logistics and CCR diver Oliver from Bangkok, evening the numbers.

After a good night’s sleep we blended gas. The CCR team used a combination of gases, on board 15% o2 and 35 helium, allowing easy cell validation at depth. Off board bottom bail 19% o2 and 35% helium, giving a smooth transaction and manageable narcosis loading should we have to bail out. We also carried a 50% nitrox to accelerate decompression. The open circuit team were using19/35 trimix 50% and 100% o2.

That evening we set off. Heading south west the 60 nautical miles at 6 knots would have us on the mark at 06:00, meaning we had time to rest up. 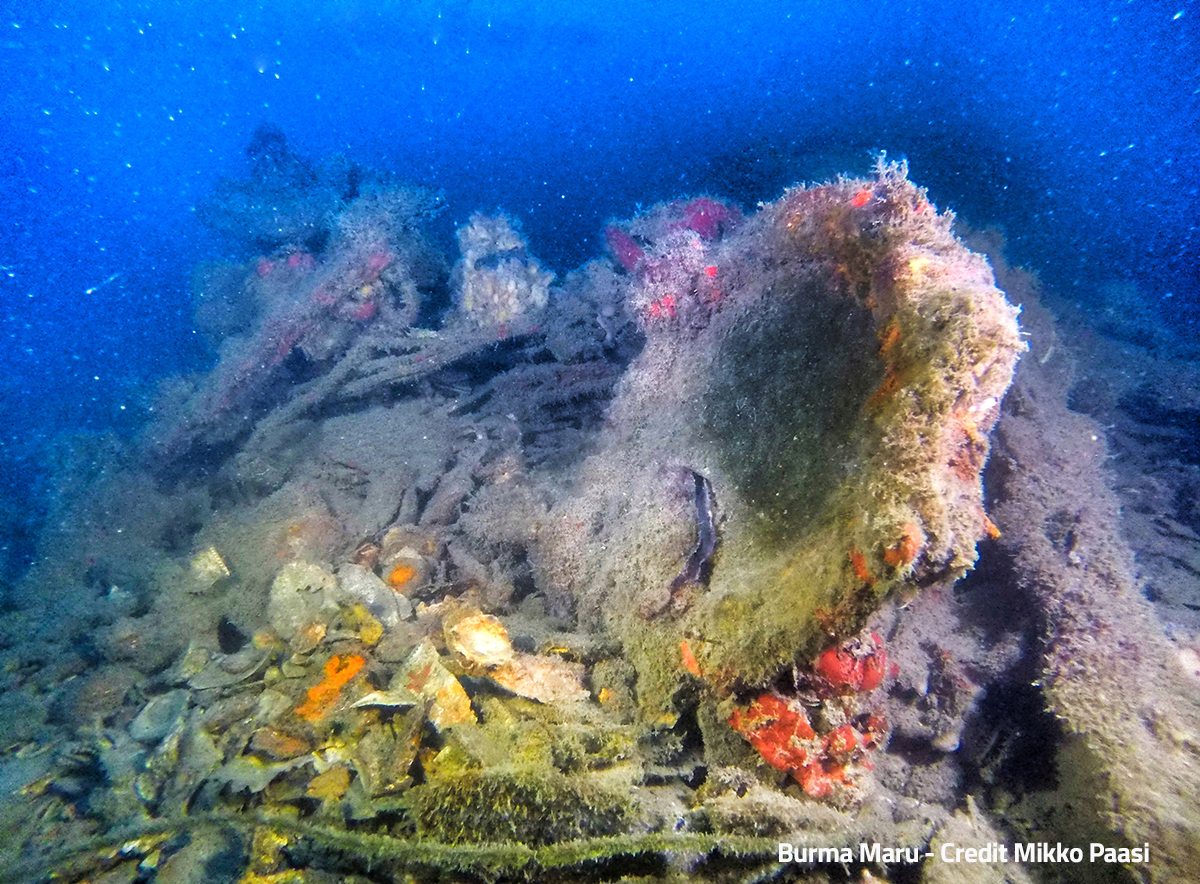 A full 48 hours after we set off we arrived at our mark.

The boat we were using was not equipped with a sounder but we overcame this by putting the transducer on a metal stick, then securing it to the side. Projecting 2 metres below the surface, the coordinates were converted to decimal minutes from 60th of a minute. As we zeroed the mark, I wondered how accurate they were but I needn’t have worried, within 15 minutes of searching we had a large return on the sounder screen!

The sea was deceptive and locating the submerged Burma Maru with the sounder proved to be easier than tying in. The ocean can be unwilling to give up its secrets and twice our team were blown off the wreck, held off by a strong current at depth.

Ivan and Dennis were last up in the cycle, the only team diving open circuit. Honestly, we didn’t hold out much hope for success but they did a great job – swimming into current, holding depth and running a reel from the shot. They managed to secure a line to machinery at the stern. Unfortunately, due to elevated respiration as a result of the current, they had to cut their dive short, unable to identify the type of ship we were on.

Leon and I were up again. We readied our equipment, completed our pre breaths and jumped in. The conditions at the surface were perfect, not a ripple. After bubble check and descent checks were done, we descended into the blue. At 35 metres we hit the thermocline and the current kicked in with a vengeance. Finning hard following the line, we spotted the unmistakable shape of the Burma Maru’s stern. She was huge!

Staying low we moved towards the bridge area. Everywhere we looked we saw evidence of a ship at war, preserved for only a privileged few to encounter. 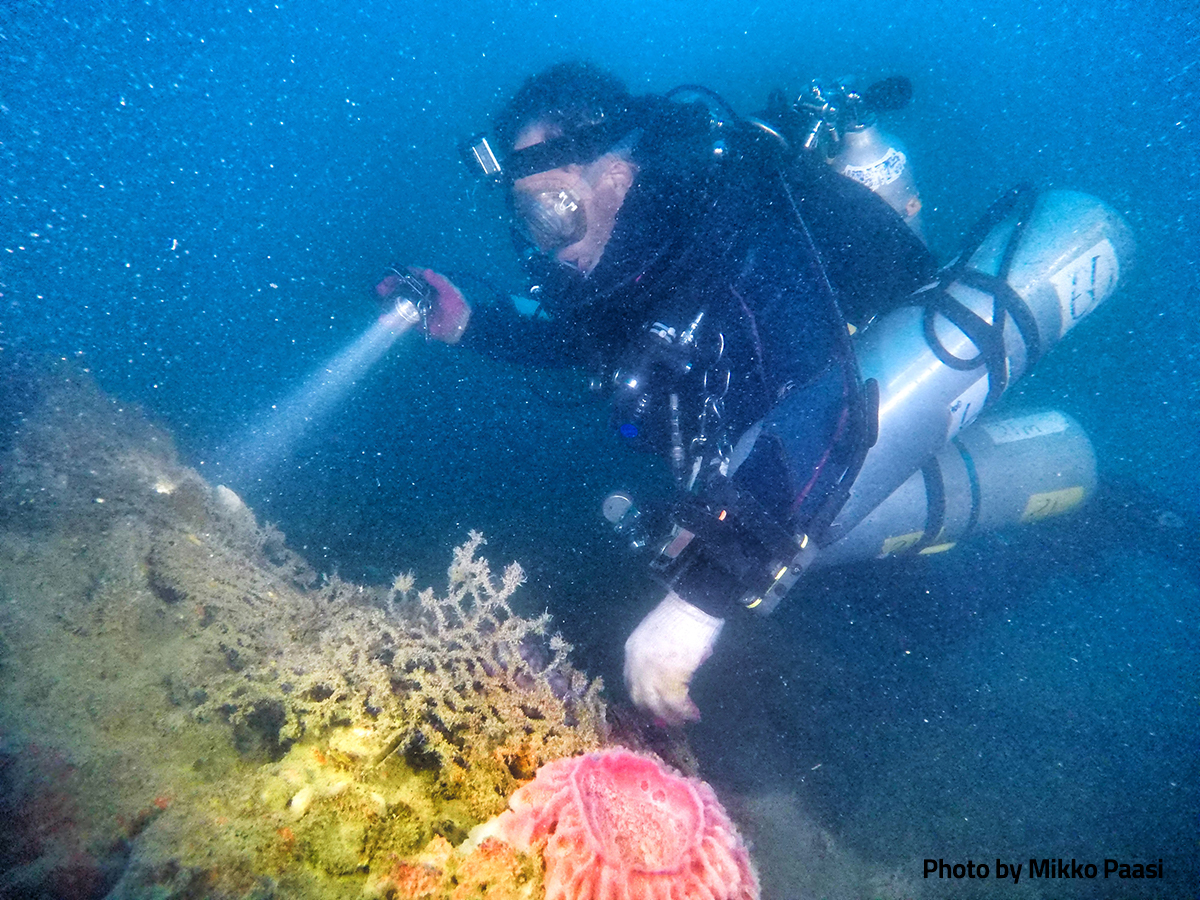 All too soon, it was time to leave.

We drifted along the top deck; the current moving us towards our assent line, pausing at the bottom to take one last look at the stern. They don’t make ships like this anymore. We reluctantly left the bottom and started our long ascent, completing our decompression obligations.

We waited for Mikko to surface with his images, convinced we had indeed found the Burma Maru. After watching his video there could be no doubt in our minds.

The night approached quickly and I slipped into an easy sleep, knowing we’d just marked the position of one more casualty of war.

In the war record, Commander CC Smith had one of the torpedoes from the second attack strike just forward of the bridge which resulted in the ship stopping dead in the water and, over the next 12 minutes, settling by the bow. This next dive would be our last chance on this trip to look for evidence of this.

Again the current was racing and this time the visibility on the bottom was 10m (32ft).  Moving past the chimney stack we stumbled over a big brass voice communicator and then the bridge telegraph – a clear sign of our position in the wreck. Close to our turn time I looked over the edge towards the bow. There was damage on the port side, but the visibility was only good enough to watch the twisted metal disappear into the cloud. Was the bow still attached or had it been cut off during the savage explosion?  Our time had run out leaving this question unanswered, until the next team lucky enough to make this journey.