Though estimated to be extinct for nearly 2.6 million years, the Megalodon is said to be one of the largest known predators to ever swim the ocean deep. These incredible creatures would reach nearly 59ft (18m) in length, weighed about 65 tons, and would eat whales as part of their diet. The largest estimated jaw size of a Megalodon is 9ft (2.7 m) tall and 11ft (3.4m) wide – can you imagine? O_O 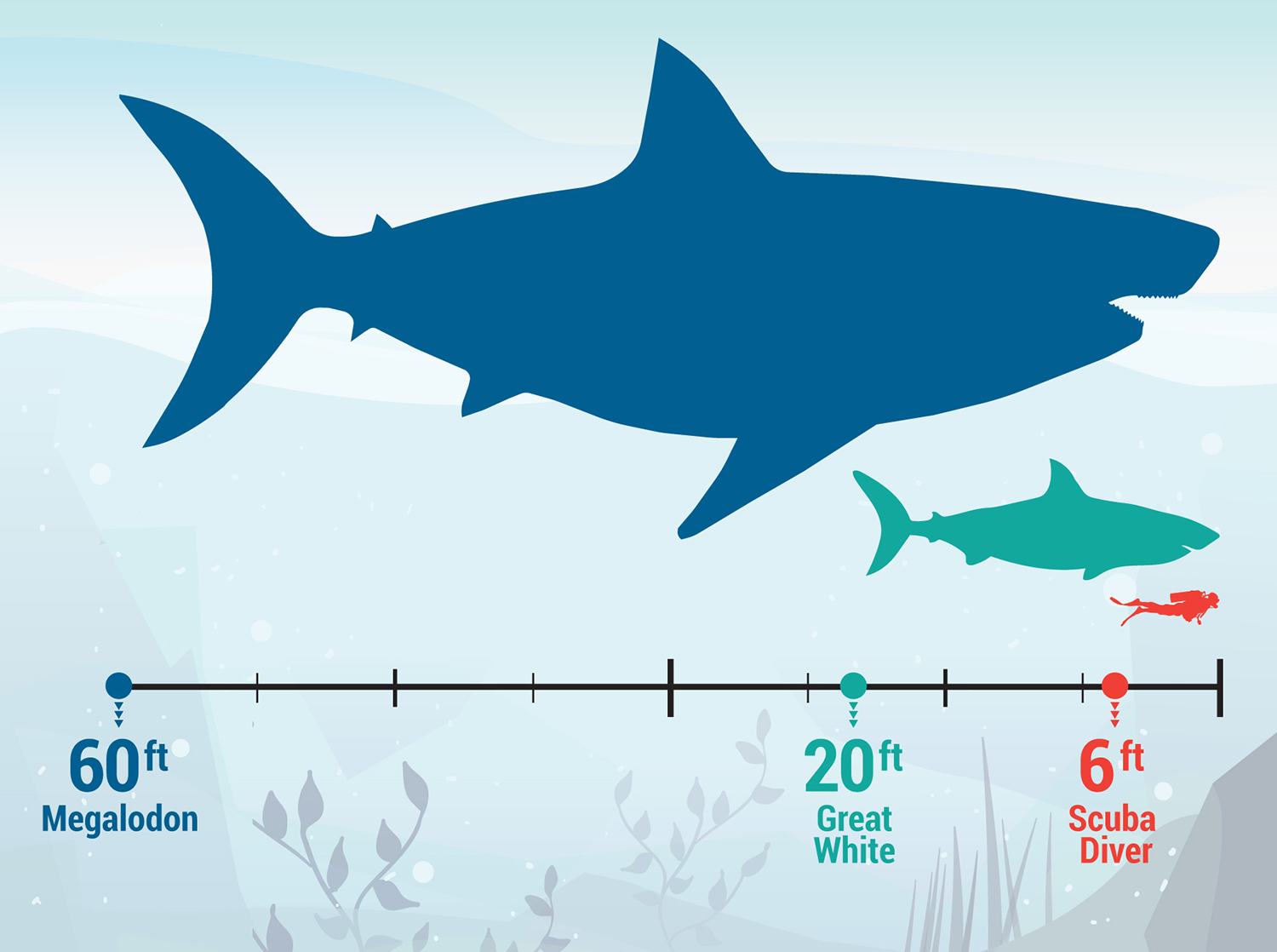 Because sharks’ skeletons mostly consist of cartilage, fossilized teeth are about the only part left of these mysterious creatures for us to study and see for ourselves. In fact, scientists can tell a lot about the Megalodon just from their teeth, like where they lived and what size they were. Experts have found that juvenile Megalodon were about 20ft (6m) long –about the same size of the largest great white shark ever recorded. Even earlier than the 1600s, Megalodon teeth were thought to have been petrified dragon tongues.

The official state fossil of North Carolina in the United States is the Megalodon tooth and they range in size, however, the most sought after fossils are the 7” teeth. 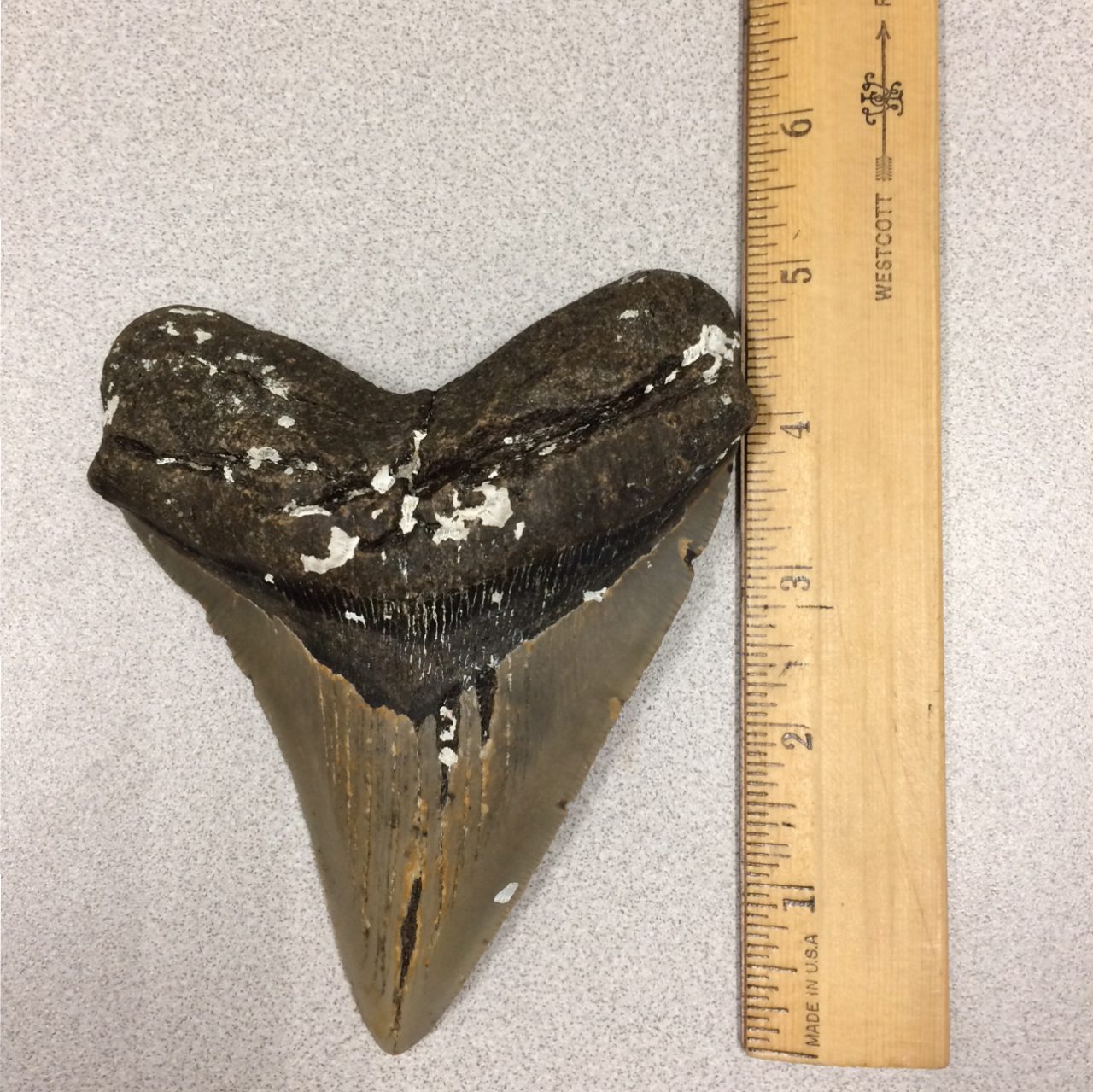 PADI Marketing Executive Kyle Ingram hails from Raleigh, North Carolina and worked and dove in Wilmington, where he spent many of his early diving days scouting the Atlantic Ocean for these prized fossils. With much patience and determination, he’s been lucky enough to find himself 23 whole Megalodon teeth over 40 miles offshore in about 90-110 ft (27-33 m) of water.

We asked Kyle about the conditions of the dive site when searching for these gems, he explained, “The bottom consists of mostly rubble that has a lot of growth like algae, calcium, barnacles and other biological matter. This makes it difficult to pin point teeth. 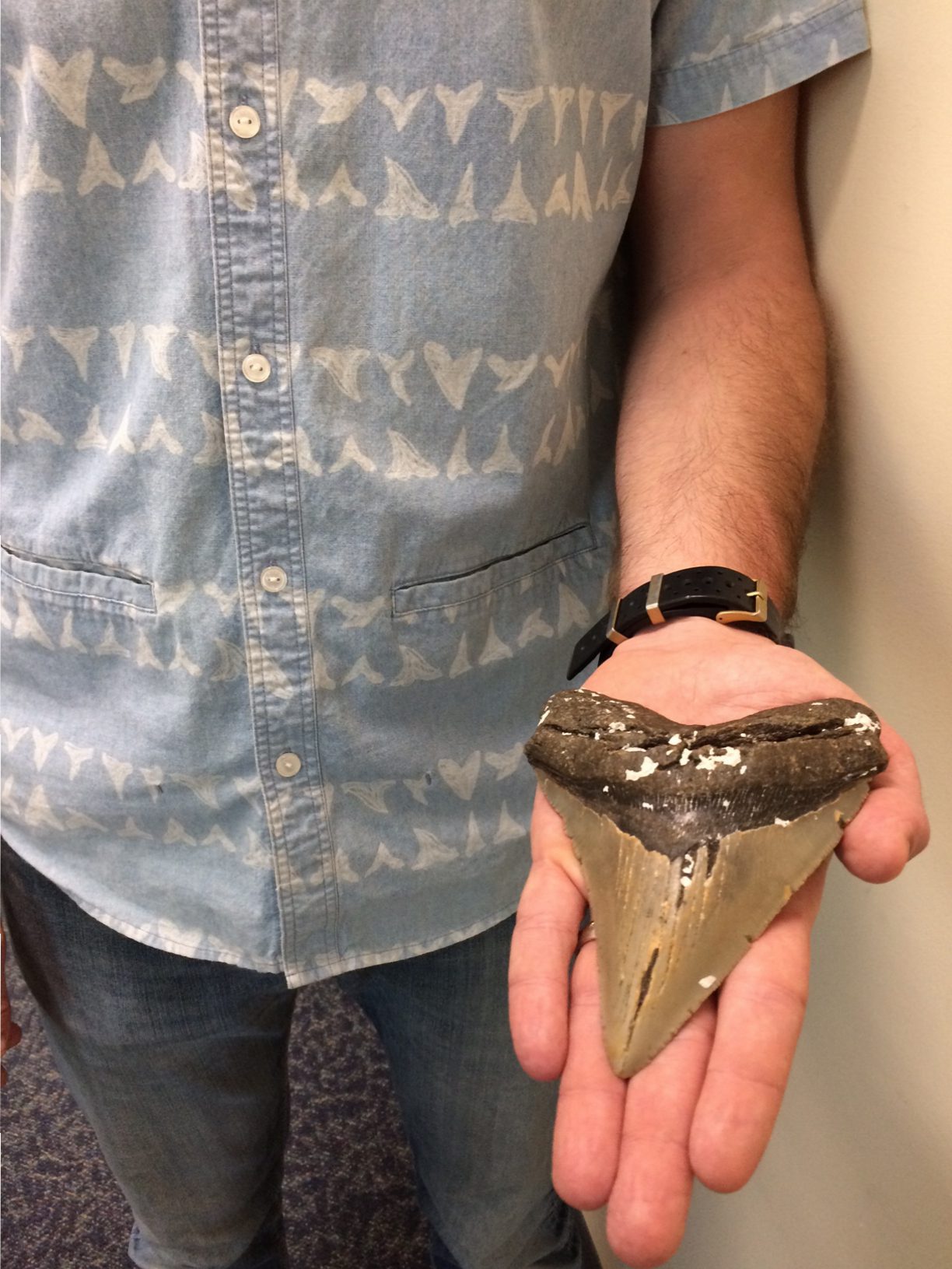 “While searching, you have to look for triangular shapes or flat edges in the rubble and then inspect them once you’ve returned to the boat to see if it is in fact a Meg tooth.”

When it comes to finding the best fossil out there, the more enamel and visible serrations, the better. The largest tooth he has found in his 10 years of searching measures 6.25 in (15.8 cm). Since they have all been rolling around the ocean for millions of years, it takes time to carefully clean them in order to properly inspect their worth:

“Best way to clean them is with a soft bristle brush, warm water and mild detergent. The use of vinegar and other acids can destroy the sheen, color, enamel and integrity of the tooth. A small brass dental pick can be used for hard to reach areas.” 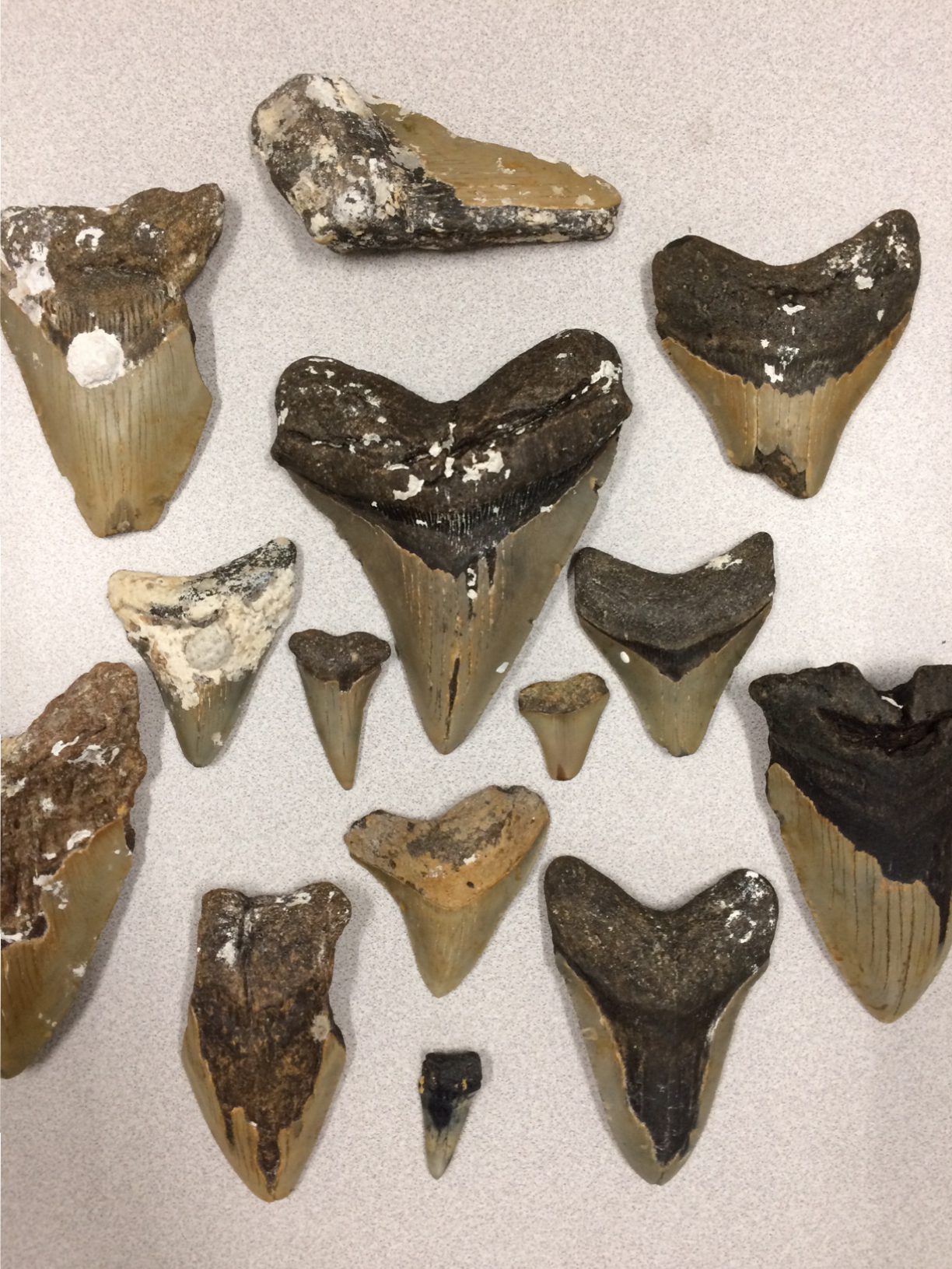 For Kyle, the best part is sorting through his treasures at the end of the dive, “The most rewarding part of Megalodon tooth diving is hauling a load of teeth and rubble back to the boat and spreading it all out on the deck to see what was actually recovered. I also really enjoy the cleaning process. Sometime it’s hard to tell exactly how complete the teeth are when they are covered in barnacles and growth.”

With a solid collection of these massive fossils, Kyle highly recommends the following training and gear to help in your search:

At the end of the day, once you start, it’s hard to stop:

“It’s a really addictive dive activity and once you find one you’re hooked. If I hadn’t travelled off to teach diving in Hawaii in 2009, I’d still be out there recovering fossils.” 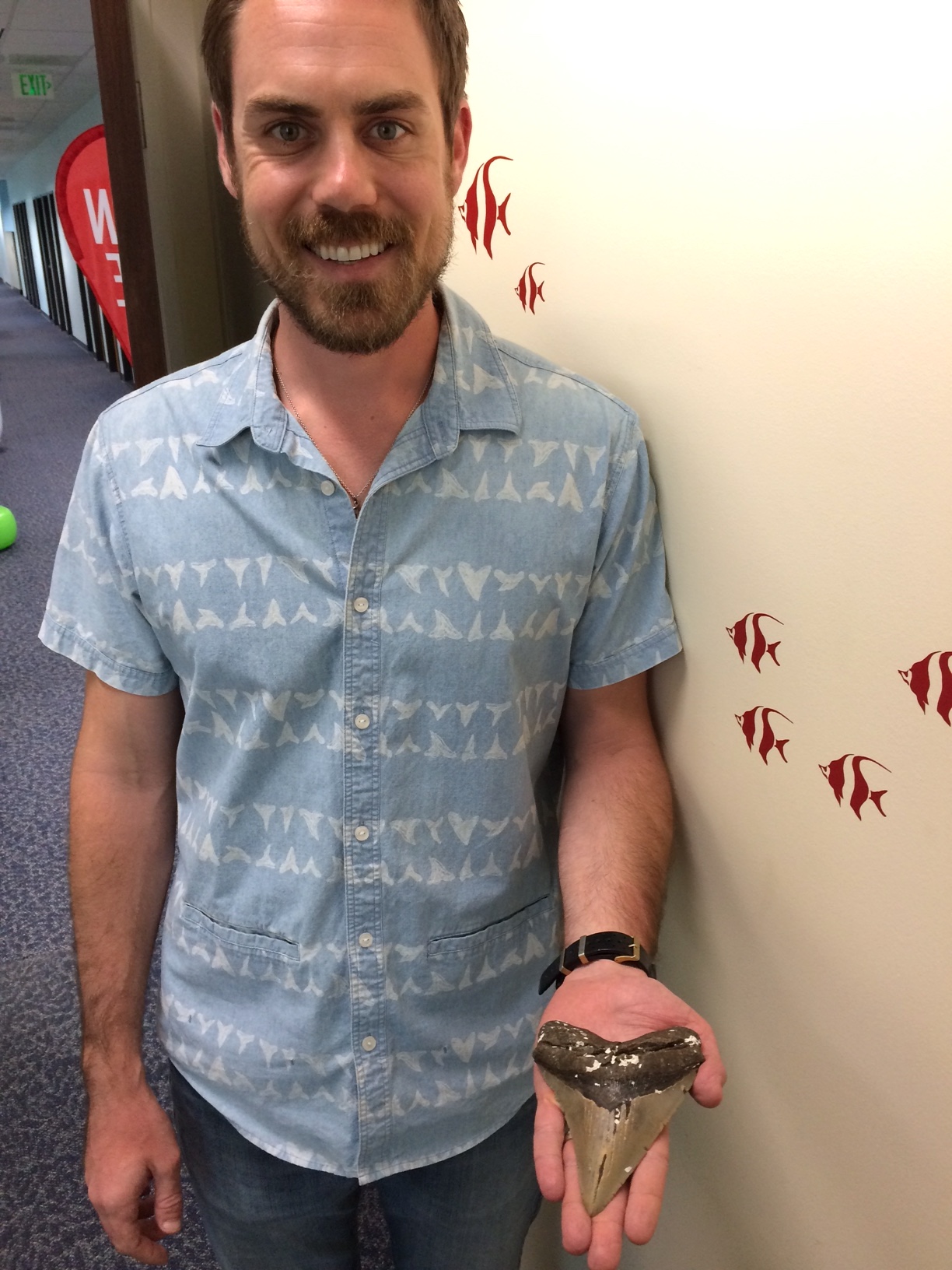 Cooper River in South Carolina, USA is also a fossil bed for prehistoric Megalodon teeth. Check out these 3 things you will need before diving there.