To a diver, a jellyfish can inspire both awe and fear. They are undeniably one of the loveliest creatures in the sea, undulating with a graceful rhythm and trailing an elegant veil of oral arms. Yet, their sting is terrifying, especially if you happen come across a fierce one without a wetsuit for protection. But there’s much more about jellyfish that’s surprising.

Jellyfish are the most efficient swimmers we know.

Sure they don’t move fast, but they do move well. Compared to a muscular salmon, moon jellyfish use three and an half times less energy to travel the same distance. Their secret is in their wiggle, which creates a zone of low pressure in front of the jellyfish that sucks the animal through the water like pulling soda up a straw.

A jellyfish’s stinging cell fires with the fastest motion in the animal kingdom.

When you drop a pen to the floor that’s 1 g. A Ferrari accelerates from 0 to 60 mph in 3 seconds. That’s 3 g. A jellyfish’s stinging cell fires with an acceleration of 5 million g. It takes just 700 nanoseconds for the stinger to hit its mark.  Jellyfish and their cousins, corals and sea anemones, have about 30 different styles of stinging cells, adorned with all variety of barbs and spines.

If you look very closely at the edge of a jellyfish’s umbrella, you’ll see small organs called rhopalia. They contain the jellyfish’s sensory structures: not just light organs, but also a balance organ, a current sensor, and chemical receptors. Box jellyfish have four rhopalia, each with 6 eyes, making for a total of 24. Eight of those have a fully functional lens, a retina, and an iris that opens and closes like ours does when it gets brighter and darker.

Sea turtles are well-known for eating jellyfish and leatherbacks live their whole lives on a strict jellyfish diet. The world’s largest bony fish, the massive mola mola or sun fish, also favors jellies. And recent research has discovered that lots of fish, including tuna and bream, eat their share of jellies too. New studies have found that even penguins and albatrosses have a taste for gelatinous fare.

Juli Berwald’s new book SPINELESS: The Art of Jellyfish and the Science of Growing a Backbone is now available. For more about her book or writing, please see Juliberwald.com. 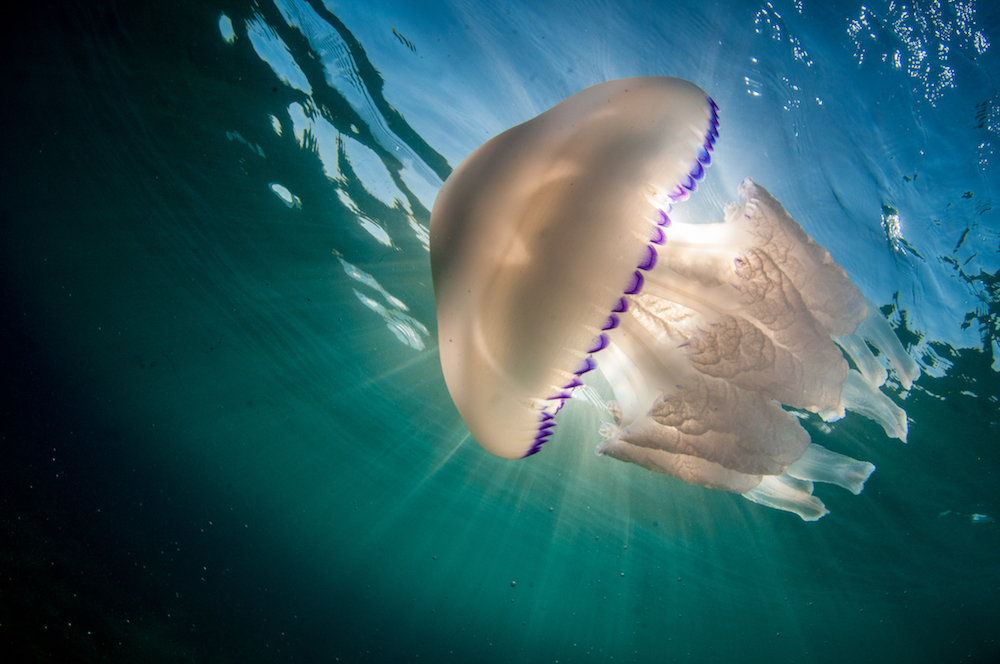 You’ve Been Stung by a Jellyfish – Now What?

What’s in a name? 11 Sea Creatures that Look Exactly How They Sound