On the 24 March, the Thai government declared that there would be restrictions on travel and business operations to combat the growth of the COVID-19 pandemic. As a result of this, all businesses on the Phi Phi islands were closed and much of the Thai and foreign workforce that were unable to leave the island, were isolated for the coming months. Social distancing measures were quickly enforced, travellers and local Thai’s limited interaction and social gatherings. Many foreigners that were stranded on the islands were from the diving industry and unsure of what the restrictions on travel would mean in regards to renewing visas and ensuring that they were not going to get into trouble if they were unable to extend them in time. Fortunately the Thai government recognized the issues at hand and made the necessary extensions to visitors to the ‘Land of Smiles’, regardless of whether they were a tourist or long term expat.

Meanwhile on the Phi Phi Islands, it was obvious that the huge workforce remaining had nothing but time on their hands. A project was soon formed by a diving operator on the island to manage volunteer divers to create a remarkable clean-up operation in Tonsai bay around the pier area.

On the 20 April, The Adventure Club initiated the clean-up operation at the pier. In respect of the rules on social distancing only three groups of five persons per hour, were permitted to work at different positions at the pier. Three divers in the water with two persons supporting each group on the surface. Each team worked for one or two hours and then was replaced by another team member. This team rotation continued throughout the day.

“The cleanup work is bringing a full package of positive emotions. First of all, it’s the kindness between people, no matter what nationality, age, occupation or social status we have. It’s the feeling of being useful – helping the environment, working together as one team, having the same goal and being able to make a difference and, hopefully, influence the future behaviour of people towards respecting the nature and the sea. It is the excitement of having the possibility to be under water, which for us, divers, is the most important, calming and needed thing in the world.” – Ilze Grïnvalde, pro diver volunteer 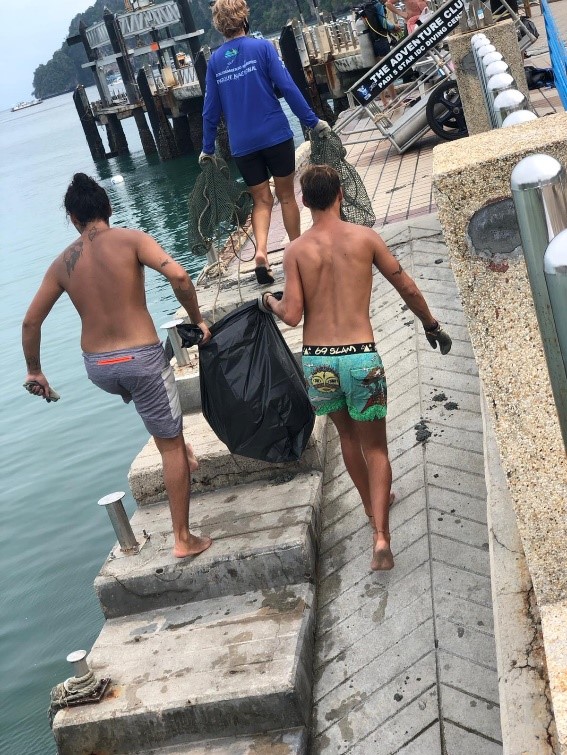 The project was overseen by the manager of The Adventure Club, Tero Kempas, whose job is to ensure that the crews are always maintaining good social distancing and operating safely. The main objective of this project was to attempt to make the pier area as pristine as possible. Since the pier is the main arrival point for all of the supply boats, it means the divers have their work cut out for them.

“It feels good to be busy, and rewarding at the same time as the pier area of Tonsai Bay has collected a lot of debris over the years which has been impossible to clear until now due to safety issues with ferry and cargo boats when the pier is in use.  It was well organised which meant the social distancing rules that were enforced did not impair or impact the work. Dive cleanups usually involve large groups of divers and support team, I don’t believe a cleanup has been organised in such a way in Koh Phi Phi before, nor been so effective (since the Tsunami cleanup)” – Caroline Lecky, the co-owner of Blue View Divers 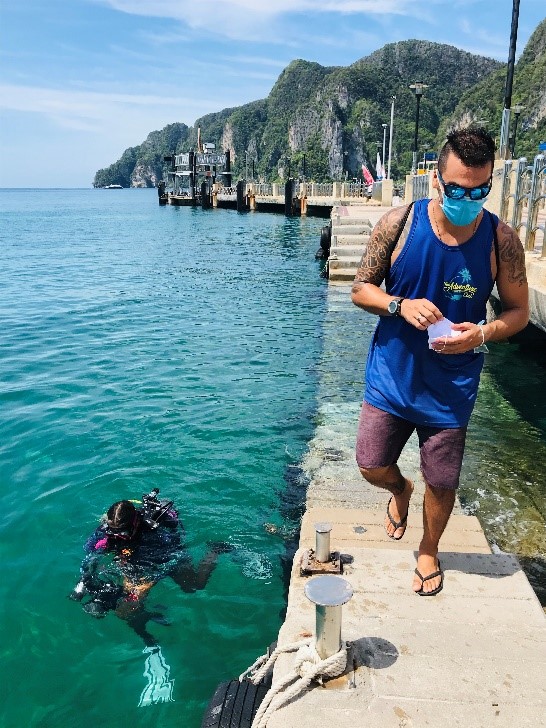 All manner of materials were brought up from the ocean; bottles, bags, plastics, concrete blocks and many more. Over the course of nine days, the team were able to raise 13,197 kg/29,094 pounds which included 322 tyres. The local community have been exceptional by supporting the volunteers with food, water and refreshments. The project has been put on hold for two weeks but is due to resume shortly.

“It’s incredible to see how the attitude between locals and farangs are becoming more welcoming, supportive, and understanding.  If there is one thing this unusual situation is giving us – it’s the chance to be united. And it’s a wonderful feeling.” – Ilze Grïnvalde, pro diver volunteer 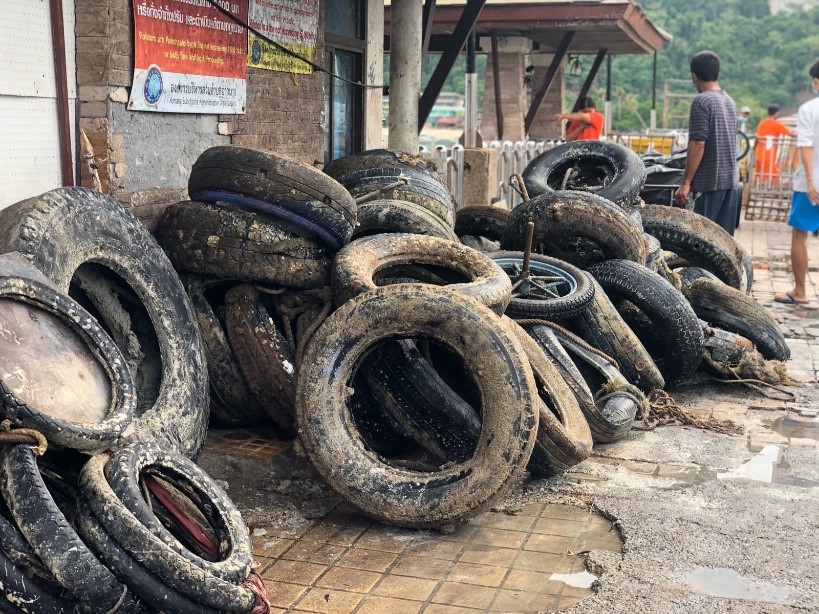 Although the current global COVID-19 situation has shut everything down, this project has given the Phi Phi Island community an opportunity to come together and make a difference. Thanks to nearly a hundred diver and non-diver volunteers from over 24 countries, devoting their time and energy, when everything settles and travel is resumed, visitors to the Phi Phi Islands are going to find them more beautiful than ever.