Lloyd Jones is a HSE (Part 4) Media Diver, underwater videographer and PADI Instructor based in Pembrokeshire – the UK’s only Coastal National Park. As one of only two AWARE Shark Conservation Instructors in West Wales and owner of Kraken Productions, Lloyd is spreading the word on the beauty, sharks and incredible diversity of his local coastline. In this interview, he tells us more about his love of Pembrokeshire, filmmaking and his work on Britain’s Sharks. 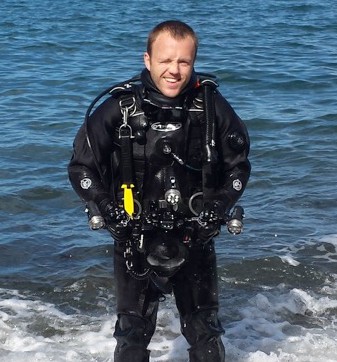 When did you first learn to dive, and what inspired you?

I gained my PADI Open Water Diver qualification in 2006 in Pembrokeshire, West Wales. My father is a PADI Staff Instructor and his diving stories of tropical locations, colourful ecosystems and old video footage inspired me to start my own diving adventure. I remember being captivated by this mysterious aquatic world, I had to be a part of it.

How did you get into underwater videography? Any tips for aspiring divers?

We have a universal saying when it comes to underwater photography, “No picture, No proof”. I got so fed up of hearing this that I started capturing images of everything from sea hares to seals.

After a while I found that my underwater images didn’t do the subject any justice, so I turned to the video mode on my FujiFilm F30 camera. I found that filming the behaviour of the subject was far more fulfilling. After completing a Media Studies course in college, I had a better idea of storytelling, filming and the editing process.

With advancements in underwater compact cameras, anyone can pick up a broadcast quality camera and start capturing amazing footage. Before you start filming underwater you need to be comfortable in your diving ability. Improve your buoyancy and keep your equipment as streamlined as possible. Always practice filming in a swimming pool before you head out to sea; bumping around on the bottom of the pool is better than bumping around on the reef. 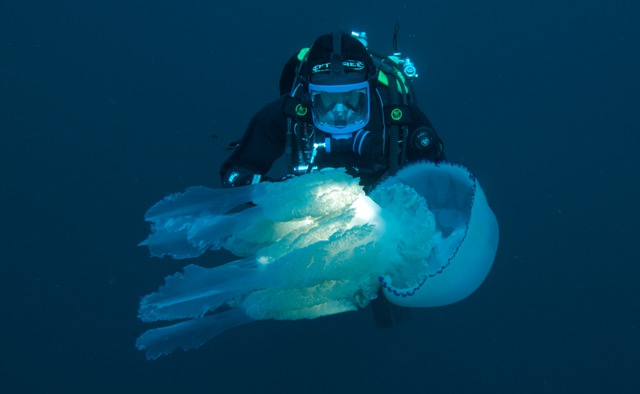 What is it about the Pembrokeshire coast that captivates you as a diver and filmmaker?

Pembrokeshire is an underwater videographer’s dream. You name it, we have it – from marine reserves, sharks, wrecks, reefs and shore dives to inland quarries. The marine life is second to none. After ten years of diving the same shore dive sites, I still get excited when I descend with my camera, you never know what you will find.

There is something special about diving a site all day and then returning at night to find a brand new environment. Pembrokeshire has a handful of shore diving sites that are famous for night dives. I could tell you all about them, but that would ruin the surprise.

What’s your favourite dive site and why?

It has to be St. Brides Haven in Pembrokeshire. This is where I was first introduced to the underwater world. The dive site is breathtaking, and with its flat sandy bay and enclosed location it’s an ideal place for divers of all experience levels.

It is home to cuttlefish, jellyfish, and small sharks. It has kelp gardens with hidden caves and gullies and is also the location for a spider crab mass migration the likes of which you may never have seen before. I enjoy introducing divers to St. Brides as you never know what you will find. Every dive is an adventure and after ten years of diving this site, I am yet to discover all of its secrets. 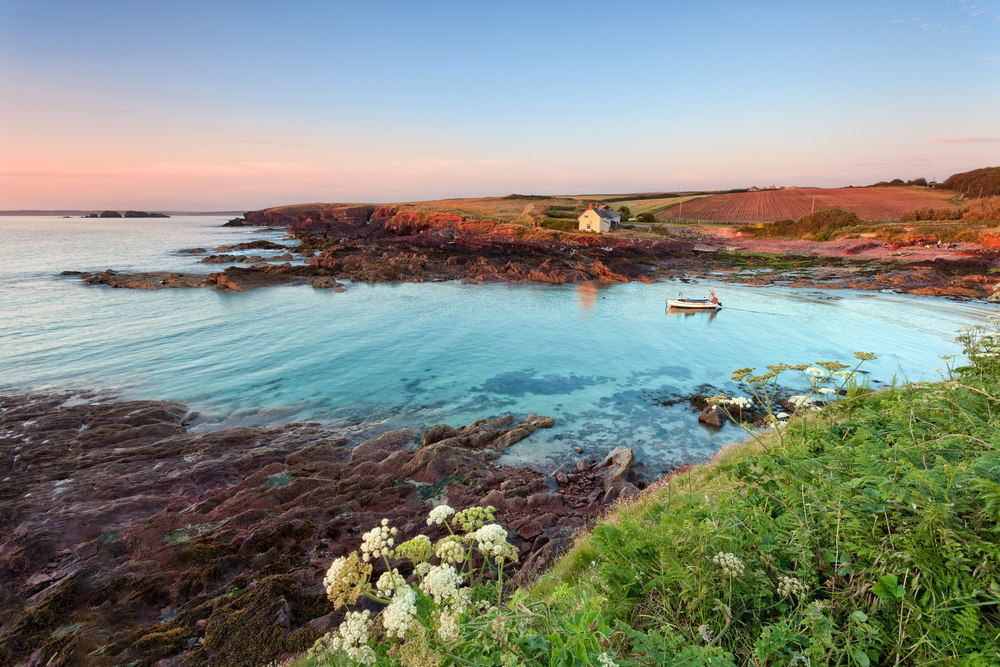 You’re clearly passionate about conservation, and sharks in particular. What is it about them that fascinates you?

I love sharks. I came face to face with a small-spotted catshark during my Open Water Diver course. It glided out of the kelp, circled around me and gently rested on the sand in front of me. I was immediately captivated by it, here I was only minutes into my first dive and I had seen a shark!

Sharks are just superb, there is something hypnotic about the way they move effortlessly through the water column, they have evolved over millions of years into the ultimate predator. They deserve our respect and more importantly, our protection.

You are also an AWARE Shark Conservation Instructor – tell us more about the course, and what students can expect?

Since 2013 I have been diving with sharks in the Celtic Deep filming their behaviour and interactions with divers in order to create a safe diving experience. I am proud to be the first PADI Instructor to gain the rating in Pembrokeshire, and Haven Diving Services has the only two AWARE Shark Conservation Diving Instructors in West Wales. I love educating divers on the shark species that can be found around the UK coastline.

Working alongside Haven Diving Services, we have incorporated my experience of diving with sharks in the Celtic Deep to create an AWARE Shark Conservation course that would be unique to West Wales.

The course can be split over two days covering classroom sessions and open water dives, or a one-day intensive course. Students will learn about the value of sharks and what is causing the rapid loss of shark populations. We look at what shark species we have here in the UK and talk about shark biology. We also discuss conservation issues, diversity of sharks and shark diving techniques and code of conduct.

Once the theory sessions are over the real fun begins. We head out to the Celtic Deep for a full 12-hour boat trip, taking in the scenery and marine life around the Pembrokeshire coastline. After arrival, divers can observe the sharks before entering the water for an afternoon of shark interactions in a safe, controlled and educational environment. On successful completion of the course students will receive the AWARE Shark Conservation Diver certification.

What do you want to accomplish most by educating the diving community about UK sharks?

What’s the first thing that pops into your head when you think about sharks? For most people it’s the iconic movie score of John Williams, the unmistakable slow repetition of two notes. Coconuts kill more people each year than sharks, and that’s why every time I think of coconuts I now hear the Jaws theme.

I hope to remove the “Man Eating” stereotype associated with sharks by educating divers on UK species and their importance within the marine ecosystem. If we don’t act now we could lose important species. Sharks have been around for millions of years; we are the cause of their decline but through education and conservation we can also be their saviours.

You were involved in the filming of Britain’s Sharks – tell us how that came about?

I had been contacted by Big Wave Productions as they were looking for UK filming locations for an upcoming shark shoot. As it ticked all the boxes for marine life I suggested that they try Pembrokeshire (not that I am bias in the slightest). With my HSE diving qualification and experience of diving with sharks in West Wales, I was able to be part of the dive team.

We headed out on an exploratory filming trip and the Celtic Deep did not disappoint. We were surrounded by dolphins, gannets, barrel jellyfish, and spent two days in the company of twelve very inquisitive blue sharks. On the strength of that initial trip, a feature length show was then commissioned by ITV.

Britain’s Sharks follows a team of experts as they embark on an ambitious project to return the body of a whale back to the ocean and capturing a giant feeding event of over 60 blue sharks for the first time in UK waters. In the above clip, Plymouth University’s Nick Higgs discusses the incredible results of the expedition.

Did you have to make any special preparations before filming started?

As you can imagine with an operation this big, safety was paramount. Our Diving Supervisor Neil Brock had prepared specialist safety equipment for the dive team and lengthy Risk Assessment forms. We had specialist advice from UK shark expert Richard Peirce, and the entire team was briefed on shark feeding behaviour and codes of conduct.

What video equipment did you use?

While assisting on the shoot I used a selection of video equipment from DSLR, GoPro and Gates POV cameras in order to capture sharks, dolphins and sunfish. Some of the best footage I have ever captured has been on this project and it was with my GoPro camera.

Did anything about the project surprise you or change your perspective on UK diving and our sharks?

On the last dive, myself and Mike Pitts dived with 60 blue sharks – a spectacle that no other person has seen in UK waters. It was truly amazing, the Jaws stereotype of man-eating sharks had vanished and we were surrounded by sharks that were queuing up for an all-you-can-eat whale buffet off the Pembrokeshire coastline.

It was calm and the sharks all waited their turn; if a larger shark appeared it would find its place in the queue and smaller sharks would fall in line. Emmy Award-winning camera operator Michael Pitts had never dived with large numbers of blue sharks in UK waters before, and it was an honour to share that experience with him.

With a 9 meter (30ft) humpback whale carcass buffet we all had visions of hungry sharks thrashing around in the water and aggressively attacking the whale. What we witnessed was the complete opposite. The project has allowed us to showcase a hidden side of UK diving that not many people are aware of. 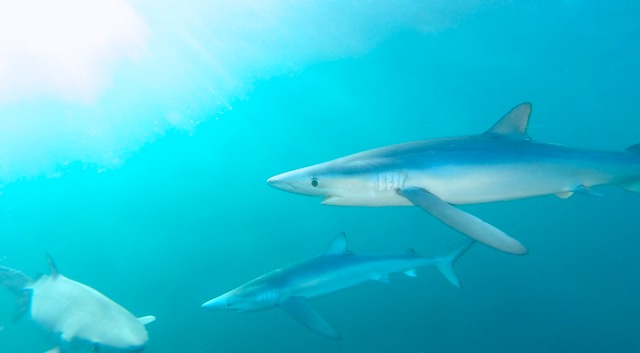 What was your most memorable experience during filming?

Not many people can say this with a smile on their face: bitten on the bum by a blue shark. Now before anyone starts shouting “killer sharks”, I feel it’s necessary to explain what happened.

With four divers in the water all equipped with underwater communication recording devices and a large camera with lights, it became somewhat confusing for one little blue shark, who mistook my behind for the 9 meter humpback whale carcass. After tasting my dry suit he realised he had made a mistake, and feeling rather embarrassed he made his way back to the whale.

Luckily he was only a small male and the damage was mostly superficial puncture marks. Two things instantly went through my head:

What sort of response have you had so far from divers who have seen the show?

The overall response from divers has been great, if anything it seems to have reignited a passion for UK diving in most people. I get replies like “Wow!”, “Why do we have to go abroad to see sharks and dolphins when we have them here in Pembrokeshire” and my favourite, “I didn’t know we had sharks in UK waters”.

We have around 30 species of sharks in UK waters, from the small-spotted catshark (Yes, it is a shark!) to the gigantic basking shark. 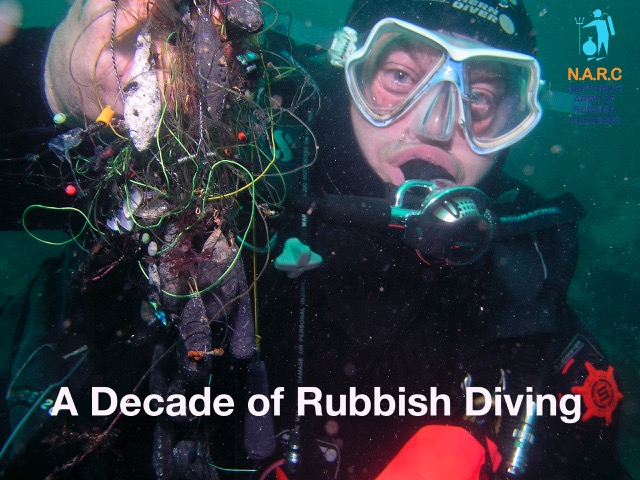 Are there any other conservation projects you have been involved in recently?

Since 2007 I have been volunteering with Neptune’s Army of Rubbish Cleaners (NARC), a dedicated group of voluntary underwater divers. The group is also based in Pembrokeshire and celebrated its 10-year anniversary in 2015. Last year we collected over 150 ghost fishing lobster pots that had been lost by fishermen, a collection of fishing nets and rope weighing over 2 tons, and a fully-intact Mitsubishi Colt car reported stolen and pushed into the sea at a local underwater “fly tipping” site.

Four years ago I started capturing stock footage and creating short promotional films to help raise awareness on the dangers of marine litter and the hard work and determination of NARC volunteers.

Finally, what exciting things can we look forward to seeing from you in the future?

I am constantly looking for the best way to promote the natural beauty of Pembrokeshire’s underwater coastline and its spectacular marine life. I am currently working on a mysterious Pembrokeshire Shipwreck project with ties to World War II, the Pembrokeshire Spider Crab mass migration, and the ongoing work of Neptune’s Army of Rubbish Cleaners.