Birgitta Mueck, one of our PADI AmbassaDivers, shows us the thrills of dive exploration with this exclusive 3-part account of her latest cold water adventures. Sailing through the northern fjords of Sweden and Norway, Birgitta has searched for deep, rare species and pods of feeding orcas. In this final installment of ”Northern Tales” discover her incredible encounters with orcas.

And So The Season Starts

We have now arrived in Vengsøy island, and the local fishermen have told us that only a small amount of herrings have entered the fjords so far. They are all still waiting for the bigger schools of fish to appear, which also influences the migration route of the whales.

We head out from the fjords to have a look a bit further out to sea. The low sun reflecting on the mirror-like ocean surface gives the entire surrounding a warming touch despite the cold air biting both my cheeks and nose. Suddenly, something starts to appear further in the distance. It looks like a blow closer to the horizon. Keen to get a closer look, we change course towards it. I feel the adrenaline rising through my entire body when I, through the binoculars, see the big black dorsal fins gracefully cutting through the surface. There are no doubts about it, they are orcas!

The biggest member of the dolphin family, orcas are toothed whales reaching a maximum length of 10 meters. These highly social marine mammals live together in big, stable family groups. Sometimes called “the wolves of the sea”, but more commonly named “killer whale”, the orcas have a wide range of reputations, from having the souls of humans to the most merciless killers. In earlier days nobody dared to enter the water if an orca was in sight. Today we know more about these majestic creatures. They are not merciless killers, but intelligent mammals specialized in different preys. Found in all oceans, orcas hunt a great variety of preys such as fish, cephalopods, seals, sea lions, whales, sea birds and sea turtles. They are however food hunting specialists, which means that the orcas particular type of prey differs a lot between the different populations. Here in Norway for example, the orcas have specialized in herring which is their main food source. 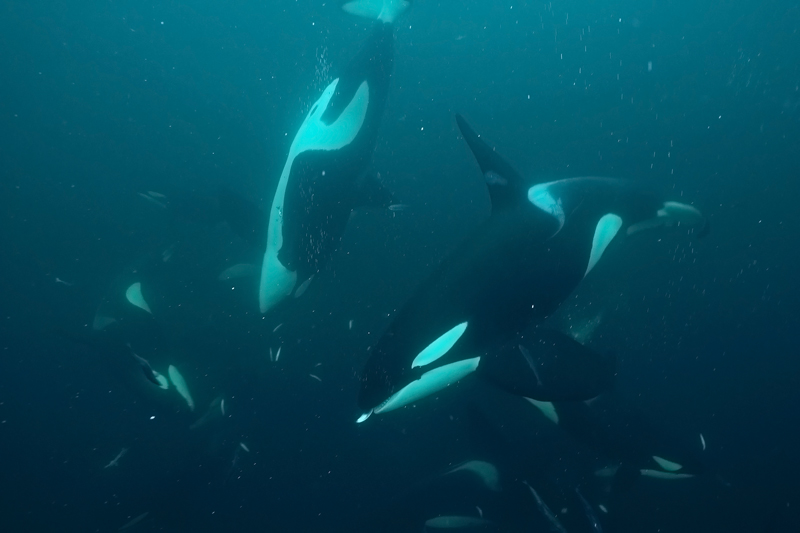 Our boat is now surrounded by hunting orcas, and the sky above us quickly starts to get filled with many hungry seagulls and eagles, who also want their part of the herring feast. Ready in my drysuit, and with the underwater camera in my hands, I slowly slip into the 7°C cold water (yes it got colder!), trying to create as little splash as possible. The loud noise from the screaming seabirds quickly gets replaced underneath the surface by the much more soothing and enchanting variations of sounds that the orcas create. The cold, salty water bites the naked skin on my face, but I quickly forget about it when I see a huge dark shadow in front of me. It is a big male orca curiously swimming towards the little blue dressed snorkeler that I am.

Compared to his big sized body, his eye looks very small and filled with curiosity when looking at me before swimming back to his pod. I hear repetitive surge of cracking noise in the water, and understand it is the sound from the powerful tail-slaps the orcas make to numb their prey.

The Norwegian orcas use a specific method to efficiently hunt and feed on the herring. To trap the school of fish they have developed a special technique called “carousel feeding”, a teamwork which now is happening right in front of me. The orcas take advantages of the herrings defense mechanism which is to form a tight defensive group creating confusion in the predators mind. To trigger the herrings to group, the pod of orcas release bubbles and show their white underside of their bodies while circulating in sphere around the herrings, which frightens the fish closer and closer together, creating what is called a bait ball. When the herrings are sufficiently grouped, the whales swim closer and slap the edge of the ball with their tails (tail-slapping), which can numb or kill up to 10-15 herring with each successful slap. Thereafter, the orcas gently starts to eat the stunned herring one by one. As it sometimes happens, the carousel feeding migrates towards me and the orcas don’t seem to be bothered at all about my presence in the water. 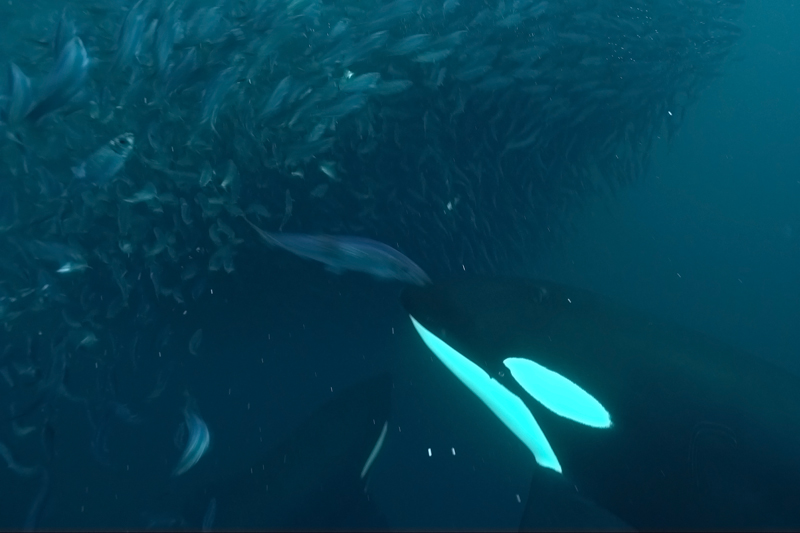 As I want to be as little influence as possible in their world I always minimize all movement forwards or backwards. So even when the bait ball goes in my direction I try to stay as discrete as possible just beneath the surface while filming the spectacular wildlife phenomena happening in front of my eyes.

Once again, I’m totally overwhelmed. I no longer think about the breathtaking mountain peaks, nor the magic of the northern lights. Here and now it’s only me and the great orcas enjoying their lunch in their cold but yet so amazing Arctic paradise.

What a great beginning of our stay here above the Polar circle. Who knows what other experiences this Arctic adventure will bring as this is just the start of a hopefully long season of the winter whales…

This concludes Birgitta’s series of  ”Northern Tales”. Missed a chapter? Visit Part 1 and Part 2 to catch up.

As a PADI AmbassaDiver, Birgitta will be keeping us up to date with her incredible adventures. For further reading and more pictures from Birgitta’s Arctic whale expedition, and her many other adventures, please visit her blog Film Photo Adventure and Facebook page Birgitta Mueck.