Birgitta Mueck, one of our PADI AmbassaDivers, shows us the thrills of dive exploration with this exclusive 3-part account of her latest cold water adventures. Sailing through the northern fjords of Sweden and Norway, Birgitta has searched for deep, rare species and pods of feeding orcas. Read on for her story…

Well above the Arctic circle during the darkest months of winter, deep in the fjords of Norway, there is something spectacular happening. It is in the county of Troms, at around 69 degrees north, where hundreds of orcas and humpback whales have started to gather during the cold and dark winter months. An extraordinary wildlife phenomena that started only 6 years ago and that will likely only last a limited time.

Northern Norway has always been a great spot for observing whales of various kinds all year round. But these enormous numbers of orcas and humpback whales that have started to appear annually in the fjords of Troms, has its peak between November and February. This is the time when great quantities of whales can be seen even far inside the fjords.

The reason behind this are the huge schools of herrings that come here. The whales follow the herrings, their main food source, in Norway. This overwhelming wildlife event, where such big numbers of both feeding orcas and feeding humpback whales can be seen next to another, is very rare.

In an effort to document this unique scenario, we are sailing our way north towards the long arctic winter with our expedition yacht, where we will attempt to film those impressive marine mammals from both above and beneath the surface.

Will we come in time and still find the majestic marine mammals that we are looking for? And what results will we be able to get when facing the very dark and cold conditions that Northern Norway provides during its long winter?

And so the journey starts

Our adventure started on an island off the Swedish west coast in early September. The name of this flourishing island is Orust, which is also the place where I grew up, and where our expedition yacht has her home port. From here the voyage continues north.

Our journey covers more than 1300 nautical miles, across the strait of Skagerrak in Sweden to the southern tip of Norway, then up north along its majestic coast – all while exploring some of the most impressive fjords of Scandinavia. We will be making different dive stops along this great Norwegian coast, before finally reaching the breathtaking fjords of Troms in Northern Norway.

The boat used for this expedition is our 45ft sailing boat “Eja af Slussen”. During the last 15 years, we have sailed over 40,000 nautical miles with her, to both warm and cold latitudes.

So many miles have been completed with only one mission in mind: to document the various kinds of aquatic life we find in our oceans. Through our films, which are mainly in cooperation with Swedish National Television, we aim to spread awareness, raise interest and develop knowledge for the marine inhabitants, and to show how threatened they are by the increasing human economic interest. This strong passion for the ocean has become a total lifestyle for me. When not at sea filming for our family-run company, Crystal Water Film Production, I work as a guide and PADI Divemaster on different locations around the world, from Antarctica in the south to the high Arctic in the north. Whether I am in warm tropical waters, or in the much more demanding cold latitudes, my fascination for the amazing life hiding beneath the surface never stops growing.

Our current sailing trip, here in Norway, brings me to extraordinary dive places where I yet again have the chance to experience amazing underwater encounters. Keep reading and travel along to the long and dark arctic winter and, like me, hopefully be amazed by the stunning life living in these cold waters!

We make our first dive stop in the south-western part of Norway. Our aim is to find the spiny dogfish (Squalus acanthias), a shark species that once was the most abundant in Scandinavian waters. However, due to over-fishing the population has decreased by at least 95% during the last three decades. Will we still be able to find them?

To try and find this shark, measuring up to 1.5 meters long, we will be diving along a 300 meter deep wall. The murky water surrounding us has a temperature of 13°C. The deeper we go, the darker it gets. At 40 meters, which is our maximum depth for this dive, we hardly see any light from above. The bright film lights shine on a huge variety of cold water anemones in various sizes covering the entire of the great, steep wall. It is such an amazing sight to see this hidden cold-water beauty. We all know about the colourful corals living in tropical seas, but not so many of us are aware of the great beauty found in the much colder and darker waters.

My attention suddenly shifts when a slow-moving shadow starts to appear on the wall. By watching the movements gradually coming closer, I soon understand that it is indeed the spiny dogfish we are looking for. This slender shark seems to be curious about our expedition and starts to circulate around us. 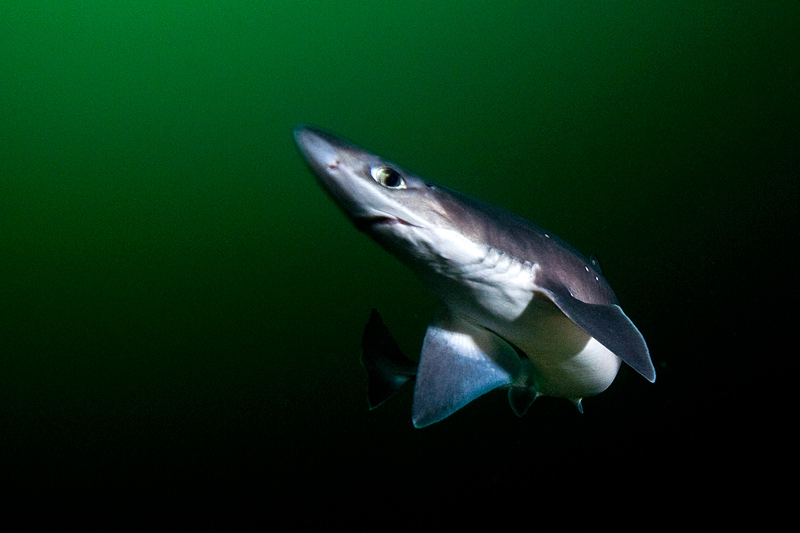 Sadly, this friendly little being is classified in the IUCN Red List of Threatened Species as critically endangered in the Northeast Atlantic. Since this shark species is a late maturing fish, where the females mature at an age of 18–21 years, giving birth to only a small number of living offspring (2-11) after a two-year gestation period, it is very hard for the population to recover. Like many other species of sharks, the spiny dogfish is considered particularly vulnerable to over-exploitation and is a species which would benefit from better and bigger  protected marine areas.

As most of us know, all species great or small play a crucial role in the balance of life on earth; none should be forgotten or be allowed to vanish from their natural ecosystem.