Protecting Clipperton Island – The Most Remote Atoll on the Planet 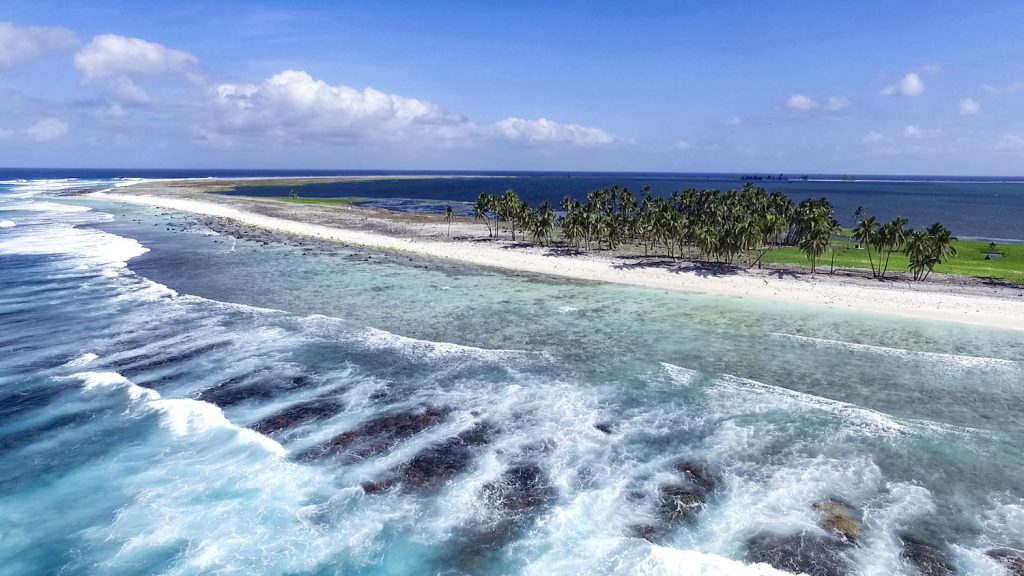 PADI AmbassaDiver Michel Labrecque and partner Julie Ouimet are on a mission to protect the most isolated atoll on the planet- Clipperton Island. Though this French overseas territory is now considered a marine protected area, it still faces threats from overfishing, with sharks and other large marine life nearly vanishing.

With their upcoming expedition, Labrecque and Ouimet will be documenting the human impact and evolution of the ecosystem on such a remote island, further researching the presence of sharks and other large pelagic life (since their research conducted in 2016), and identifying potential threats to better preserve this vital location. They have received special permission from French authorities to conduct the expedition, since only visitors are allowed on the island.

Their main goal is to continue and build on their mission from 2016, and ultimately demonstrate connectivity between Clipperton and other Easter Tropical Islands (Cocos, Galápagos, Malpelo, Coiba, Revillagigedo), and accordingly, the need to extend protection within the waters of Clipperton. They hope to collect sufficient data to justify the extension of the MPA to 100 nautical miles. Joint efforts are also underway to create an international corridor of protection covering national and international waters. This corridor would stretch down from the Revillagigedo to the islands of the Galápagos.

We caught up with PADI Master Instructor, TecRec Instructor, and Underwater Photojournalist, Michel Labrecque, to find out a little more about their journey to Clipperton Island. 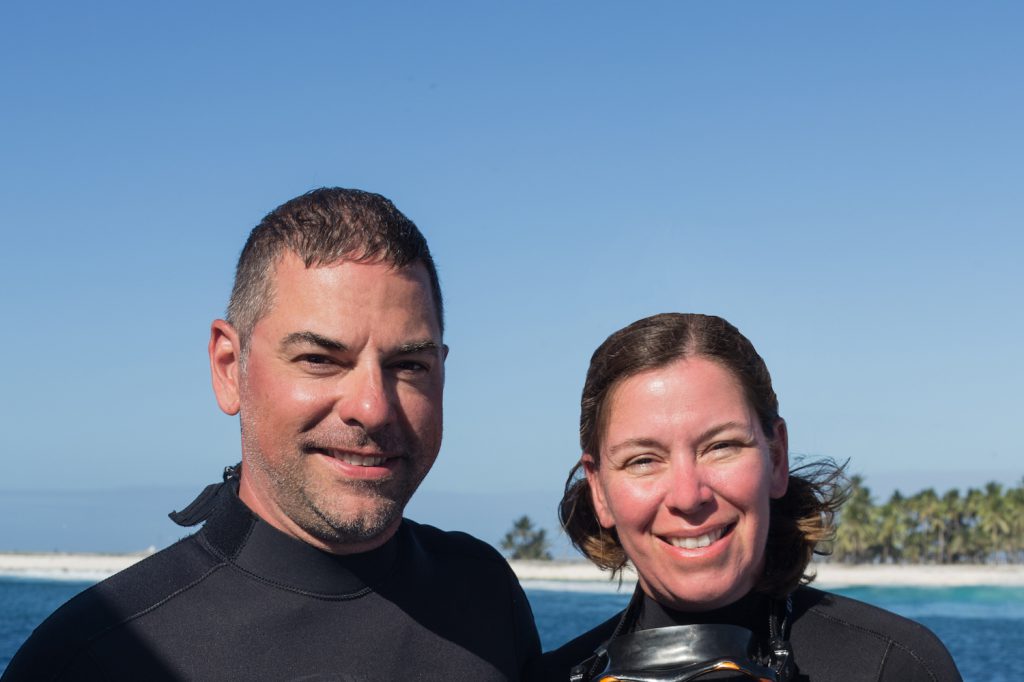 Describe the Clipperton Atoll and makes it such a unique location.

Clipperton is located in a zone known as the ETP (Eastern Tropical Pacific). It lies 870 miles (1400 km) off the west coast of Mexico, on the same latitude as northern Costa Rica. San Jose del Cabo, on the tip of Baja Peninsula, will be the departure point of our expedition. The atoll is only accessible by boat.

Aside from its location, which has earned it the title of most isolated atoll on the planet, Clipperton’s history is surprising and complex. Disputed by many countries since the 1800s, it was finally declared a French Territory in 1931. The island has been uninhabited since 1945 and visited only sporadically by groups of scientists and the occasional illegal visitor.

A special authorization, delivered by the French Government, is required to set foot on the island or to enter the territorial waters around the atoll, a 12-nautical-mile radius. Such authorizations are rarely granted and almost exclusively delivered to scientific missions, given the uniqueness of the atoll.

Clipperton has a harsh environment without drinkable water where wildlife fights for survival. Its remoteness also makes Clipperton a living laboratory for evolution and resiliency, a bit like the Galapagos. 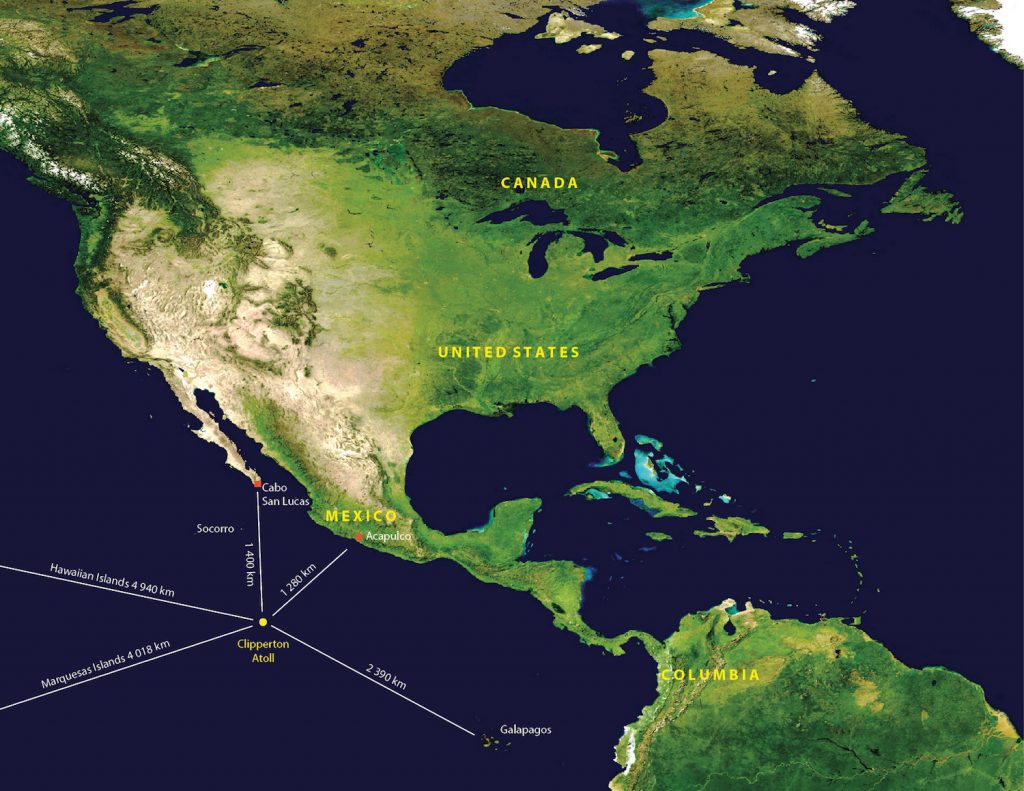 What is the driving force behind your research on marine debris?

Plastic pollution and marine debris are global problems that need to be addressed. The fact that the atoll has been uninhabited for more than 70 years, proves how widespread the problem has become. The modern trash we see can’t come from the island itself. Everyone needs to be educated about this phenomenon. By showing powerful images of a lost island that is littered with plastic debris, we hope to have an impact in changing our habits.

How will your expedition contribute to the preservation of marine life and draw awareness towards marine debris issues?

We already had an impact on the creation of a new MPA of 12 nautical miles and are returning in the hopes to gather sufficient data to extend it to 100 nautical miles, which was the initial recommendation. As for the marine debris, our recommendations were also to start to clean up the island and remove the live ammunition, which has recently been done.

What are you looking forward to most?

The creation of an international corridor of protection for sharks and other large pelagic animals and seeing how the atoll has evolved since our first mission expedition in early 2016. 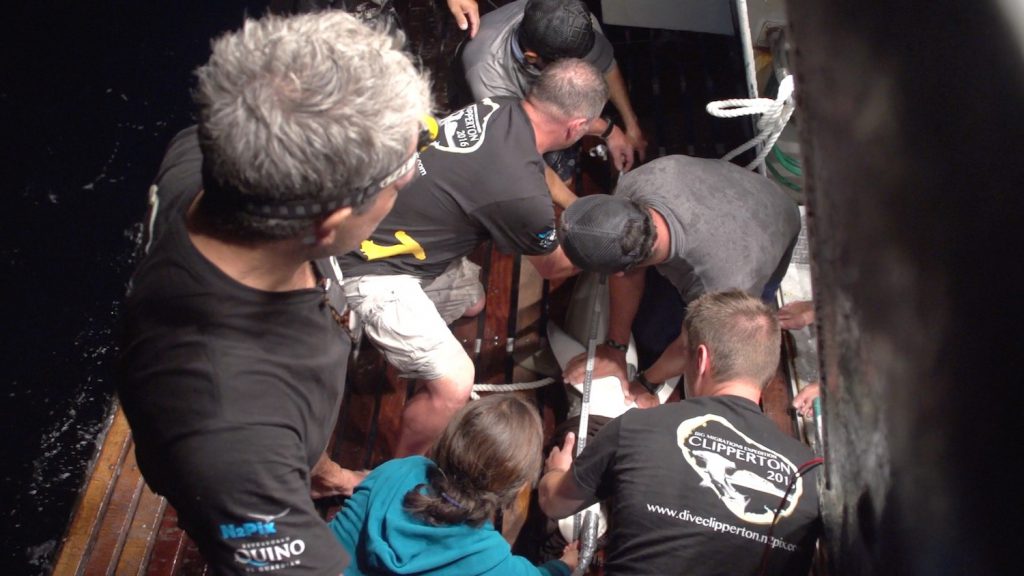 How can others get involved in this project and the fight against marine debris?

Since this is a citizen-science expedition, everyone can participate in this fight. By raising awareness, we are hoping that people will reduce their use of plastics. Some examples include stopping single use cups or bottles, drinking straws, plastic bags…these are all easy things to do. The less we produce, the less trash we are likely to find in our oceans.

In support of Labrecque and Ouime’s citizen-science expeditions to study and tag sharks, Swiss watch manufacturer, Oris, will be releasing a Clipperton Limited Edition watch. These watches are limited to 2000 pieces (MSRP $2000) and will be available in April 2018.

Invest in local conservation efforts by choosing one of these Top Destinations featuring Marine Sanctuaries and Hope Spots for your next dive trip!