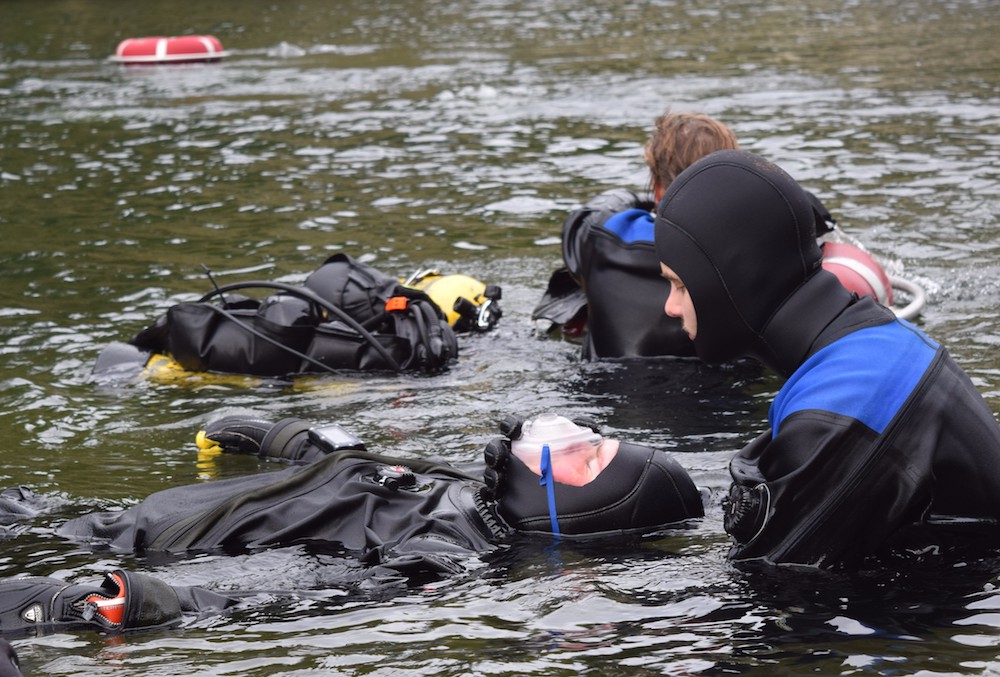 If you’re training to become a PADI® Divemaster, you took the Rescue Diver course. And, if you took the Rescue course, you probably remember how intense the in-water unresponsive diver rescue was. I had to do it at least three times before I had it down.

The Divemaster rescue scenario demonstration is really no different than the one you did in your Rescue class, only this time you need to be able to perform it flawlessly. After all, once you’re qualified and serving as a Divemaster, at some point in your career, you may be required to use it on a genuinely unresponsive diver. Even if that never happens, if you’re helping out with a Rescue class, you could be asked to demonstrate it.

Where some instructors will have their Divemaster candidates perform the scenario in a swimming pool, our instructor gave it a real-life flavor, or what I like to call “Rescue Scenario Pacific Northwest Style.” Hood on, 5mm gloves on, in the rain, in the wind, in open water, in restrictive dry suits.

Challenging as it might seem, you should be grateful for rigorous training like this. When the toughest training is your baseline, everything from there becomes more manageable.

Having verbally run through the scenario with my buddy, Joe, our instructor, and a qualified Divemaster, I set out to perform my first “rescue.”

It was a disaster.

While still onshore and giving orders to shore support to be on standby, I lost eye contact with the unresponsive diver (in this case, Joe, play-acting). Then, in my hurry to get geared up as fast as possible, I put my fins on before I was even ankle-deep in water. When I attempted my first stride, I fell flat on my arse.

I couldn’t believe it. What a rookie mistake. I never geared up like this!

With everyone laughing and me flushing red, appalled that I had not actually reviewed my PADI Rescue Diver Manual the night before, I kept going.

I waddled duck-like into the water and began the swim out, “Joe, are you okay?” I yelled. “Joe!” As I neared him I remembered to splash him, trying to get a response. When he did not respond I swam around the back of him and rapped him on the arm. Still no response. At that point I flipped him face up and inflated his BCD.

I forgot to listen for his breathing and call to shore support to contact 911 and let them know we had an unresponsive diver.

I took his regulator out of his mouth before I had the pocket mask ready.

And, when at last I had the mask on his face, I forgot to support his head, letting it slosh back to lie half-submerged in the cold water.

At this point, flustered as I was, I had tuned the rest of the world out. Gone was the instructor. Gone the onshore audience. Gone the Divemaster I was handing gear to. I simply did not have the cognitive capacity to let the outside world in. Total tunnel vision.

Once I’d given my two packing breaths and commenced rescue breathing, I began towing Joe to shore, counting aloud: one-thousand one, one-thousand two, one-thousand three, one-thousand four. My cadence was good, but as I later discovered, the fact that I did not have a firm grip on the pocket mask while giving breaths, and that I was not keeping Joe’s head supported, not so good.

As I towed him back in, I removed his equipment. I unplugged his drysuit hose, I undid the buckles on his BCD, and I pulled it off of him. I began doing the same to myself, only to realize at that point that I had left my weight belt on, and that I couldn’t undo my own buckles—two coin-shaped connectors opened via pressure. The thick gloves were making the task even harder. Once I had finally removed the BCD, I began removing my fins.

This is where things got even more interesting.

Remember that tunnel vision I mentioned a little earlier? Well, turns out that when you disconnect from the outside world and become hyper-focused on the task at hand—in this case administering rescue breaths and removing equipment—you can easily forget the basics, things like remembering to occasionally check you’re towing your buddy back in the right direction.

By the time I had removed my own fins and was preparing to drag Joe out of the lake, I realized I was in fact not back near the exit point, but further up the bank, blocked by a dense overhang of trees and bushes. I was able to stand but I was not able to get Joe out of the water.

This led to another round of good-natured laughter and a debriefing. We reviewed what I had done right, and where I needed improvement. Then, Joe and I switched roles. I became the unresponsive diver, and he the rescuer.

Being on the other side of the fence was helpful too. I felt what it was like to not have my head supported, and as I had nothing better to do than lie there and be “rescued,” I concentrated on Joe’s handling of the situation, noting how I might improve my own rescue when it was my turn again.

Playing the victim it became immediately obvious to me how important it was to both have my head supported and to have a good seal on the pocket mask once it was applied. Like me, Joe didn’t get this right the first time around, and water sloshed into my mouth as he towed me in.

The second time I performed the rescue, things went a little more smoothly. My only errors were in once again not supporting Joe’s head the entire time, and once I got to shore, making the mistake of not first wrapping my arms under Joe’s arms to haul him out. This is an essential step if you’re of a smaller build than the person you’re rescuing. I also forgot to listen for breathing once I’d given two more packing breaths.

Each time Joe and I switched roles, we learned a little more. Don’t rush. Focus on cadence and giving rescue breaths above all else, focus on the victim’s equipment first.

At last, shivering and all but exhausted, we each performed a perfect rescue and Mike, our instructor, high-fived us. His usual school-boy smile plastered on his face, he asked if we’d noticed the sirens. A traffic accident had been reported further up the road, and as I was towing Joe back in, removing his equipment, police vehicles had raced across the bridge over the lake, sirens blaring, creating an eerily realistic backdrop. I was surprised to find that I had tuned them out, almost entirely. It was a good lesson for the future. As intense as the situation might be, try to maintain awareness of other factors, factors that could drastically affect the success of your mission.

As with every aspect of my Divemaster training, performing the Rescue scenario over and over was an important lesson in stress management, task-loading, and the ability to handle both my own gear and another diver’s gear.

If you’re considering whether or not you should take the Divemaster course, my advice to you is to do it, if for no other reason than to heighten your awareness and improve your self-rescue abilities. And, if the course looks like it’s going to take a long time, all the better—you’ll get that much more practice!

Learn more about becoming a PADI Divemaster in the video below or check out these reasons to start the course.