There’s nothing quite like a mother’s love, and when it comes to ocean animals, marine mammal moms are some of the most loving moms in the underwater world. For marine mammals, the relationship between mother and child is one of the most vital and important factors of survival. Just like humans, marine mammals are warm-blooded animals that breathe air through their lungs, give birth to live young, and nurse their babies with milk produced by the mother.

Found in almost every marine ecosystem around the globe, marine mammals are a diverse group of animals with unique physical characteristics that allow them to thrive in a myriad of different ocean conditions. These underwater mothers face challenges that aren’t present on land, and getting their young successfully though the early years of life is truly an incredible accomplishment. Many marine mammal moms migrate long distances seasonally, dive to great depths for food, and are faced with human-caused dangers like accidental capture and entanglement in fishing gear, ship strikes, underwater noise, and pollution. While many protections for marine mammals exist globally, including the Marine Mammal Protection Act in the United States, many marine mammal species are still considered endangered.

Marine mammal moms and babies range in size from small sea lion pups to the largest animal that has ever lived – the blue whale. Many of these marine mammals adhere to complex social systems – including the dynamic relationship and bond formed between mom and baby. Read on for some of the most extraordinary examples of motherhood in our oceans. And Happy Mother’s Day to all the scuba diving, freediving, and ocean-loving moms out there!

The bond between mother and baby in the dolphin world is truly remarkable. Baby dolphins, also known as calves, are born tail first so that they are perfectly in position to take their first breath at the surface – almost immediately after birth. With mom’s help, they are already able to swim on their own and breathe for themselves just minutes after being born.

For the next couple years (depending on the species), mother dolphins and their calves are more or less inseparable due to the fact that calves are totally dependent on nursing their mother’s milk. Also during this time, the mother will typically swim directly alongside her baby so that it can be swept along in her wake – increasing the distance which the young dolphin can swim before tiring out. Mother dolphins also provide protection for their young, acting as a full-time body guard, since dolphin calves can be targeted by predators due to their small size and lack of experience. Even once the calf has stopped nursing, mom and baby will live together – highly connected – in the same pod for several more years, until the calf reaches puberty.

Want to dive with dolphins? Read more here: ‘The Best Places to Dive with Dolphins’. 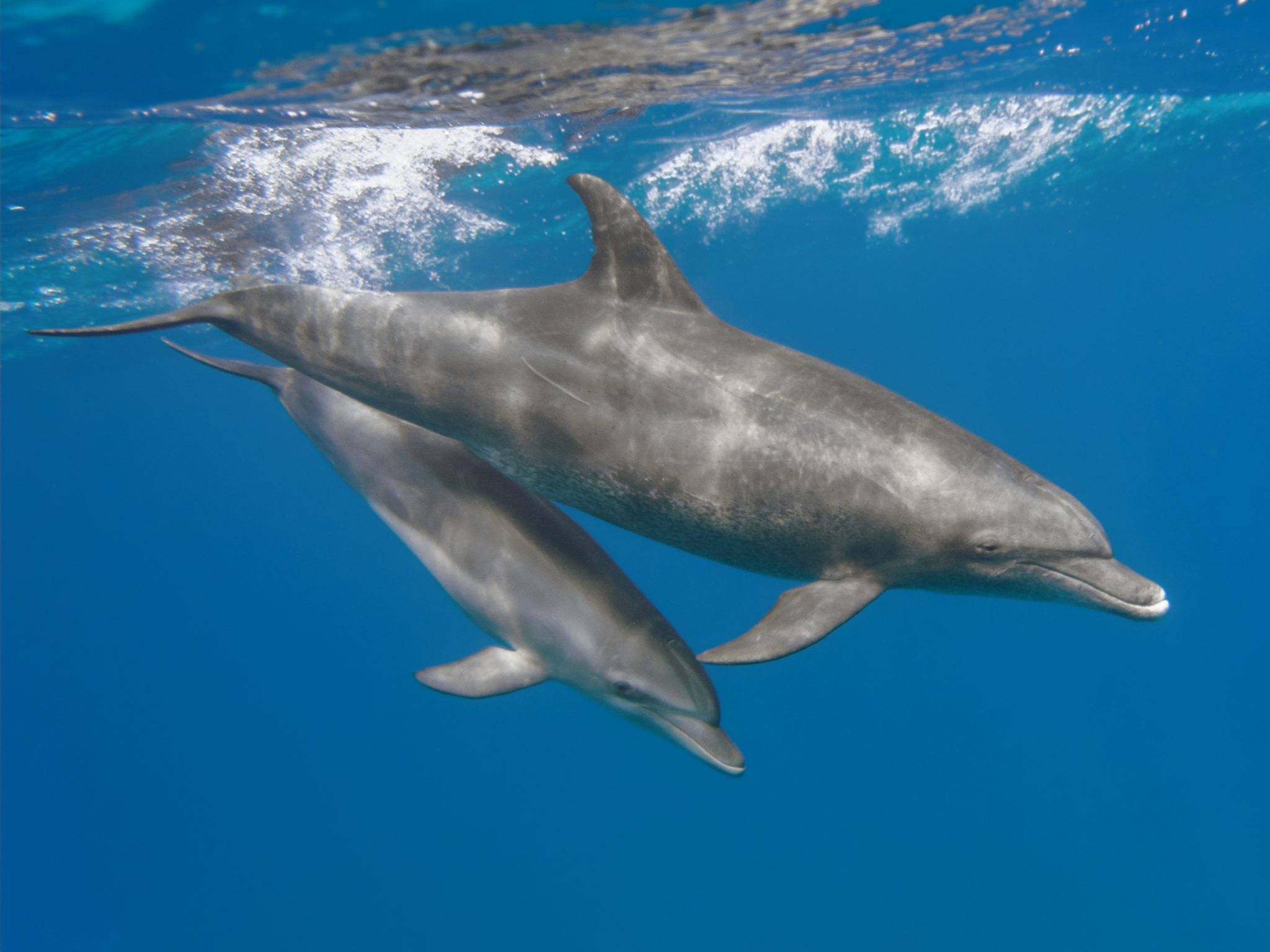 By far, the strongest social bond created by manatees is the relationship between mother and baby. A mother manatee will carry her baby for about 12 months before giving birth. On average, manatee moms give birth to one baby every two to five years. While some details of the manatee birthing process still remain unclear, observations in the wild as well as in captivity have shown that manatee babies, also known as calves, can be born either head or tail first. Immediately after birth, the calf must get to the surface to breathe. This is sometimes achieved on their own, and sometimes with the assistance of mom. Within minutes after birth, newborn manatee calves are capable of vocalizing – an important part of the mother-calf bonding process.

Manatee calves begin to nurse on mother’s milk within a few hours after birth from teats located behind mom’s flippers. Mothers nurse their young for one to two years, so a calf remains dependent on its mother during that time, even though calves do begin to supplement their diet with aquatic plants within the first year of life. Mom also teaches her calf travel routes, locations for food, rest areas, and warm water refuges. While adult manatees typically swim in single file, a mother and her calf almost always travel parallel to one another. This closeness helps mom and baby communicate most effectively as well as helps baby swim more efficiently. Manatee moms also protect their calves by putting themselves between their baby and any perceived threat. If enough danger is perceived, mom and baby will flee – producing a duet, with a call and response type vocalization.

Want to get in the water with manatees? Read more about ‘Diving in Florida’ via PADI Travel. 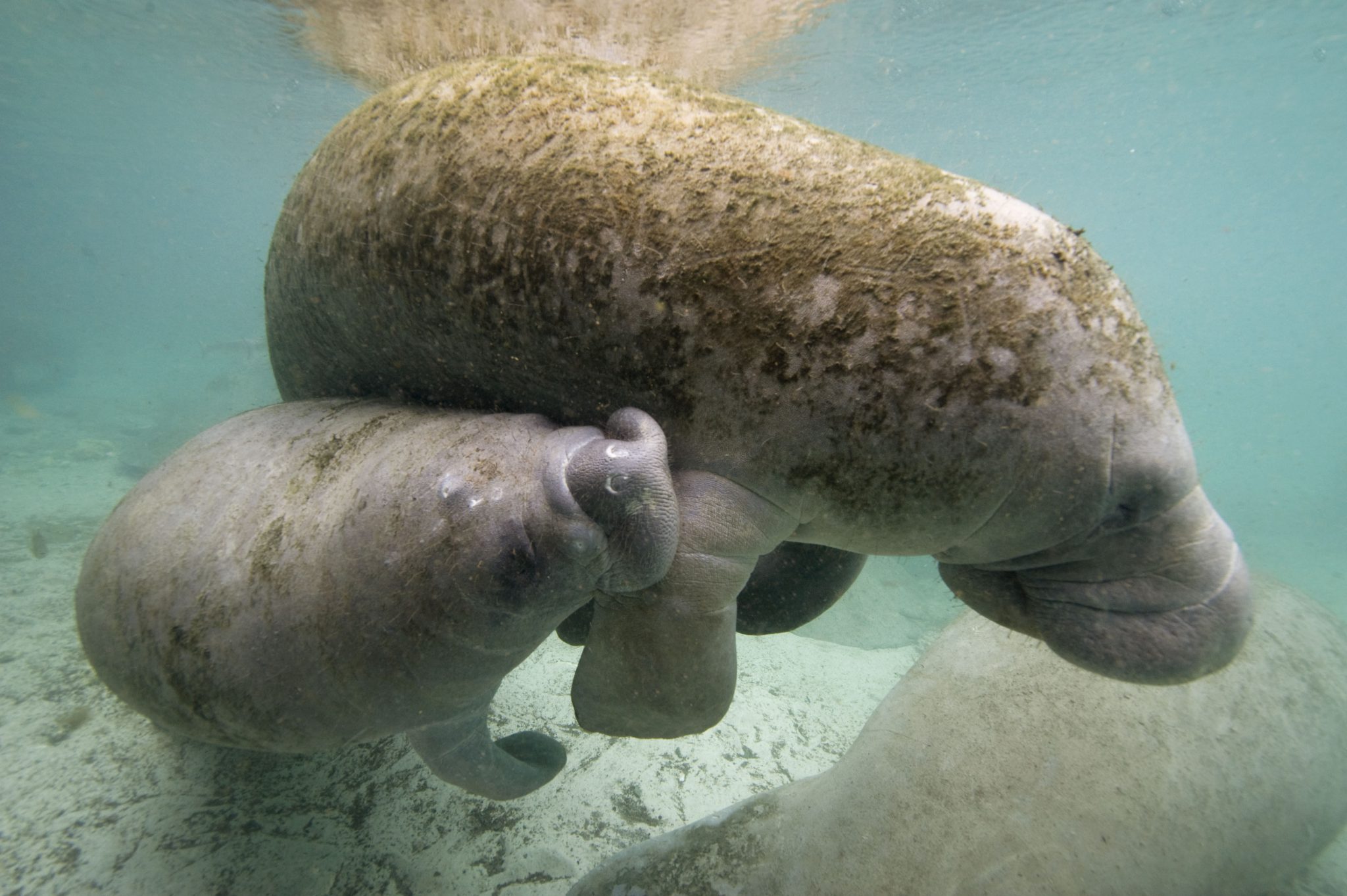 No matter the species of whale, these large and in charge marine mammal moms take incredible care of their young. The gestation period of most whale species is between 10 to 18 months. On average, whale moms will give birth to a new baby every one to six years. Baby whales, also called calves, are most often born tail first in order to successfully get their first breath at the surface immediately after birth. Newborn calves are usually one-quarter to one-third the length of their mother – making for some pretty huge babies!

Depending on the species, for the first several months or years after the baby whale is born, it nurses on nutritious milk produced by its mother. Whale calves grow very rapidly thanks to the extremely high proportion of fat and proteins contained in whale milk. During this time, whale moms form a close bond with their calves, teaching them survival and social skills, as well as lots of playing and singing.

Want to dive with whales? Read more here: ‘The Mystery and Magic of Whale Songs’. 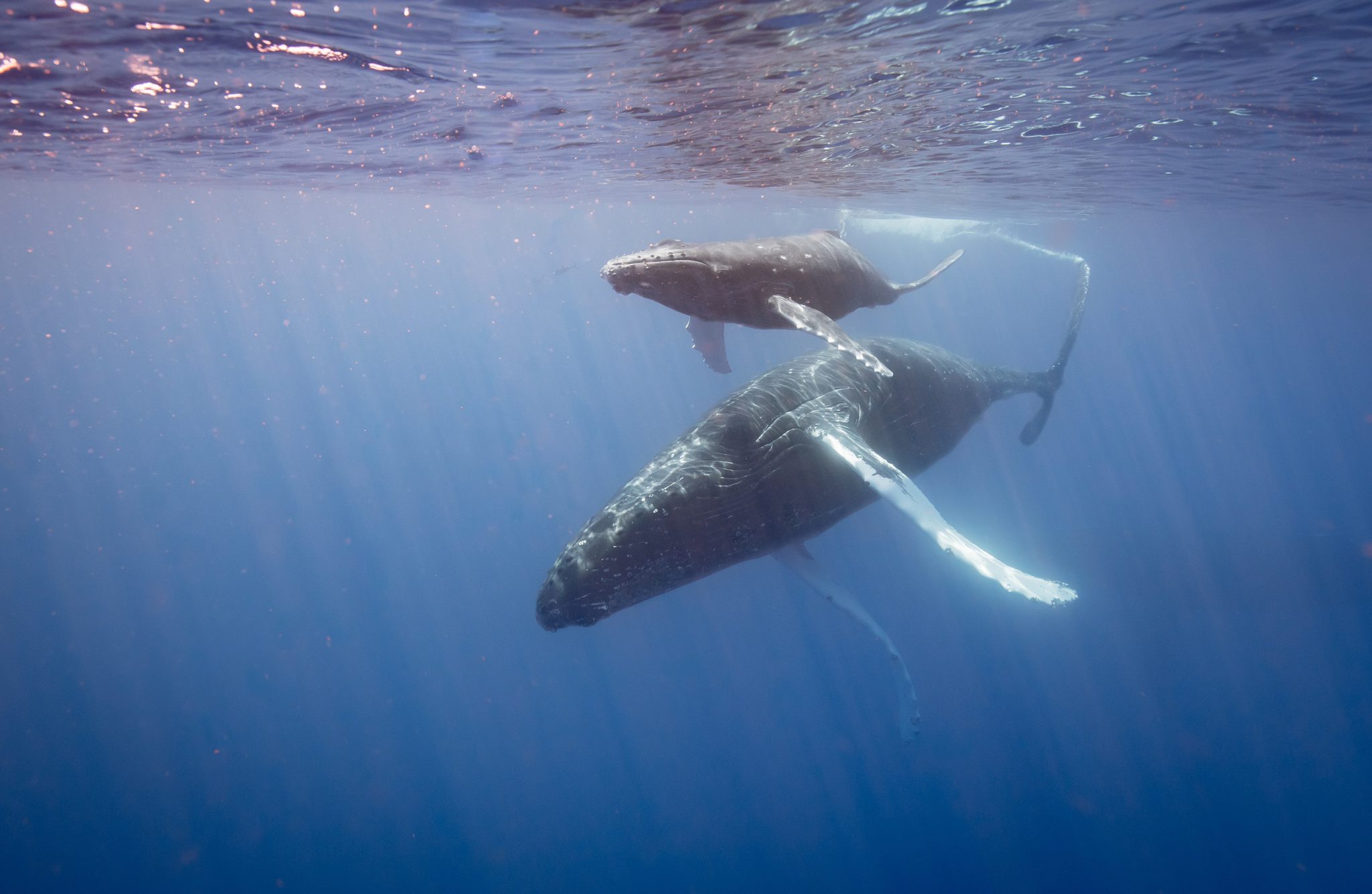 Sea lion moms are intelligent, resourceful, and playful marine mammals that pass these traits down to their babies. After a pregnancy that can last from 8 to 11 months, a sea lion mom will give birth to a fully developed sea lion baby, also known as a pup. Female sea lions usually give birth to a single pup per year. Unlike the other marine mammals mentioned above, sea lion pups are actually born on land, rather than in the water. Shortly after being born, a sea lion pup can walk around on its own, but won’t be taught to swim by their mom until they are a couple of months old. Mothers are very attentive to their pups during the first few days of life, nuzzling them and picking them up by the scruff of the neck.

Sea lion pups nurse on their mother’s nutritious high-fat milk for six months to a year, helping to build up a thick layer of blubber to keep them warm. While the pups are still on land, sea lion moms must go to sea to feed in order to provide milk to their young. Feeding trips generally last less than 24 hours and occur every 1-3 days. Vocalization is an integral part of the mother-baby bond of sea lions. Pups can vocalize shortly after birth, making tiny barking sounds. Amazingly, both mom and pup can recognize each other’s unique bark even in a crowd of hundreds of other sea lions. The ability to know when their pup is in distress, helps sea lion moms provide safety for their young. After weaning, mother’s teach their young to hunt for fish, and the pair will remain closely together for an additional one to three years.

Want to dive with sea lions? Learn more about them before you go: ‘Seven Facts About Sea Lions’. 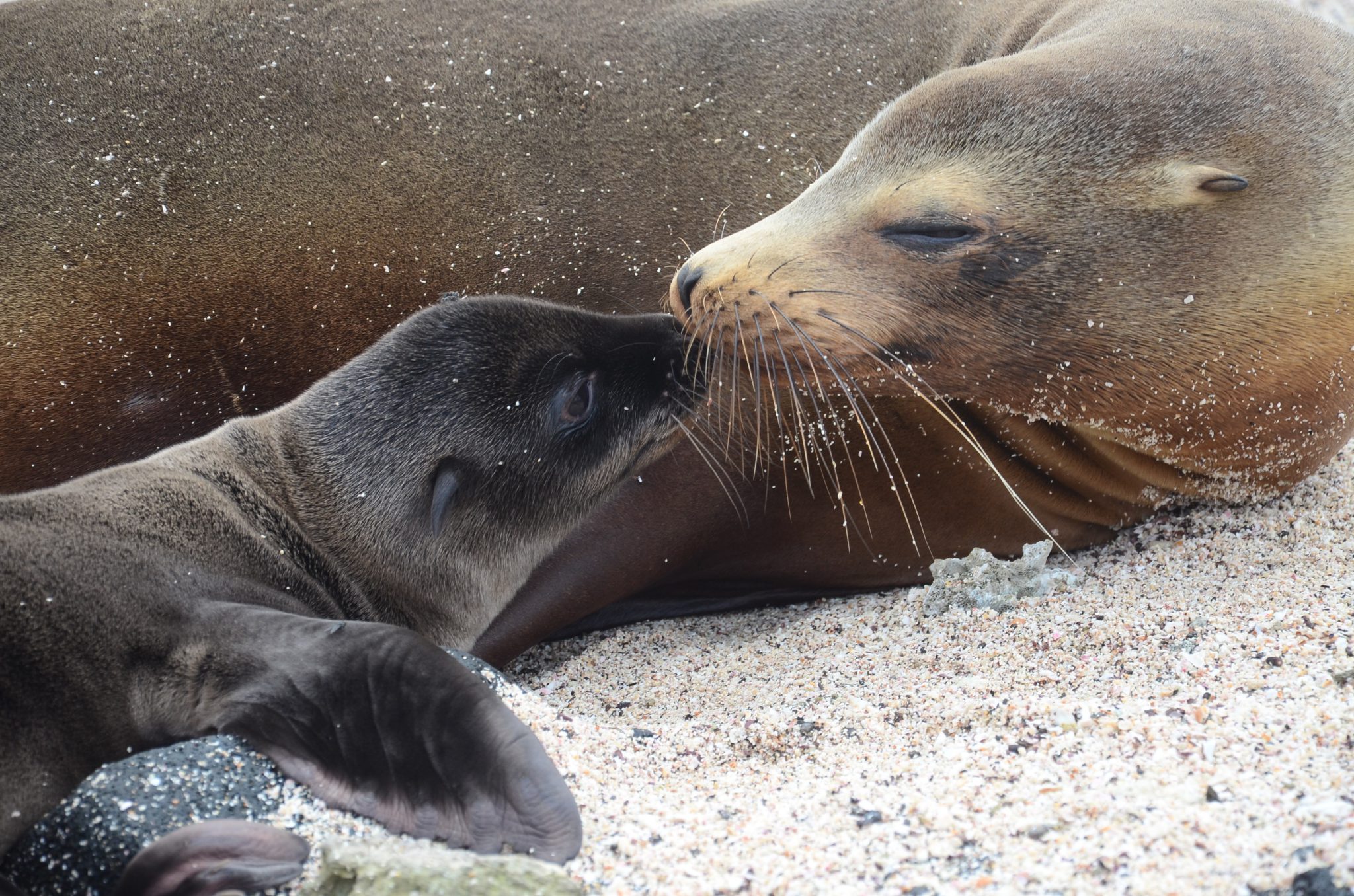 Marine mammals are some of the most adored ocean animals in the world. And when it comes to the relationship between mom and baby – marine mammals shine even brighter. From dolphins and manatees, to whales and sea lions – the love that these marine mammal moms show to their young is truly heart-warming.

Thank you to all the moms out there, above and below the surface, that love and care for their children. Happy Mother’s Day!

The 10 Best Places to Swim and Dive with Dolphins

Timor-Leste: The Place to Be to Encounter Dolphins