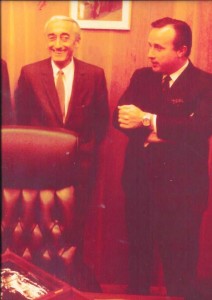 Divers owe a lot to Jacques Cousteau. Often nicknamed “the father of scuba diving,” Cousteau played a huge role in the development of modern scuba diving. He also raised awareness of various marine life and opened eyes to the problems that endanger it. Here are just three of the ways Cousteau impacted scuba diving and made it what you love today:

Thanks to Jacques Cousteau and his partner Emilie Gagnan, divers were finally able to explore parts of the ocean they had never seen before. In 1942, Cousteau and Gagnan co-invented a demand valve system that would supply divers with compressed air when they breathed. This modern demand regulator was named Aqua-Lung and its invention eventually opened the door to diving for anyone who was interested.

2. Shared the underwater world with others through documentaries

Using a pressure-resistant, waterproof camera, Cousteau was able to film his explorations so that the whole world could get a glimpse into the ocean. He created several Oscar-winning films, one of them named The Silent World, and even produced a television series named The Undersea World of Jacques Cousteau. Cousteau’s underwater films showed people a miraculous new world. Without them, many people may have never developed an interest in scuba diving.

During his time filming documentaries, Cousteau discovered what was truly happening in many of our waters and found that we were endangering marine life. From then on, Cousteau became active in defending ocean life saying, “People protect what they love.” He then went on to help restrict commercial whaling and stopped the French government from dumping nuclear waste into the Mediterranean Sea.

Even after his death, The Cousteau Society, which he founded in 1973, continues to protect the ocean environment, helping keep the water clean and marine life safe.

Jacques Cousteau once stated, “The sea, once it casts its spell, holds one in its net of wonder forever.” Many divers today may never have learned the true meaning of those words if it wasn’t for Cousteau making it all possible.

Diving in the Fin Steps of Cousteau