Cuttlefish are pretty strange creatures. As a diver, you’re used to seeing unusual animals underwater, but cuttlefish have been around for over 500 million years and are unlike any other animal in the ocean.

Cuttlefish are found in oceans all over the world, usually in shallow reefs and marine channels. As they are globally distributed, cuttlefish are not rare to see and you might spot one on your next trip. Before you pack up and leave, however, let’s learn some of the more unusual facts about these interesting animals and what you can expect from your first sighting.

1. A cuttlefish isn’t actually a fish. It is a cephalopod mollusca, which is the same class as the octopus and squid.

2. They keep buoyancy better than scuba divers thanks to their internal gas-filled bone, named the cuttlebone.

3. Cuttlefish are thought to be more intelligent than any other invertebrate.

4. To move quickly, the cuttlefish uses jet propulsion by shooting water from its siphon.

5. Despite being colour-blind, the cuttlefish can change colours and textures to blend in with its surroundings and hide from predators.

6.  The advanced eye of the cuttlefish has a pupil shaped like a “W.” This allows them to see polarized light, which cuttlefish use to communicate.

7. When threatened, cuttlefish will squirt a brown-coloured ink. The ink is used to confuse predators and distract them while the cuttlefish make their escape.

8. Cuttlefish have a short life span and often live only one to two years.

9. These strange creatures have two hidden feeding tentacles they use to capture their prey.

10. The cuttlefish has a small beak in the middle of its tentacles, which is used to break open the shells of its food, such as mollusks and crabs.

Want to learn more? Sign up for ScubaEarth and login to try the new Critter Finder feature. 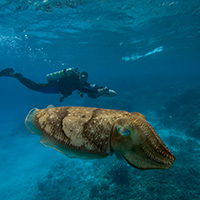 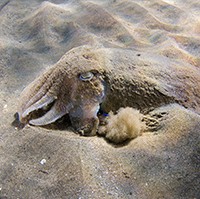 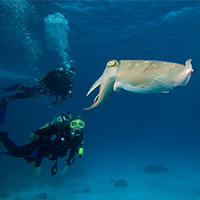