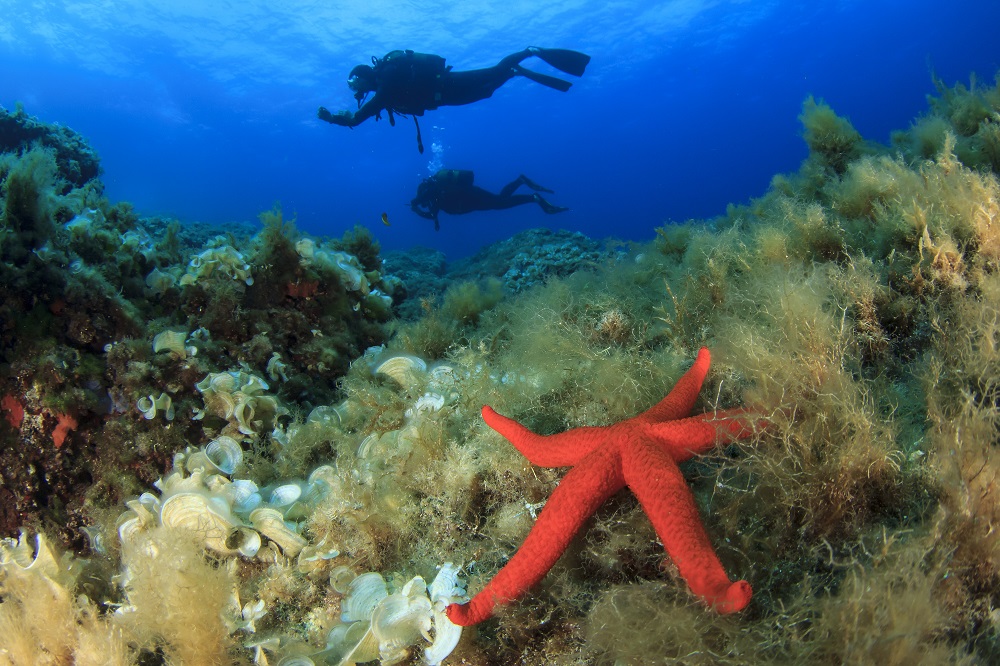 With regular appearances from the seabed to the big screen’s cartoons, the starfish is a widely-known and well-loved sea creature, especially with children. However, it’s not actually a fish and for that reason, marine biologists prefer to call the invertebrate a sea star.

Most people know that sea stars typically have 5 (or multiples of 5) identical arms. These arms extend from a center body in a star shaped arrangement, and they travel across the seabed slowly with suction-cup “tube feet.”

Here are seven more fun facts on sea stars you can use to impress your kids/friends/fellow divers the next time you spot one:

#1 – Sea stars can reproduce sexually and asexually. During ideal conditions, sea stars group together to spawn, and have sexual organs, or gonads, in each arm. Males and females release thousands of sperm and eggs into the water and hope they meet for fertilization. Asexual reproduction usually occurs as a result of dismemberment.

#2 – Sea stars have unusual stomachs. It pushes its stomach through its mouth, digesting food while the stomach is outside its body.

#3 – Sea stars don’t have a brain or blood. Instead of blood, they have a seawater vascular system. In the place of a brain, the sea star has an intricate nervous system.

#4 – Sea stars can change gender. Depending on availability of food and the water temperature, a sea star can change its gender to whichever one is best suited for its environment.

#5 – Sea stars can regenerate body parts. A new sea star can regenerate if part of it becomes severed. Regeneration is a less than ideal way to reproduce because it doesn’t allow for DNA diversification.

#6 – The female sea star can produce millions of eggs. Other animals eat most of the eggs, meaning only a few will ever become adults.

#7 – They have an eyespot at the end of each arm. Their vision is primitive, and they can only sense movement, light and dark.

For more facts on sea stars and to identify the different species you’ve spotted on your dives, check out the ScubaEarth Critter Finder.