In the lead-up to PADI Women’s Dive Day, coming up on 16 July, 2016, we’re featuring the world’s most interesting and accomplished women in our “Women in Diving” blog series. This time, we caught up with Susan R. Eaton, scientist, explorer, journalist, conservationist and ‘extreme’ snorkeler.

Ten years ago, after a 32-year career in diving, Susan suffered a scuba diving trauma that landed her in a hyperbaric chamber for three days, ending her scuba diving career. Today, Susan explores the ocean in the snorkel zone, the land-sea-ice-air interface where snorkelers interact with large marine mammals. Susan is also the founder and leader of the Sedna Epic Expedition, a team of women divers, scientists, explorers, movie-makers, photographers, artists and educators recently announced as PADI AmbassaDiversTM. Team Sedna is currently preparing for an epic 3,000-kilometer snorkel relay across Canada’s Northwest Passage in the summers of 2017 and 2018 to bring global attention to the disappearing sea ice in the Arctic.

Read on to find out more about Susan, Team Sedna and how they plan to dive the five Great Lakes in 24 hours (a world’s first) for PADI Women’s Dive Day 2016! 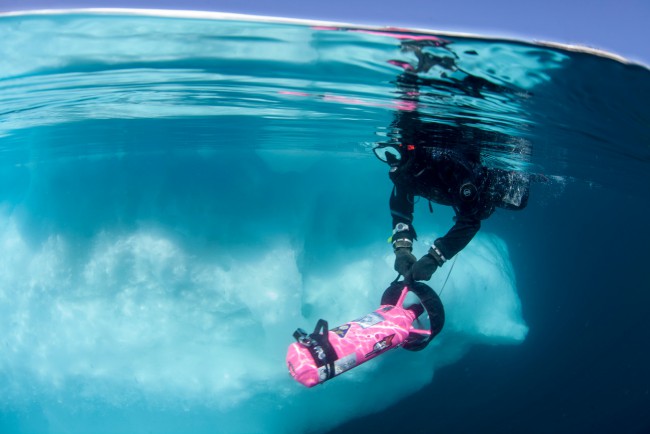 You were an early achiever of the PADI Open Water Diver certification at a time when there were few women divers. How did that come about? What inspired you?

I obtained my PADI Open Water Diver certification in 1975 when I was 16. I was one of two women in my class. Completing that certification took a great deal of dedication on everybody’s part because our checkout dive took place over two days in Halifax Harbor… in Nova Scotia, Canada… in February…during a two-day blizzard!

As for inspiration, my dad was a recreational diver in the 1950s and 1960s, and my mom was a marine biologist – who could barely snorkel! She was a marine mammal expert, specializing in whales and seals.

I was also inspired by other female ocean scientists of the day, including deep ocean explorer Dr. Sylvia Earle and ichthyologist / shark behaviorist Dr. Eugenia Clark, who took up scuba diving in pursuit of her research. I thought, “If Jacques Cousteau is going to hire me, I need to be a diver!” I wanted to be ready!

Did you have a favorite type of diving? Such as ice diving, cave diving, etc.?

I really enjoyed all types of diving and leading dive expeditions. In fact, I co-led a dive expedition to Cocos Island back in the mid-1980s, before anyone ever heard of it! I was never a cave diver; I like looking up and seeing the water’s surface. I like deep diving too – I don’t need to see the bottom! Wreck diving was an early favorite since I grew up in Nova Scotia, one of Canada’s Maritime Provinces. Its rocky coastline is littered with shipwrecks, and diving there involves dangerous currents and cold water. Nova Scotia is also home to sunken ships dating from the 1600s all the way up through World War II. My favorite wrecks were the wooden ships from the 1800s to 1900s, although there isn’t much left of them. I would love to dive a German U-boat but I’ve never done it!

My hands-down favorite ocean activity has always been interacting with big animals. However, in most jurisdictions, it’s illegal to dive with marine mammals; instead, you snorkel with them in the snorkel zone. For me, the snorkel zone because is the most dynamic part of the ocean because it’s the place where all the air-breathing animals come to the surface.

And now, the snorkel zone is your home. Will you please tell us how that came to pass?

Ten years ago, I experienced a diving trauma in Belize, and I spent the better part of three days in a hyperbaric chamber… I emerged from the chamber as a non-diver.

So, after 32 years of diving, I assumed that my up-close-and-personal relationship with the ocean was over. Initially, I was quite depressed. Then, I discovered that people were snorkeling with belugas in Churchill, Manitoba. Intrigued, I traveled to Hudson Bay, to report on snorkeling with belugas for the Calgary Herald. Then, I heard about people snorkeling the rivers of Vancouver Island with hundreds of thousands of migrating salmon. I visited Campbell River, the “salmon capital of the world,” and ran the river with up to a half a million salmon. The salmon are fighting their way upstream as I was gliding downstream. When the salmon see your black wetsuit (which looks a lot like a seal), they just part around you. Next, I volunteered with the Haida Nation Fisheries program, counting and netting salmon, and snorkeling the rivers of Haida Gwaii which lies off the northern coast of British Columbia. Then, I set off to snorkel with narwhals off the northern tip of Baffin Island. Unfortunately, my fellow explorers and I became stranded when the ice we were camped on broke away from the island. After traveling 19 kilometers on an ice island, we were some 36 hours later rescued by the Canadian military!

In short, I’m happy exploring my new home in the snorkel zone, the dynamic land-sea-ice-air interface where the exhalations of snorkelers co-mingle with those of narwhals, belugas, leopard seals and humpbacks.

In 2015, you were named one of Canada’s top 100 modern-day explorers by the Royal Canadian Geographical Society. How did you become an “explorer”?

When I first got involved in ‘extreme’ snorkeling, I googled ‘Antarctica and snorkeling’ and discovered the Ocean Geographic Society’s Elysium Epic Expedition comprised of scientists, movie makers and photographers were going to the Bottom of the World to study ocean change. I joined the science team as the ship’s geophysicist – which was not as easy as it sounds. When I discovered the expedition, the vessel was departing in just three short months. I got in touch with the contact person in Amsterdam and told her, “I need to be on this trip.” She said it was by invitation only, and who are you, anyway? I told her, “I’m an ‘extreme’ snorkeler.” I also told her that 100 years ago, Ernest Shackleton’s scientific team had been led by a geologist and that there had also been a geophysicist in the team – wouldn’t it be great if, 100 years later, the geoscientist was a woman? Well, I made it onto the Elysium Epic team. Since 2010, I’ve participated in three Antarctic expeditions and three expeditions to the Arctic.

Now, you are devoting a great deal of time to your homegrown project, the Sedna Epic Expedition? What was the inspiration for Sedna?

For three years, I researched and planned how a team of divers and snorkelers would go about snorkeling the Northwest Passage. In September 2013, I launched the all-female Sedna Epic Expedition at the Canadian Chapter of the Explorers Club. I named the expedition after Sedna, the Inuit goddess of the ocean and the mother of all marine mammals. The Sedna Epic Expedition’s goal is to bring attention to disappearing sea ice and to deliver ocean educational outreach to Inuit and Inuvialuit communities situated along the Northwest Passage. Team Sedna’s sea women will serve as role models for indigenous girls and young women in the Arctic, inspiring them to think big, and to follow their dreams.

During the summers of 2017 and 2018, Team Sedna will launch a 3,000-kilometer snorkel relay across the Northwest Passage. Team Sedna is comprised of women from around the world – including indigenous women – and includes snorkelers, divers, scientists, moviemakers, photographers, educators, and artists. The mother ship will become Team Sedna’s TV station /floating classroom. Team Sedna’s ocean education outreach program also includes underwater robots equipped with cameras that kids can fly from the piers. During the summer of 2016, Team Sedna will travel to Iqaluit, Nunavut, a small Inuit community situated on Baffin Island. The sea women will run their innovative ocean outreach program, using aquariums and robots. And, assisted by two PADI Divemasters, we’ll mentor 12 indigenous girls, leading them on snorkel safaris and teaching them about the oceans around them. We call the program “bringing the ocean to sea level”.

Will Team Sedna participate in Women’s Dive Day this year?

Yes! We’re planning to dive all five Great Lakes in 24 hours, which is a world’s first! We’re partnering with PADI Dive Center Great Lakes Divers in Alpena, Michigan, and dive shop owner Stephanie Gandulla, who is also a Maritime Archeologist and Media and Outreach Coordinator at Thunder Bay National Marine Sanctuary for NOAA. Stephanie is also a member of Team Sedna. According to Stephanie, “In addition to Team Sedna’s sea women, I’m sure there’ll be plenty of space for PADI divers to participate. In fact, we already have four signed up – and they run the gamut of dive experience from newly-minted PADI Open Water Divers through experts.” To sign up for the Sedna event, visit padi.com/women-dive.