An Ethological Perspective of Australia’s Response to Shark Attacks

Ocean Attack: An ethological perspective on society’s methods of responding to shark attacks in Australia.

In response to recent shark attacks in Australia, I am writing to provide a professional perspective on why baiting and killing sharks on drum-lines is neither beneficial nor productive to ocean conservation or ourselves. Through my career as a veterinarian over the past eleven years, science and medicine have proved the importance of healthy ecosystem relationships towards the health of individuals involved. Being a scuba diving instructor has allowed for constant observation of biological communities in the ocean and their connection to life on earth. When we discuss sharks in relation to attacks on humans, it is important to remember that humans have not evolved in the ocean, nor have sharks ever been reliant on humans for food. As sentient beings, humans naturally react emotionally seeking revenge and solutions in response to traumatic events that threaten us. But this attitude is perpetuating a realistic plight against the ocean, and specifically sharks; at the expense of evolution and science. With shark numbers rapidly decreasing, it is time to ask ourselves, what will our future look like if we selectively remove the ocean’s apex predators?

Sharks have existed in our oceans for over 400 million years. As apex predators they dominate the food chain and adapt to its availability. Scavengers of the sea, sharks change their dietary preferences in response to food availability after populations of one food source become scarce. They have unique anatomical adaptations such as electrochemical receptors called Ampullae of Lorenzini around their snout, which detect vibrations in the water associated with dying fish, aiding their ability to hunt. This becomes important when we look at the olfactory and sensory cues that sharks use when selecting prey. Sharks balance marine ecosystems by managing species populations and removing sick individuals from healthy populations.

Sharks are curious. On a recent cage-diving expedition, my immediate response to watching Great White Sharks hunt was to compare them to the domestic companion carnivore many of us keep as pets; the cat. Like a mischievous cat hunting a mouse, the sharks circled and stalked burley (tuna blood and guts) on the surface, using speed and agility to engulf it. Other cage-diving operators which didn’t have a licence to use burley instead played music, including ACDC’s classic rock, using sound wave frequencies to attract them. Understanding the biological adaptations of any species further enables us to predict their behaviour. We know that Great White Sharks eat seals. Having swam with Australian Sea Lions myself, it became obvious that these playful souls enjoy the thrill of rolling through the water when feeding. It shouldn’t be surprising then that when humans choose to play in the ocean and dangle from surfboards, their splashes and movements might send inviting cues, similar to what nature intended. Coupled with inherent curiosity, we have learned to predict this as natural shark behaviour.

So, why are humans so afraid of sharks? Contrary to popular belief, the Australian Shark Attack File in 2015 revealed that shark-attack injuries and fatalities total very low in the larger scheme of injuries/deaths related to other water-related activities. In fact, more people die of falling coconuts each year than shark attacks. Yet for many, simply saying the word “shark” evokes a reaction of fear. As a scuba diving instructor, when asked what prevents participants from learning to dive, many mention that same word, sharks. Unfortunately, societal views and the media, as was conveyed through the 1975 Hollywood film JAWS, portray Great White Sharks (in particular) as ravenous man-eating beasts, instead of the apex regulator of the ocean’s food chain that they are.

I argue that rather us fear sharks, sharks should fear us. With few natural predators, threats to all sharks include human profit-driven industries including shark finning (for shark fin soup and natural remedies), shark meat (in Australia labelled as flake), coastal development (claiming shark nurseries), pollution, and poor fisheries management practices, which render sharks as by-catch. And it doesn’t stop there. Political action in response to reported shark sightings now threaten our ocean. Western Australia is currently placing targeted, baited drum-lines to kill sharks in waters where sightings or attacks have been reported. Not only does this promote a false sense of security for those of us that choose to swim in the ocean (there will still be sharks, as well other stinging/biting organisms); for sharks, it is accelerating their plight. Some shark species take ten to fifteen years to reach sexual maturity and reproduce, so considering this, killing one reproductively mature female could preclude generations ahead. And like in any ecosystem, when we remove one key species from the food chain, overpopulation of those dependent on the species for ecological balance often results.

Like sharks, we depend on the ocean for life. Containing 97% of earth’s water, the ocean produces more than half of the atmosphere’s oxygen and is a major absorber of greenhouse gases, specifically carbon dioxide. Ocean waters connect to water on land, and circulate through the atmosphere by the hydrologic cycle. In essence, it is a necessity for all. We take risks when we drive a car, and we risk injury by sharks when we surf or swim in the ocean. On land and in sea, for any ecosystem to sustain healthy populations, it must achieve balance. My sincere sympathy goes out to any injured victims of shark attacks. We must realize however that baiting drum-lines and killing random sharks will not guarantee that shark encounters are not possible. In fact, it selectively targets the apex predators of the sea, which regulate lower levels of the food chain, those that we rely on for sustenance. In essence, the only future jeopardized by this practice, could be our own. 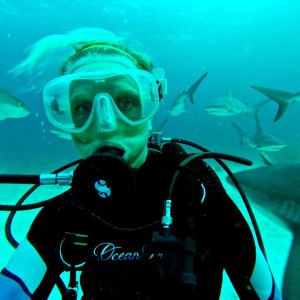 Dr. Erika Sullivan was born in Canada and has been passionate for ocean conservation since she was young. Advocating for animals in particular since graduating as a veterinarian in 2005, Erika currently works full-time as an emergency veterinary clinician in Adelaide, South Australia. Erika learned to scuba dive in Canada in 2012 and since then has traveled to many diving destinations, continuing to expand her interest and knowledge in marine ecosystems. In an attempt to further encourage ocean conservation and share her passion for diving, Erika became a PADI Scuba Instructor in 2016 and earned a PADI Shark Specialty Instructor certification whilst diving with thresher sharks on Malapascua Island in the Philippines.