These seven small species just got to show that size definitely isn’t everything! Here we take a look at our top picks when it comes to underwater macro photography and why these are our favorites.

All photos by Sarah Wormald

Pontohi pygmy seahorses (Hippocampus pontohi) are one of the most recently discovered species of pygmy and they are found on algae such as halimeda algae and various sea grasses. Unlike other pygmy seahorse species they don’t stick to one host and are seen moving from place to place in depths of 3 meters to 25 meters. The pontohi ranges in color from white with pink to yellow patches and there is also a darker variation which can be brown to a reddish hue with red highlights (this was formerly classified as a separate species: Hippocampus servernsi). This tiny seahorse grows up to only 1.7cm which can make it tricky to get in focus, especially as it tends to be mobile. An exceptional image will show the eye, snout, tail and even the filaments (the red hairs on its back). Stay calm and be patient when trying to photograph this little critter – they do move around but will do so less when they are not feeling threatened.

Why do we love taking pictures of nudibranch? There are so many species, so many colours and they are sedate movers which gives us time. The main characteristic to get in focus with a nudibranch is the rhinophores (the two antennae looking appendages on the head). 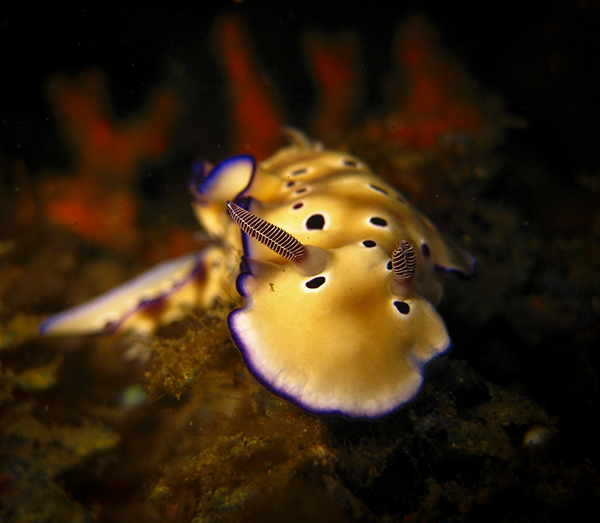 The best shots tend to be from ¾ on (from an angle rather than straight on), this usually results in a clean shot of the rhinophores with the body extending out in to the background and gradually fading out of focus. Try to get down low rather than shooting from above! 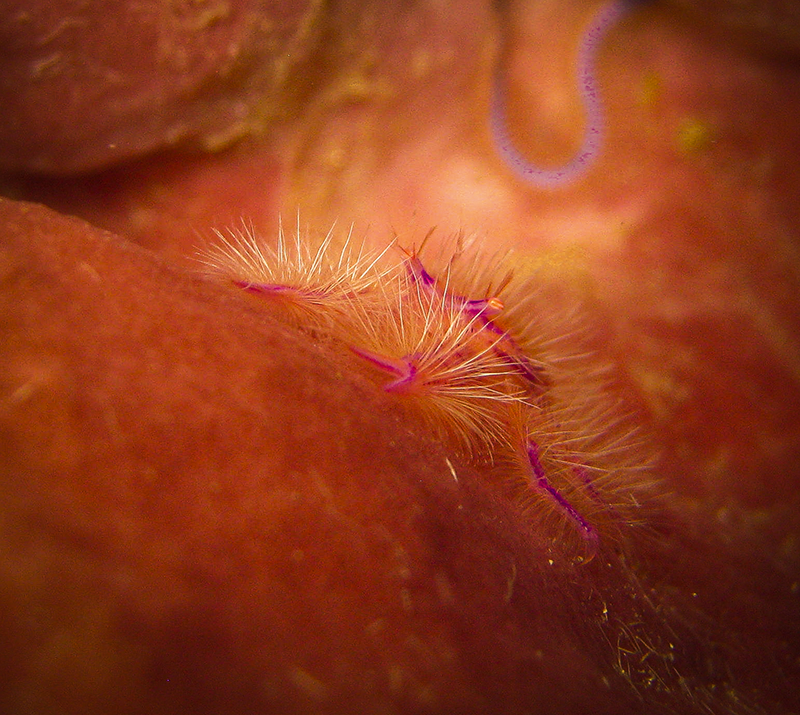 The hairy squat lobster (Lauriea siagiani) is highly photogenic due to its vivid coloration which ranges from vibrant purples to hot pinks. They live in giant barrel sponges in between the vertical ridges that run down the outside of the sponge. They are a shy species and will back away from cameras so having adequate light to get a good shot can be tricky – especially as the ridges of the sponge itself will cast shadows. Their entire bodies are covered in long white bristles and their eyes are bright red. This small species’ carapace (shell) only grows up to 1.5cm. If you find a hairy squat lobster our tip is to look for more as they often inhabit sponges in small groups. Try to get the eyes in focus to give this critter some definition and a small torch for lighting is very handy when you can’t get the right angle with your flash or strobe.

Did you know that there is more than one species of blue-ringed octopus (of the genus Hapalochlaena)? It’s true! Scientists have now noticed differences among blue rings which include the number of spots and colour variations. The blue-ringed octopus is recognized as one of the world’s most venomous marine animals and despite their small size, 12 to 20 cm (5 to 8 in), and relatively docile nature, they can be incredibly dangerous (even deadly) to humans if provoked. They can be identified by their characteristic blue and black rings and yellowish skin. When the octopus is agitated the brown patches darken dramatically and iridescent blue rings, or clumps of rings, appear and pulsate. For macro photographers the bright blue rings bring incredible colour to the picture – of course, divers shouldn’t provoke these creatures for the sake of the perfect shot showing their rings. When trying to photograph this octopus be careful not to get too close (which will cause it to swim away) and try to make sure that the eye is in focus to make it more easily identifiable. 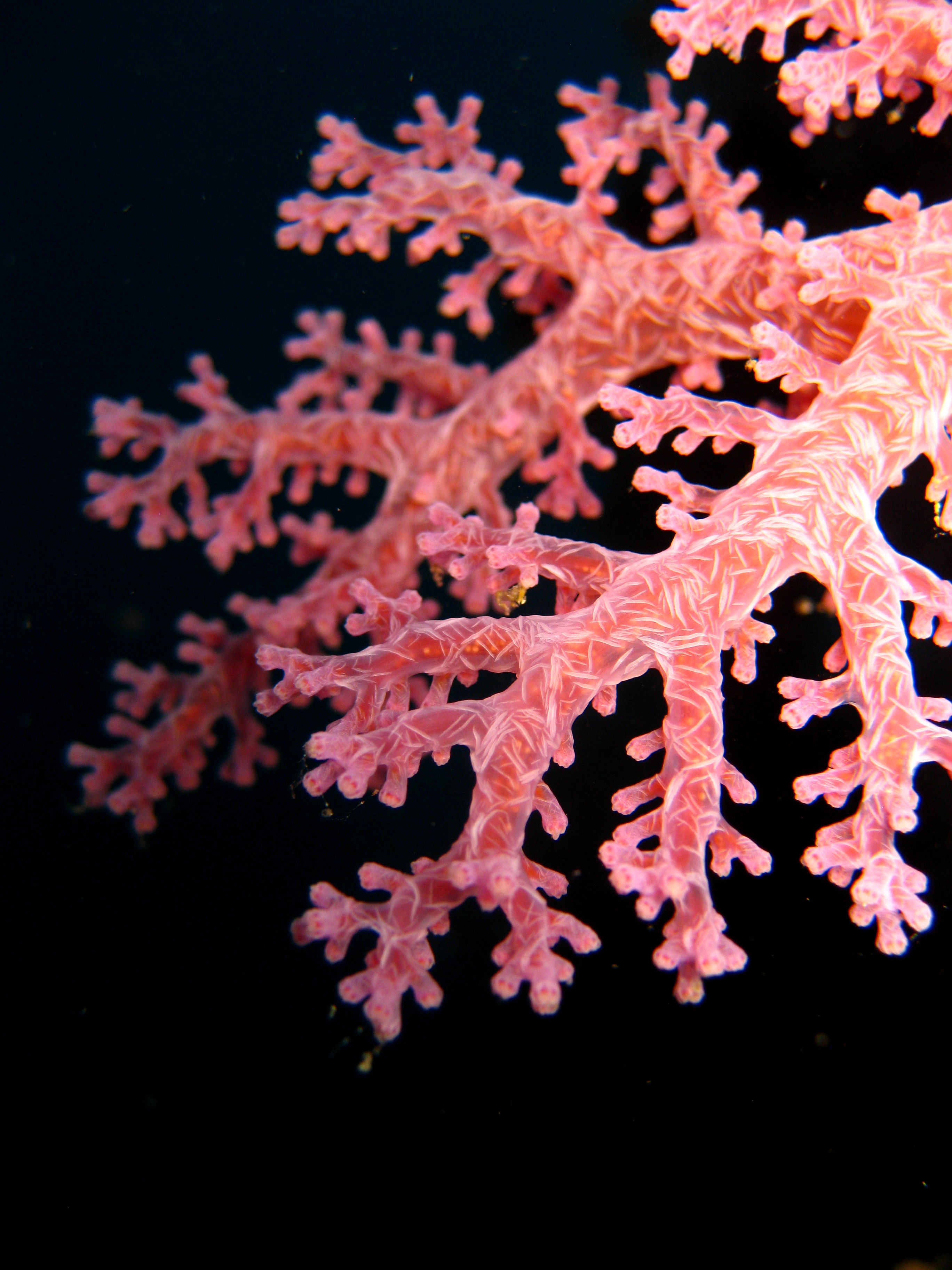 It’s amazing that when we are searching for the smallest of critters it is so easy to overlook the corals which they inhabit. Soft corals are among the brightest on the reef and they are super easy macro photography subjects. They won’t swim away and you can usually position yourself so you are shooting up or out into the blue so there is no background in the picture to distract you – just like in the image here. Soft corals are also great subjects to capture just small sections of, such as small bunches of polyps as opposed to an entire fan which would require wide-angle techniques. When you capture a clean shot the details are incredible. 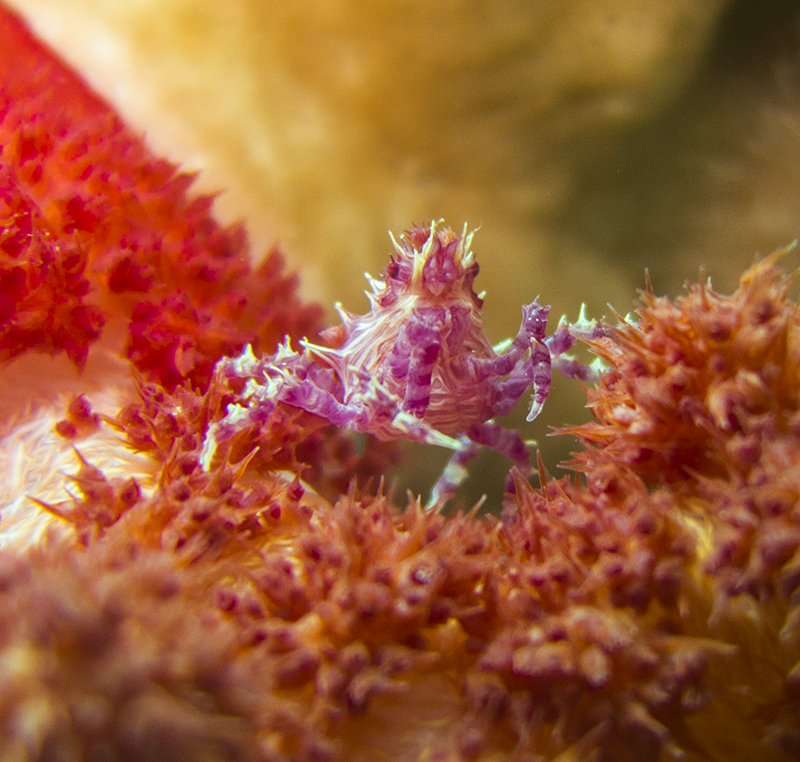 Candy crabs (Hoplophrys oatesii), also known as soft coral crabs, are a species of imitator crab that live in symbiosis with Dendronephthya soft corals. Their bodies, which grow to just 1.5cm, are covered in sharp spike-like tubercles which gives them near perfect camouflage – these tubercles are actually polyps taken from the host coral which they attach to their carapace. Their body color ranges from white, pink, yellow and red depending on the color of their soft coral host. Capturing a clean shot of this critter can be tricky, especially if there is any current which causes the soft coral to move or the crab to retreat. Try to get the eyes and legs in focus and don’t shoot down; try to shoot at eye level with the crab with a clean background to give definition.

There are numerous species of frogfish (genus antennarius) and whilst the hairy frogfish is not the smallest it is a rare find which makes is a highly sought after species to photograph. The hairy frog fish grows up to 25 cm and displays a range of color variations, most commonly from yellow to orange and red through to brown, however, they can also be green, almost white, gray and completely black. The “hairy” name comes from the numerous skin flaps which it grows and which provide it with almost perfect camouflage  on weedy sea bottoms. When shooting any frogfish try to get in close and have the eyes, mouth and lure in focus. 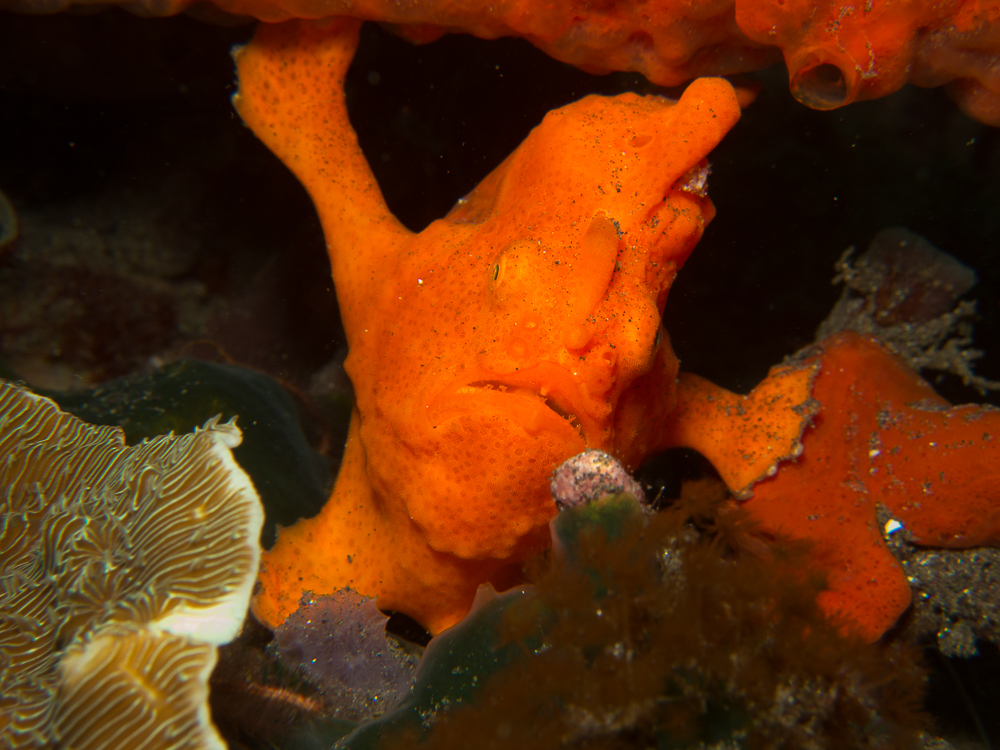 Remember that whenever you are taking any underwater images you should stay relaxed and calm and move slowly and carefully. Maintain neutral buoyancy so you don’t damage any corals, marine life, yourself or your gear. The more patient you are the less likely your subject is to swim away.

If you’d like to learn more about underwater photography and how to get started or to improve your existing skills why not take the PADI Digital Underwater Photographer specialty course? To find out which of your local dive centers are offering a range of specialty courses, use the PADI Dive Shop Locator here.