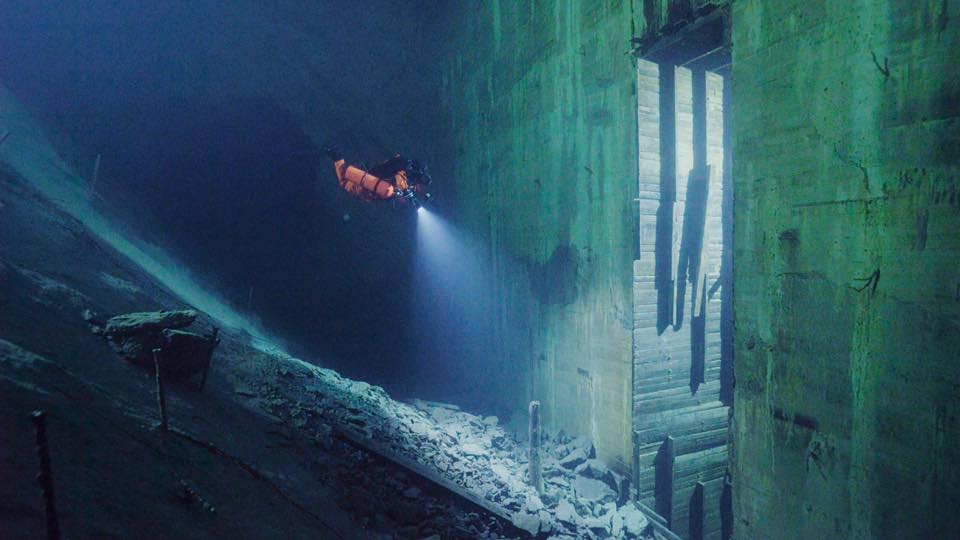 After sharing this draw-dropping photo of PADI AmbassaDiver™ Gemma Smith diving into ‘Hell’s Gate’ in Ojamo mine, Finland, we knew we had to find out a bit more about the unique dive location it was taken in…

Hi Gemma, can you tell us a bit about the mine?

Ojamo mine, Finland, is actually an old limestone mine in the town of Lohja, some 60 km from Finland’s capital city of Helsinki. Mining operations began here in the early 19th century and continued until Finland entered the war with Russia in 1939, and it was turned into a makeshift prison camp. After the war normal work resumed, but in the 1960s mining operations ceased permanently as cheaper options became available and the demand for lime decreased. Over the last several decades the mine has slowly filled up with water. Finland has very few naturally formed caves, so this flooded mine has become one of the most popular diving destinations in Scandinavia, if not the world, and rightly so. Thousands of kilometres of passages are to be found on the many levels of the mine, many still unexplored. Although the exact depth of the mine is not known, it is believed to go many hundreds of meters deep.

What precautions do you have to take to dive in Ojamo mine, Finland?

There are several precautions that need to be taken to dive here. The first of course is that you are diving in an overhead environment. Any type of overhead diving, whether ‘real’ (as in caves/mines) or ‘virtual’ (as in having a decompression obligation above you) requires a lot of training and experience in order to do it safely. The mine has been beautifully lined, so its easy to follow the cardinal rule of always having continuous guideline to the surface, but its still important to maintain an awareness so you always know where you are. The other big challenge of this particular dive is the temperature. The mine water sits at between 3 and 4 degrees year round, so having adequate thermal protection is a must. I was there in December, so the worst part of the the diving was actually the reverse thermocline. In order to complete our deco we had to ascend to the lake above the mine entrance, where the temperature was only 2 degrees! Thank goodness for the habitat at 6m!

How does diving in mines differ from cave diving?

The main difference between diving in mines and diving in caves is the human element. Caves are naturally formed over thousands of years, and humans usually have no involvement with the evolution of the cave. Mines are built by people, worked in by people, and have a human history connected to them. Its industrial archaeology. It’s kind of like combining everything I love about cave diving with everything I love about wreck diving into one amazing experience. Logistically diving in mines is very similar to diving in caves. Of course, there will always be conditions unique to the place you are diving (flow for example when diving in Floridian caves, and incredibly complex navigation in Mexican caves), but ultimately they both require the same skill set.

What would you say is the appeal to dive in a disused mine?

I’m not lying when I say that I think mine diving is some of the most interesting and beautiful diving that can be done. I love history and archeology, so from that point mine diving is fascinating. Seeing a workers boot left behind in the mud from fifty years ago, or an engine that looks like it could start running again at any moment is amazing. Many of these mines still have so many markers and memories of the men who spent their working lives there. Even if history isn’t really your thing, mine diving can still offer so much. Structurally there are some incredible features. In Ojamo there is a certain place known as Hell’s Gate. This was originally built to hold up the roof of the mine when the engineers realised they had tunnelled to within only a few meters of the bottom of the lake. Today it looks like a portal to another world. Just like people travel from all over the world to see the Grand Canyon, mine diving can offer equally impressive sites underwater.

Do you have any memorable experiences from the dive?

On one of the first dives we did, I definitely didn’t appreciate just how cold it was going to be. When we first arrived at the lake that you enter the mine from, the surface was totally frozen over. We had to break open a large hole to even get into the water. We always had surface support, which was definitely a good thing after our first dive! We tried to surface only to realise that the hole we had made to get into the water had frozen over solid during our two hour dive. Our surface support had to break it open again with a scaffold bar so we could get out! After that we always had someone regularly breaking up any small ice chunks before they could close the hole.

How did you get the opportunity to dive here?

This Ojamo trip was actually part of a much bigger film project called ‘Dive Odyssey’ that myself and film maker Janne Suhonen have been working on over the last few months. It’s very hard to make diving movies that are interesting and can grab peoples attention and fire their imaginations. As much as we all love the underwater world, its not really a great spectator sport. Janne wants to change that. Inspired by classic science fiction movies such as Blade Runner and The Abyss, his idea is to make an underwater sci-fi movie of sorts. Nothing comes so close to the mystery and unknown of outer space as the underwater world does, so why not combine the two? This is how Dive Odyssey came into life. We still have one more section of filming to do, but we are nearly there. I can’t wait to see the finished results!

Päijänne on the Rocks 2016 – Ice Diving in Finland