The scenarios below are based on real-life diving incidents documented by Divers Alert Network (DAN).

During the end of a dive, a diver unexpectedly lost her weight belt and began a rapid ascent to the surface from 20ft (6m). “I exhaled and dumped air from my dry suit as quickly as possible and tried to flare my body to increase drag. My dive buddy tried to grab me but I was dragging him up too,” the diver reported.

The buddy team aborted their dive and swam to shore. Luckily, neither the diver nor her buddy reported any injuries.

A lost weight belt need not cause a rapid uncontrolled ascent. Putting a lot of weight on a single belt is akin to putting all of one’s eggs in a basket. It may also increase the tension on the buckle, making it more likely to open unexpectedly.

On the upside, this diver attempted to flare out and increase her drag, to slow her ascent. In the face of an uncontrolled ascent this was the best course of action to take, and may have prevented the incident from becoming more serious.

If the diver had a BCD with integrated weights, the weight could be distributed between non-droppable rear pockets, a weight-belt, the two integrated pouches. Steel tanks and weight harnesses are other ways of distributing the required weight between different locations.

Uncontrolled ascents are relatively rare but when they do occur, every diver should remember the first rule of diving: Never hold your breath!

On the seventh day of a liveaboard trip, a diver’s low pressure inflator unexpectedly stuck in the on position. The diver rapidly ascended from 93 ft (28m) to the surface in about 15 seconds.

“[The incident occurred] on my 18th dive of a seven-day diving trip. We had been diving nitrox at approximately a 32% mix all week.” the diver explained. “I hit the inflator button on my new BCD; it jammed and shot me straight up to the surface…despite me frantically pulling on the shoulder mounted dump valve. There was so much noise and so many bubbles surrounding me and obscuring my vision that I probably could not have disconnected the inflator hose even if I had thought to do so. I broke the surface, was picked-up by the dive skiff and the driver immediately started me on a DAN bottle of oxygen which I continued to breathe from after returning to the boat.” 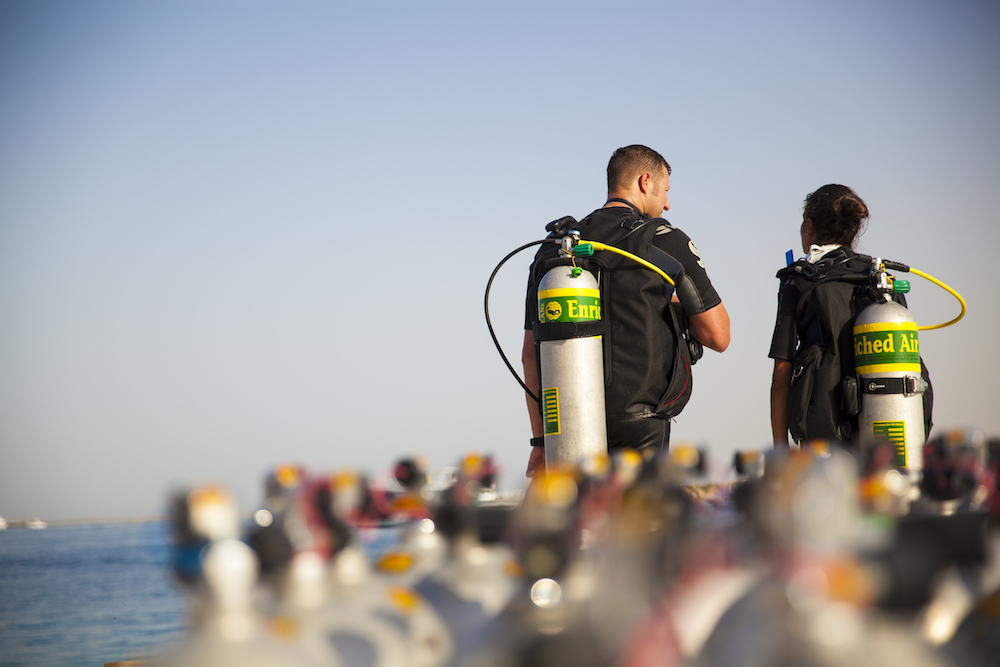 The incident occurred during the first dive of the day, about 20 minutes into the dive. The diver remained out of the water, drank plenty of fluids and stayed out of the sun for the remainder of the day and reported, “virtually no after effects” from the experience.

Notes from DAN:
This diver was very fortunate that this unforeseeable event happened during the first dive of the day, after only 20 minutes, and while breathing nitrox. However, given that it was the diver’s 18th dive in a week and this took place in a remote locale, it was prudent to breathe oxygen, maintain adequate hydration and forego the rest of the day’s diving.

During diver training it is common to practice quickly disconnecting an inflator hose in case such a runaway inflation were to occur. There is something to be said in favor of all divers regularly practicing this skill at the end of a dive, while at the surface. The more often a diver tries to quickly disconnect the inflator hose then the faster the diver will become at achieving it.

Savvy Diver Prevents Uncontrolled Ascent
A diver experienced a rapid ascent when diving a site for the first time. The incident occurred during the first dive of the day in an unexpectedly strong current. Here is the rescuer’s account of what happened:

“I regularly dive with a small group of experienced divers off a privately owned boat. We are part of a group on Meetup.com, and occasionally others join us for a dive. A diver with advanced open-water certification and about 30 dives joined us for an after-work dive on the Jim Torgerson (RSB-1) wreck. The current was strong enough that some divers familiar with this site complained about it.

“The new diver was struggling as he went down along the anchor line with his buddy. A few minutes into my dive, I heard a rapid tank tapping, and another diver pointed to the new diver ascending from the wreck far from the anchor line. He was buoyant and gaining speed.

“I was diving with a SS Minnus dive propulsion vehicle (DPV) and was able to quickly ascend and bring him back to the anchor line. If I had not grabbed him, he would have done an uncontrolled ascent and surfaced in current, unable to get back to the boat on his own.”

Notes from DAN:
This was a typical case of a diver diving beyond his training and experience. Informal dive groups are likely to overlook this issue because of respect for autonomy and freedom. While each diver is responsible for himself, everybody in the group would be affected in case of a dive accident; thus, divers in the group have the right to check each other’s competency. It is not impolite; it is a part of the safe dive culture. Buddy systems among divers who are strangers to each other often fail. It happened in this case, too.

For the buddy system to work, divers need to establish rules before the dive, be comfortable about the other diver’s skills and agree to a common dive plan. When diving in a strong current such as in this case, a buddy check at surface before descent is often impossible. Thus, it is more important to have a good predive conversation and complete cross-checking.

Another diver in this group most likely saved the life of this inexperienced diver. The rescuer probably would not have succeeded without using the scooter, which enabled him to catch up with the ascending diver before he got too shallow and bring him back to a safe depth. An exerted diver experiencing an emergency ascent often ends up with lung barotrauma, arterial gas embolism and drowning. Experienced divers in informal groups should not keep to themselves. Instead, they should volunteer their advice for the good of the entire group.

Pregnancy and Diving: What You Need to Know