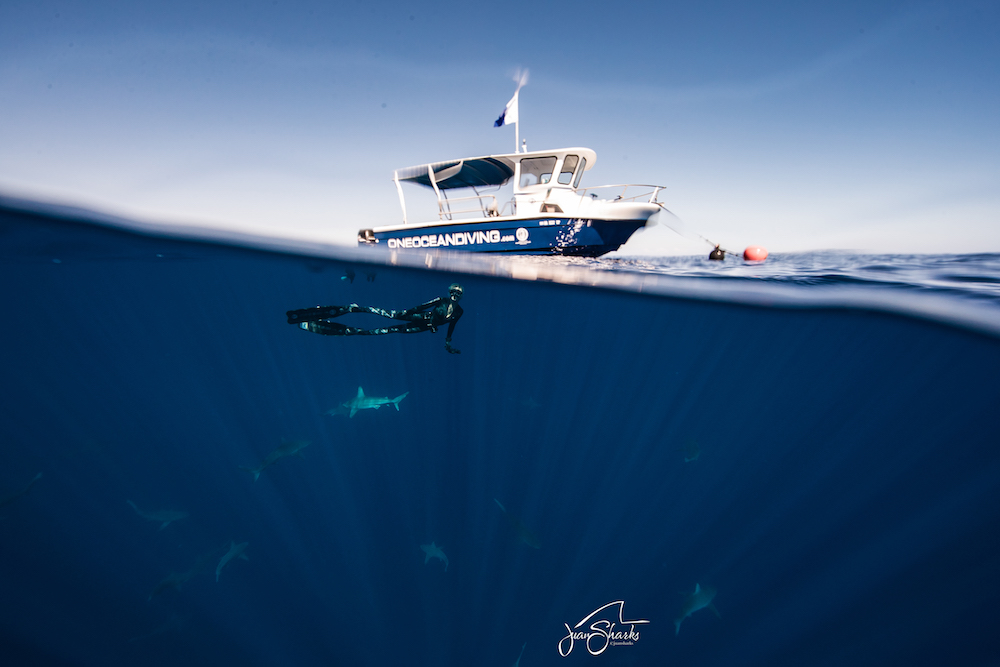 What do a marine biologist, a model, a TED presenter and sharks all have in common? The answer is multi-hyphenate PADI® Pro Ocean Ramsey.

Ocean unites her many talents and skills to help people see sharks in a positive light and actively work for their protection. We recently interviewed this wonder woman and defender of the underwater world to learn how she went from scuba instructor to scientist to YouTube star and conservationist.

You may know Ocean Ramsey from the famous GoPro video where she freedives with a great white shark. She also did a TedX talk.

Ocean first fell in love with sharks as a young girl in Hawai’i. On her website, she writes about her first shark encounter. “I think I was 8 years old. [The shark] swam under me along the beautiful rippling sand bottom, completely disinterested in my presence, I was at once enamored.”

After studying behavioral sciences, psychology and marine biology as an undergraduate, Ocean went on to get her master’s degree in ethology (the study of animal behavior) and focused on shark behavior.

While in college, Ocean got her captain’s license and became a PADI Instructor so she could easily access boats and have the skills to participate in underwater research. “I never thought about working in conservation full time, but scuba students would frequently ask if we would see a shark during any of our dives. I guess I was shocked at the tone of fear they exhibited while asking this question and found myself constantly having to explain that if we did it would be the highlight of their dive and that sharks are actually beautiful and incredible to see. It started to become a regular thing for me to seek out and purposely take my students to see sharks because I wanted them to see what I was talking about, how amazing sharks really are,” Ocean said. 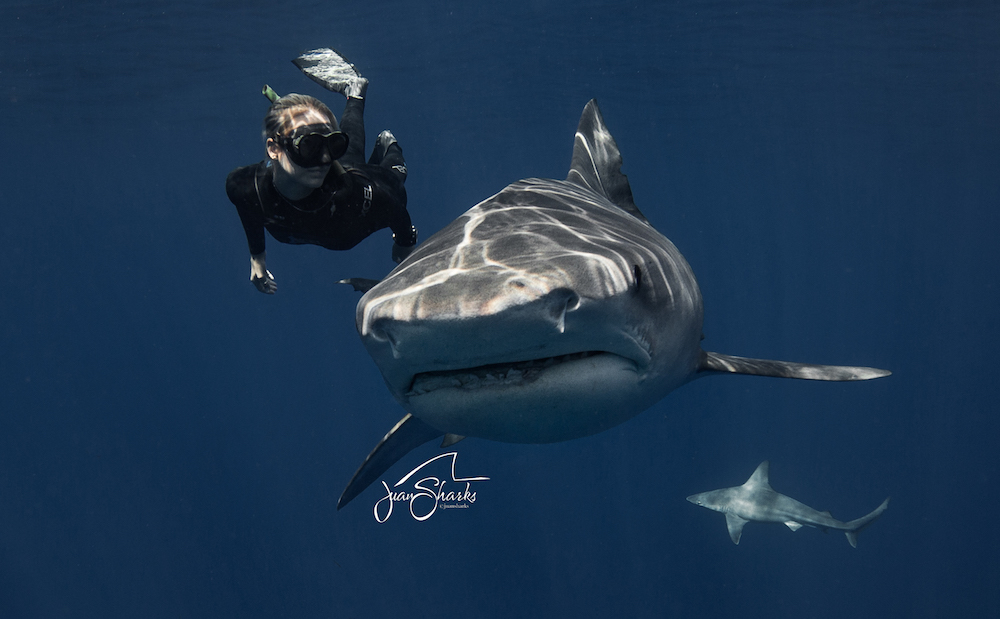 From Shark Counter to Shark Conservationist

A major turning point for Ocean occurred while conducting shark research for her master’s degree. Every day, for many years, Ocean counted sharks, until one day something struck her:

“I still remember the moment I realized I wasn’t seeing silkies anymore. It had been months since I had seen a few individuals and years since I had seen others,” Ocean said. “It was so sad to suddenly realize the sharks I knew and grew up with were disappearing before my eyes and what was I doing?

“I did the math and, in the time it would take to finish my Ph.D., another 600,000,000 sharks would die. ‘What’s the point of studying them if they are all just going to be wiped out?’ I thought to myself. The harsh reality hit me hard, and I made a decision to change my life’s focus and work to actively save sharks.”

“Unfortunately, the traditional method of publishing research papers in scientific journals isn’t the best way to educate and inform the general public. Most people don’t read research papers and the media generally takes the study out of context,” Ocean said. 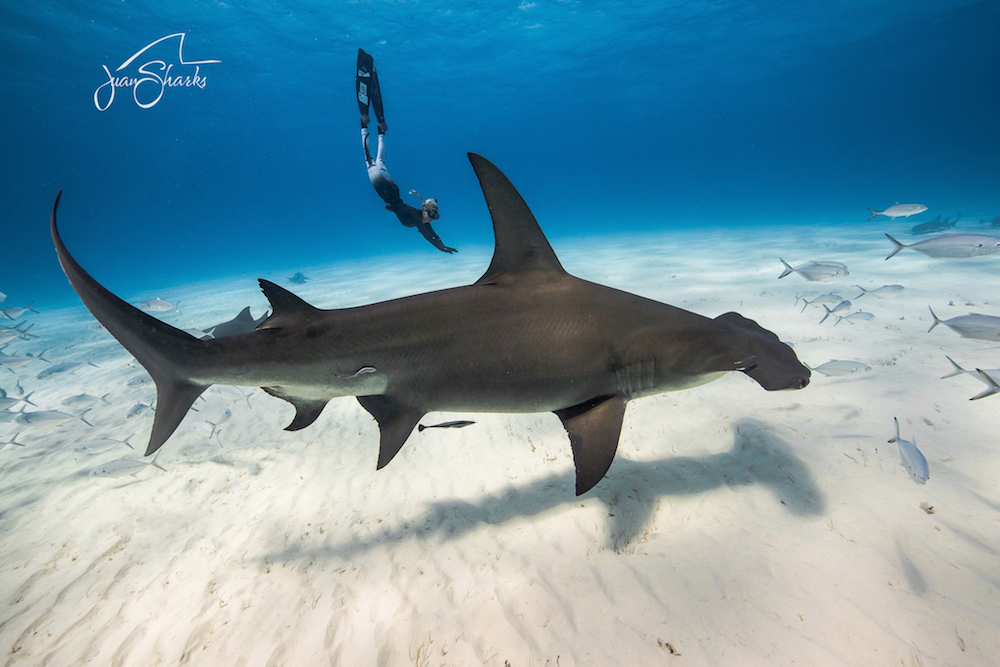 Ocean decided the best way to change people’s minds about sharks, was to offer them a direct experience with the animals. She founded One Ocean Diving and Research and created a pelagic animal interaction research program where non-scientists can observe and interact with sharks. “I felt like I could talk people blue in the face, but until they actually encountered a shark themselves and could see what they were really like, they wouldn’t believe me,” Ocean explained.

By combining her experience as competitive freediver and PADI Instructor with her in-water experience working with sharks around the world and her master’s research on shark behavior (territorial body language, social hierarchy, changes in behavior due to the presence of humans and other external influencers), Ocean developed a crash course in safe and respectful shark interaction. Program participants apply what they’ve learned during the course in a guided, cage-less freedive with sharks at natural aggregation sites in Hawai’i.

“I can take six people per boat, per day,” Ocean said. “Each group is paired with an extensively trained marine biologist. Every person on my team trains full-time with me for more than a year before guiding people on their own.”

The experience has been described by participants as “life-changing,” and “one of the best things I’ve ever done.” But the most important and impactful part of the experience is when participants post photos and videos of their experience and what they learned about sharks to help change the minds of others.

“We’ve never had lower populations of sharks and yet we’ve never had higher numbers of people in support of saving them,” Ocean said “It’s a race to see if I can get enough people to care, speak up, and take action before their populations are completely wiped out.” 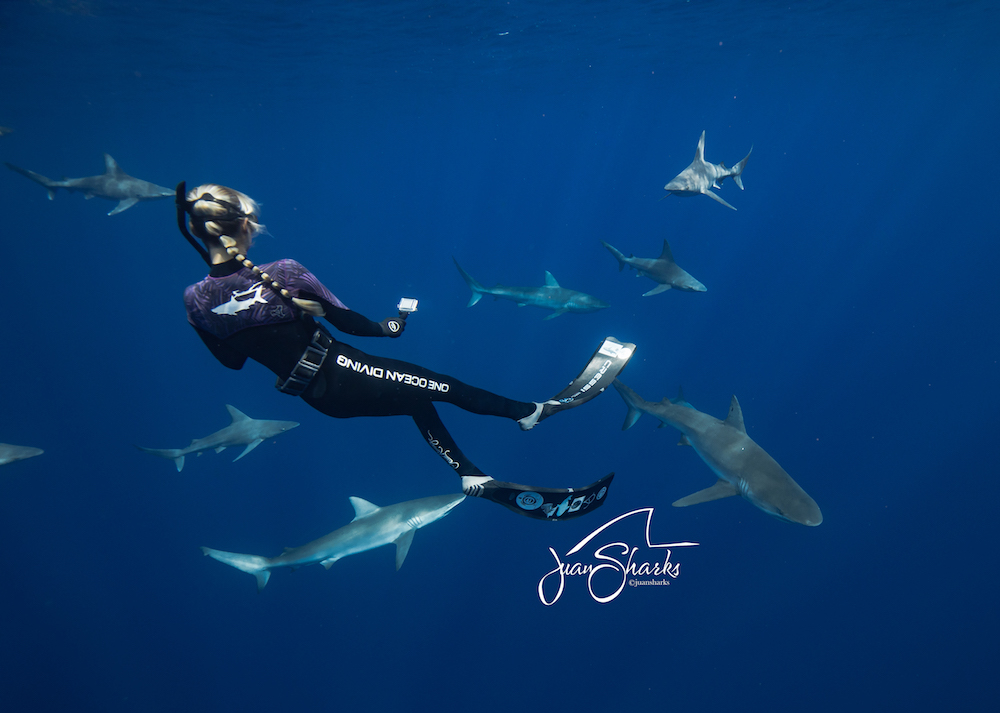 “I’m never more fully awake than when I am in the water with sharks and I never get complacent,” Ocean said. “Sharks communicate with body language: fluffing of the gills, a drop of their pectorals, the arch of their back, their position in the water column and the angle of approach towards me or another shark. Every movement says something, and they’re constantly evaluating my movements as well. It’s like a dance, but it’s also a conversation.

“I control my self-talk and feelings because it can feel like these animals can read your mind. What I realized from studying ethology and working with animals my entire life is that our bodies reflect our emotions. When you’re stressed your muscles tense, animals like sharks, pick that up. So I try to leave whatever has gone on above water out of my mind when I go in and give them my full undivided attention and respect and focus on being present and aware of everything.

“Sharks are far less emotional than humans (thank goodness), but I sometimes see signs of frustrations and I go out of my way to make my movements and intentions very clear so as to avoid confusion which can lead to frustration which can lead to physical aggression. They don’t make noise but they certainly say a lot,” Ocean said.

Ocean is currently working on a research project that measures whether shark behavior is significantly affected by environmental conditions such as weather, having other animal species (including humans) at known aggregation sites. She’s also working on a documentary called Saving Jaws with the goal of releasing it this summer.

“The purpose of Saving Jaws is to offset some of the destructive effects of terrible movies like 47 Meters Down, The Shallows, and other Jaws-type movies that are completely fictitious and are capitalizing on the fear people have of sharks and furthering their lack of understanding and compassion for them,” Ocean said.

“One of the most impactful things you can do for sharks is become a conscious consumer,” Ocean said. “Sharks are used in a variety of different products, like pet food and cosmetics.”

– Don’t buy from cosmetic companies who’s products contain “squalEne” (with an E, not squalAne with an A, which is plant based).
– Avoid buying seafood known to contain shark meat such as “rock salmon,” “flake,” and generic “white fish.”
– If a restaurant or store is serving shark, shark fin soup, or any product derived from shark send them a pre-drafted letter from HelpSaveSharks.Org. 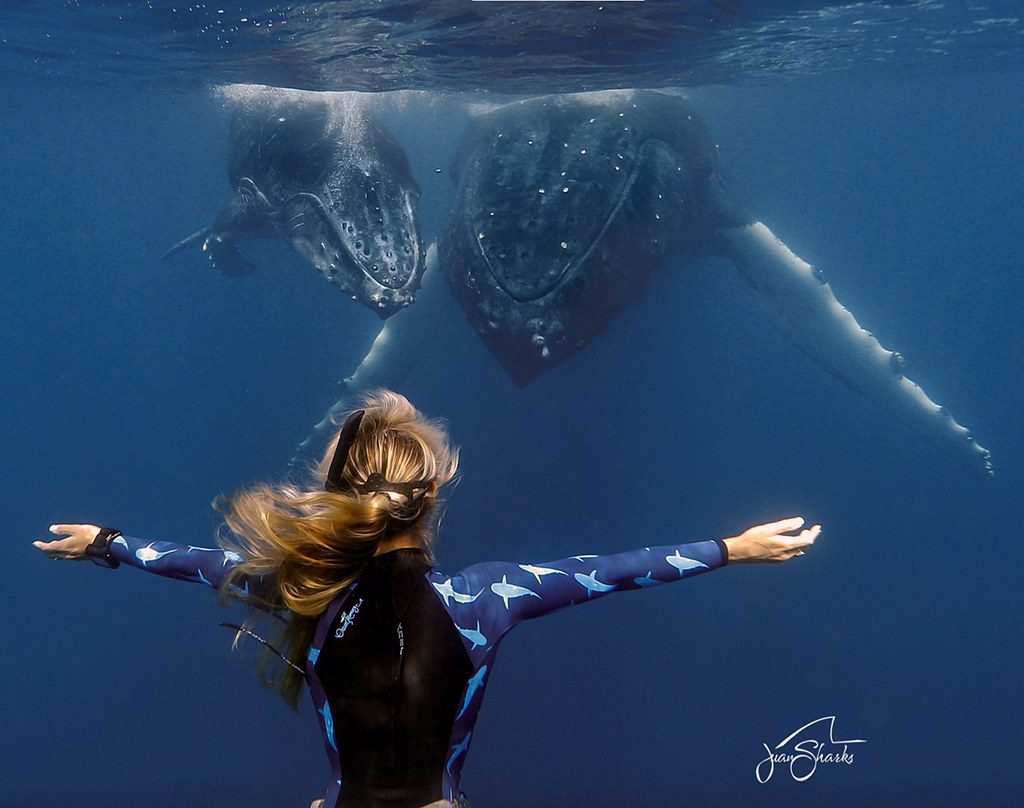 Other ways to help:
– Organize or participate in beach clean-ups
– Avoid single-use plastics like bottle caps, bags, disposable single-use razors, straws, and utensils
– When scuba diving, carry a knife and mesh bag to remove fishing line, rope, and other debris from the reef.
– Speak up for sharks and the ocean in social media and everywhere you go. Share posts like 18 Things More Dangerous Than Sharks.
– Sign a petition and get involved and rally for conservation in legislation.

“I think it’s really important for everyone to realize that you don’t need to be a marine biologist or have any special training or credentials to make a difference,” Ocean said. “Everyone has diverse talents, and by working together we can make positive change happen faster. A business owner can switch to more sustainable business practices, an artist can use their talents to spread awareness, and anyone can start conversations on social media. Together we can have a huge collective impact. 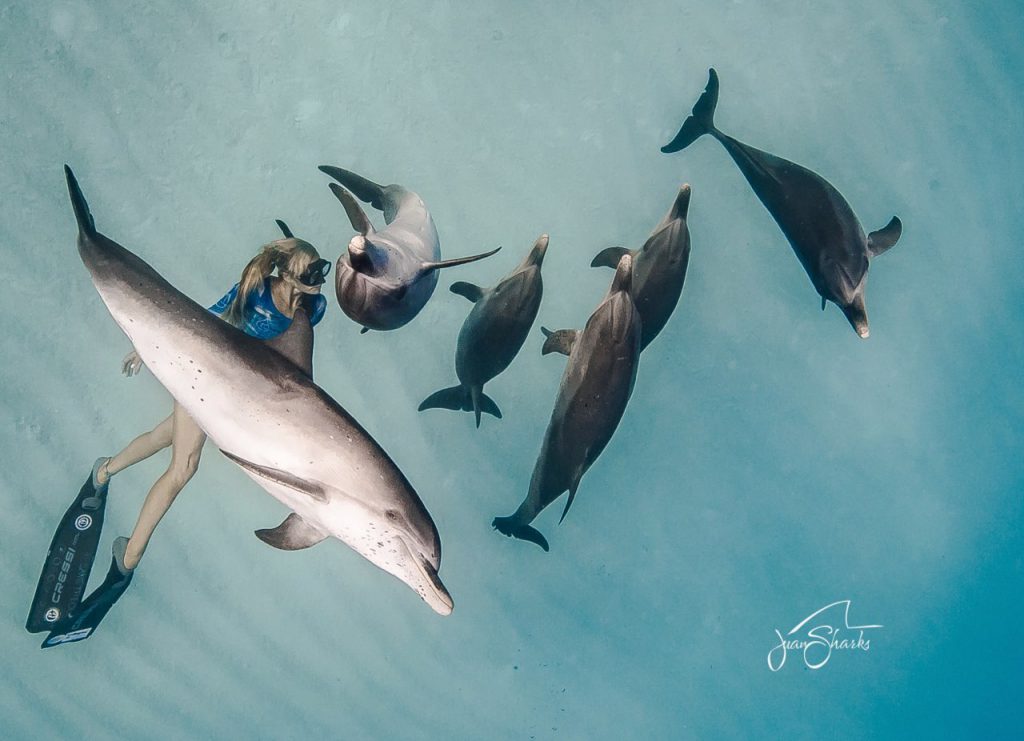 “While it may seem small it all adds up and every effort counts. Mahalo (Thank you) for any and all efforts you make to #HelpSaveSharks and #SaveTheOcean. Aloha & I hope to see you in the water.”

Stay tuned to Ocean’s ongoing and upcoming projects by following her on Instagram @OceanRamsey along with Juan Oliphant @JuanSharks, One Ocean Diving and Research @OneOceanDiving and @OneOceanResearch.

Connect with Ocean Ramsey on Facebook and Twitter @oceanramsey. If you can’t visit Hawai’i, check out the ocean-inspired clothing, bags and other products at One Ocean Designs. All proceeds benefit all shark and marine conservation efforts. 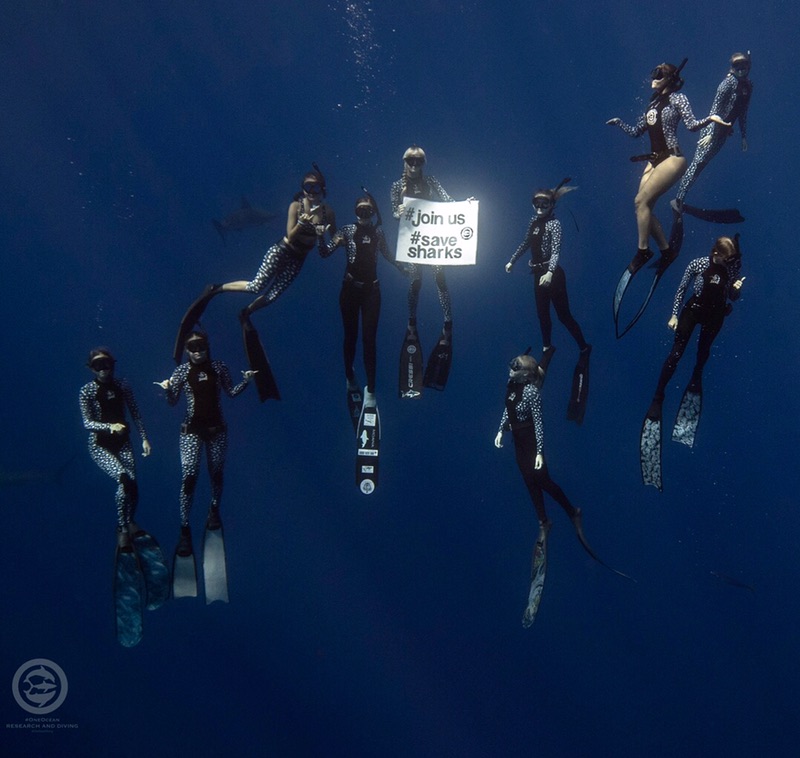