From the mighty bull shark to the glorious great white, divers are fascinated with sharks. Sadly, not everyone sees them the same way. Here’s a look at some common shark myths and the truth behind these misunderstood creatures.

“It has been my experience that sharks avoid people when possible,” says Captain Randy Jordan, a PADI Master Scuba Diver Trainer, and owner of Emerald Divers. “Their underwater intelligence shows danger from a steel-laden, bubble blowing scuba monster.”

Aaron Butler, the Dive Operations Manager at Beqa Lagoon Resort in Fiji, agrees. “Humans simply aren’t on the menu as most species actually eat smaller fish or invertebrates. You have a much higher chance of being struck by lightning or being killed by a falling coconut.”

“Our experience shows the opposite,” says Stuart Cove, the owner of Stuart’s Cove in the Bahamas. Cove has been working with sharks full-time since his first gig in 1979, as a shark wrangler on the James Bond film “For Your Eyes Only.”

Sharks are more excitable at night.

“Not true,” Cove says. “Our sharks vacate the area and go deep – 3,000 feet to hunt for food such as snapper and grouper.”

MYTH: Sharks can sense a drop of blood in thousands of gallons of water.

“For sharks, human blood means nothing to them,” says Sergio Tritto, an instructor and PADI Divemaster at CocoView Resort in Roatan, Honduras. “There are many other marine species such as groupers and moray eels that are way more aggressive than sharks when it comes to food.” 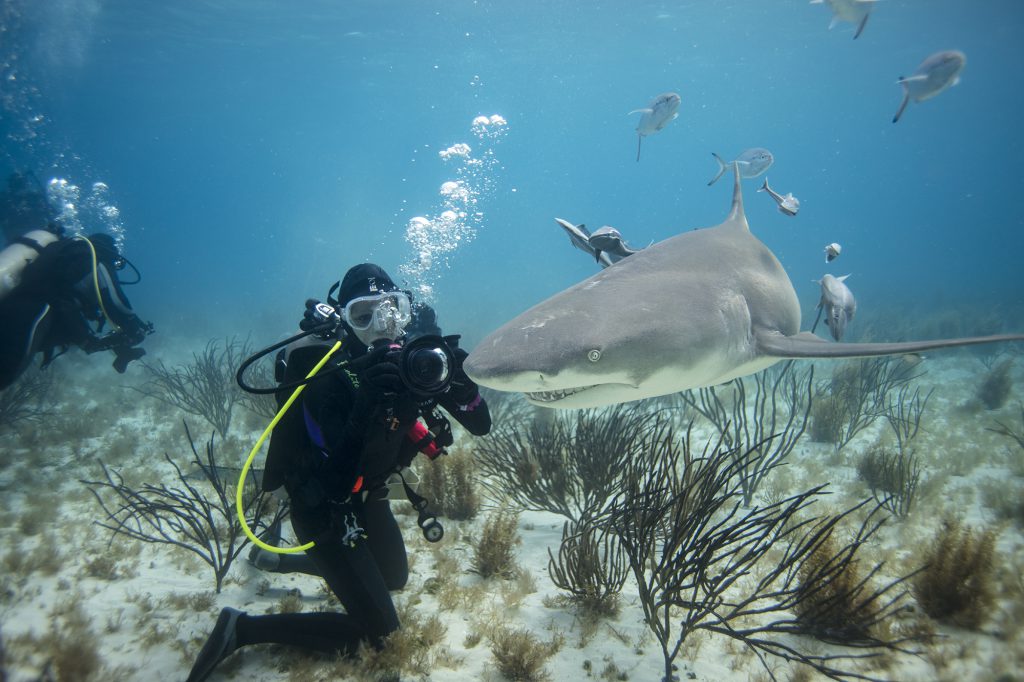 “Sharks keep the ocean food chain in balance by keeping other populations in check and also feeding on the sick and weak,” says Butler. “Without sharks, the eco-system will simply collapse along with the reef systems and our oceans will perish.”

MYTH: The oceans are full of sharks.

“Sharks are in big trouble in South Africa,” says Mike Nortje, the owner and PADI Instructor at Pisces Divers, located in Cape Town, South Africa. “The main impact being long-line fishing and overfishing of other species of fish that sharks rely on for food. We are seeing shifts in the numbers of sharks we are seeing – from white sharks all the way down to small reef sharks.”

Jordan agrees. “It is important that we show divers sharks. When divers see their nonaggressive behavior, they start to like sharks. Next thing you know, they become shark advocates! Conservation begins with education.”

For more on shark conservation efforts and how you can help out, take the AWARE Shark Conservation course.

Can I Dive with Sharks While Menstruating?