Spectacular seahorses: 10 things to know about these tiny undersea wonders 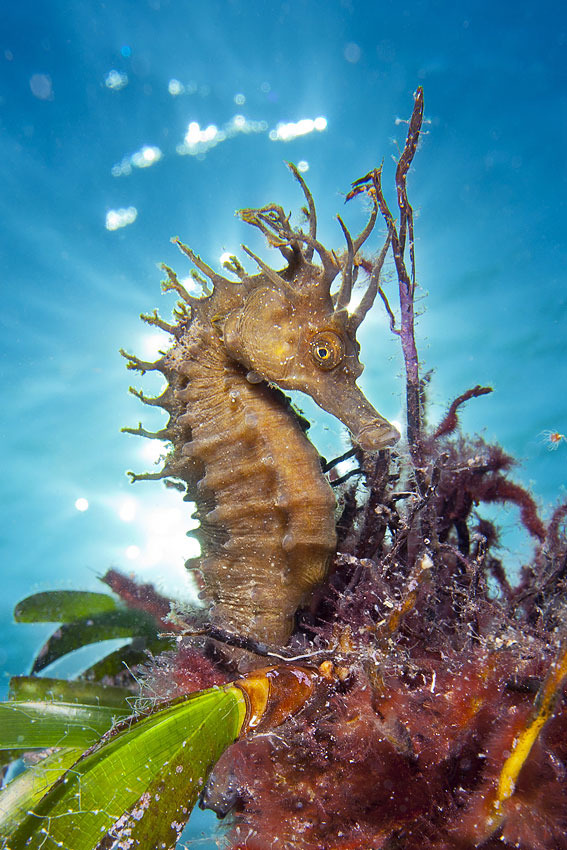 The big creatures that ply the ocean’s waters often get an equally big share of the attention, but some of the most fascinating underwater denizens come in small packages. Seahorses, with their oddly equine looks and unusual lifestyle are worth getting to know a little bit better.

Study up on these unique facts about seahorses to learn more about these beautiful creatures you may see on your next dive.

They are faithful partners

If you’re a seahorse, you can count on one thing: a stable relationship. They are monogamous and once they find their match, they mate for life.

Seahorses belong to the taxonomic group of bony fish. Instead of scales, they have skin that stretches over their bones.

You might think that living underwater demands fine-tuned swimming skills, but seahorses don’t have them! They’re one of two species that swim upright, and they use tiny, fast-moving fins to steer themselves. It’s so tough for them to swim that they sometimes die of exhaustion trying to move from place to place.

Given their ineptitude at swimming, seahorses use their curly, prehensile tails to grasp onto vegetation and just hang out, mostly in shallow coastal waters among coral or sea grass beds.

Male seahorses bear unborn offspring, not females. Females put their eggs into males’ brood pouches, after which the male fertilizes the eggs internally and then waits out the gestation period, barely moving during that time. After gestation, baby seahorses emerge from the brood pouch tiny but fully formed.

They have a big appetite

Seahorses graze almost constantly, using their long snouts to suck up crustaceans. They might eat as many as 3,000 tiny shrimp in just one day.

They are colorful characters

While some seahorses are physically adapted to match their surroundings, others can change color with their environment. They’ve also been observed changing color during mating rituals.

They have great vision

Like chameleons, seahorses can move their eyes independently; that means they can look forward with their left eye and backward with their right. For animals that hunt by sight, it’s a handy adaptation.

They have a big extended family

It’s estimated that there are between 30 and 40 species of seahorse, and possibly many more. They pose a particular challenge to scientists because individuals of the same species can look quite different.

They face some big threats from humans

Dried seahorses are used in some traditional medicines, and you’ll often find them sold as souvenirs as well. Find out more about protecting seahorses and other sea life at ProjectAWARE.org.

How To Seize Opportunities in Scuba Diving

Human in the Water: What We Do as Divers Affects Our Oceans

Watermorphosis: An interview with freediver and choreographer Sophie Henriksson