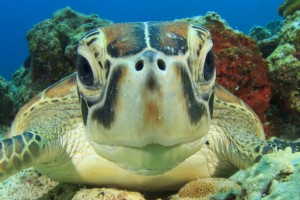 Oceans and lakes are home to many amazing animals, but few underwater creatures are as majestic or awe-inspiring as the ancient turtle. Not surprisingly, turtles are pretty popular among scuba divers, who often seek out dive sites where they’ll be likely to encounter one. So, we’ve compiled a list of 10 more fascinating facts about our shelled friends – read on to learn more!

1. You’re not the only one who doesn’t enjoy drinking saltwater. Sea turtles have special glands near their eyes that removes excess salt from the water they drink. This process makes it look as though as though the turtle is crying.

3. To lay their eggs, female turtles will return to the same nesting ground (on land) where they were born. This is the only time sea turtles leave the water, which means most male sea turtles spend their entire life in the ocean.

4. Turtles might not have vocal cords, but they can still make sounds. The noises a turtle makes depends on its gender and species. Some turtles can cluck, while others make a high-pitched whining sound.

5. Green sea turtles can’t withdraw body parts into their shell like other species can, but their hard shell and tough skin still offer protection from predators. 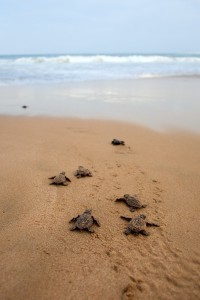 6. Female sea turtles lay around 100 eggs each time, but few of these baby turtles survive to adulthood. Their journey from the nest to the sea can be treacherous, and the sea turtles that do make it to the sea are still highly vulnerable to predators.

7. Unlike most other vertebrates, turtles are able to breathe without a diaphragm (a flexible muscle which causes us to draw air into the lungs). Instead they have to utilize certain muscles and move their body parts to breathe.

8. To capture food, snapping turtles trick fish into thinking that their tongue is a worm, which then leads the fish right into danger.

9. Each species has a different diet. Some sea turtles eat crabs and clams while other species prefer soft-bodied animals like jellyfish.

10. The turtles need your help! There are many species that are either threatened or endangered due to pollution and fishing gear. Turtles who love jellyfish are often caught out by mistaking plastic bags for their favourite snack. Visit Project AWARE for information on how to help protect marine life.

Like these facts and want to know more? Visit the ScubaEarth Critter Finder to find out more about your favourite ocean residents.