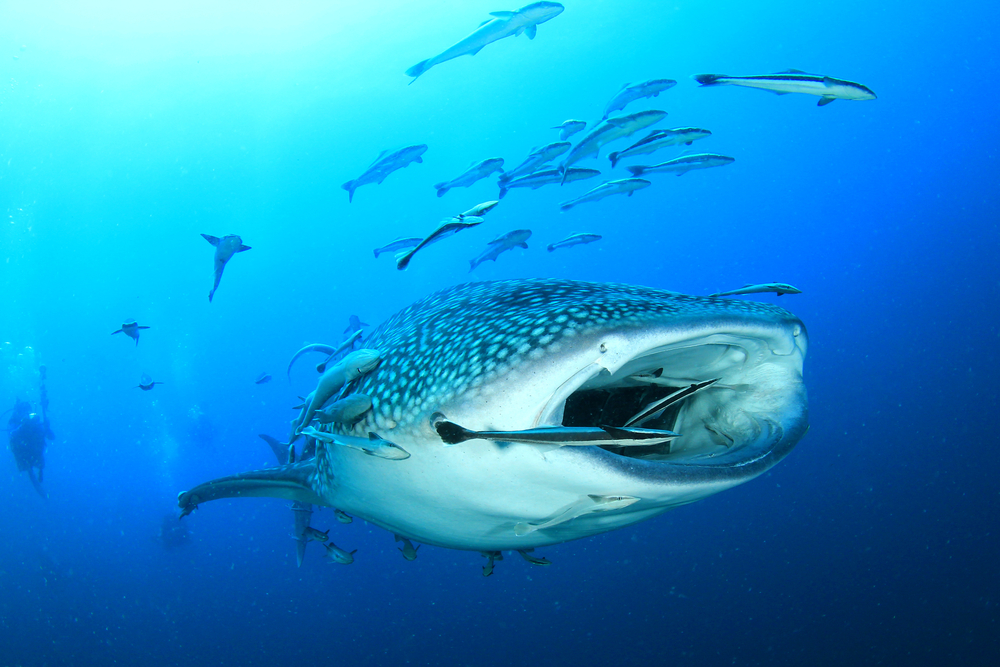 Small critters are cool, but we’re betting that most of us became divers to see the big stuff. If you signed up to see sharks, whales and mantas, check out Sport Diver Magazine’s incredible collection of the world’s 36 best big-animal encounters.

BELUGA WHALES | WHITE SEA, RUSSIA
One of the world’s rarest encounters, you’ve gotta have thick skin (or a great drysuit) to dive with beluga whales. The whales, which live only in Arctic and sub-Arctic waters, are protected from the cold temperatures by a thick layer of blubber. When the White Sea freezes over in winter, the paper-white mammals swim under the thick layers of ice, surfacing to breathe where the ice is cracked. With its flexible neck and supple body, a beluga can twist, turn and maneuver in confined spaces. Belugas are big and curious but not aggressive — mostly you’ll watch them play at underwater acrobatics, making you feel as if you’re the luckiest audience in the world (if not the coldest). — Franco Banfi

BLUE SHARKS | SOUTHERN CALIFORNIA
Fall in with a bucket of chum in virtually any temperate ocean, and you’ll likely attract a few “blue dogs,” but it’s tough to beat the cageless encounters you’ll have in Southern California. Perhaps it’s the quality of the light in sunny SoCal that makes the blue sharks’ flanks glow with such brilliance, or it might be the outstanding visibility that makes them appear more electric blue than their cousins overseas. Either way, you’ll love the experience of watching a shimmering blue shark snake its way toward you up the chum slick. Remember to hold your ground but not your breath as the slow-moving ocean wanderer comes in for a close pass, its midnight-blue eye fixed firmly on your gaze as it slowly swims past. — Andy Murch 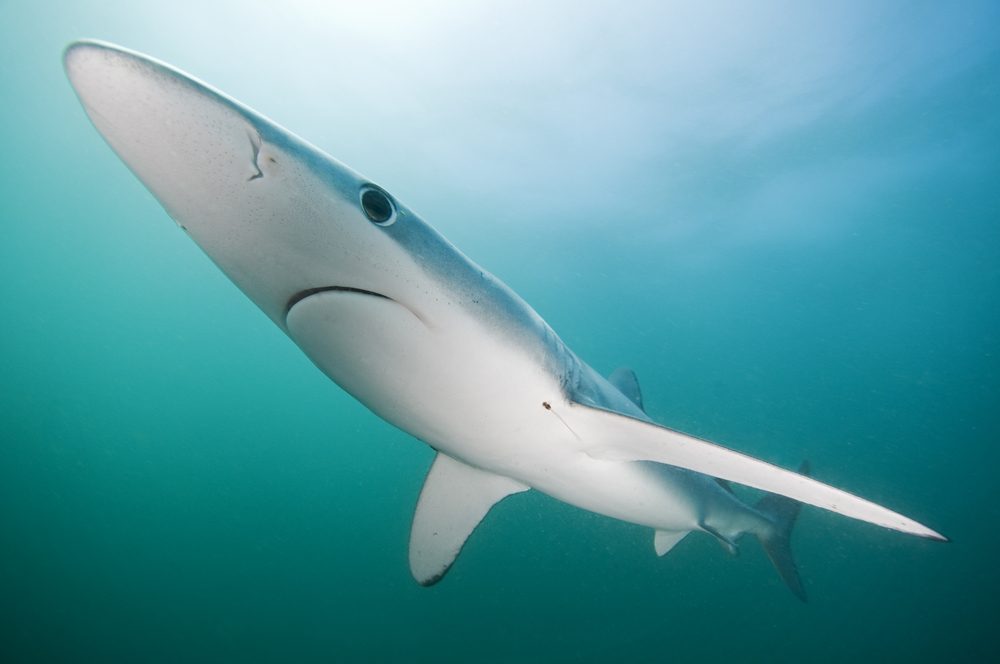 MINKE WHALES | CAIRNS, AUSTRALIA
Gear up (in mask, snorkel and fins) as the crew strings two long ropes from the boat’s stern, hold on, float, and wait for the show to begin. At this spot on one of Australia’s Ribbon Reefs, minke whales gather to, well, do what we’re not exactly sure. It won’t matter as you gaze upon their sleek, aerodynamic bodies, 30 feet down, streamlined to perfection as they glide effortlessly in the water. As time passes, the large whales grow more comfortable with your presence, and they get close enough for eyeball-to-eyeball encounters that’ll leave you breathless. You’re guaranteed to feel a new consciousness and acknowledgment from each encounter with these magnificent mammals. — Vanessa Mignon 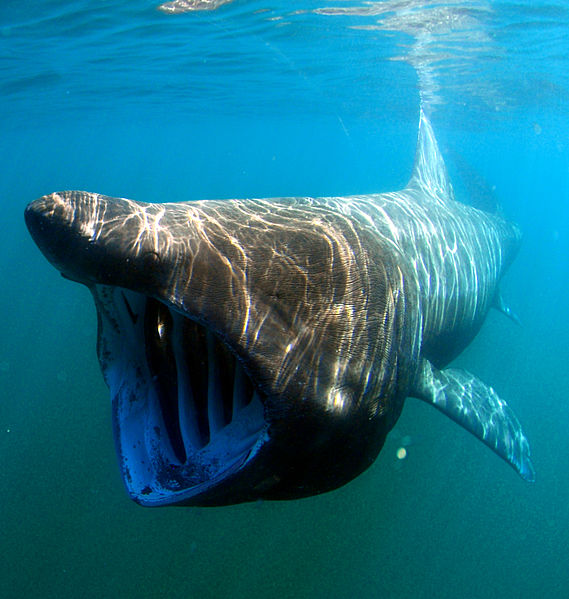 Basking sharks don’t just show up on just any snorkel trip — you have to go out searching for them. And the first sighting from the boat is always of that colossal dorsal fin. Basking sharks are already big — the second-largest fish in the sea — but their dorsal fins still seem oversize. Seeing this massive fish at the surface quickens the pulse and sharpens the senses. Time to get wet. The chilly, green, plankton-filled water reveals little. You look to the boat for guidance. They’re pointing behind you. You turn and spot that dorsal fin heading straight for you. You look underwater. Nothing. Above again and adjust your position to intercept the shark. You look underwater, and a huge mouth slowly materializes. Which is when you have to remind yourself that the 25-foot shark eats only plankton. It powers past like a locomotive and is gone. You close your eyes to replay the action. You want to do it again. — Alex Mustard

CROCODILES | RIVIERA MAYA, MEXICO
Cenotes are holes in the Yucatan limestone that connect underground rivers with the jungle above. Sunlight streams into each cenote, in turn bringing life to these freshwater ecosystems — amazing underwater gardens full of aquatic plants, turtles and various species of fish. And like any healthy ecosystem, there is a top predator to keep life in balance: the Morelet’s crocodile. Shy and elusive, it might take a while poking about the bushy edges of a cenote to find this small, slender croc, but when you have the opportunity to finally see one up close, you’ll be amazed that thousands of years of evolution has created this: the perfect hunter. — Javier Sandoval 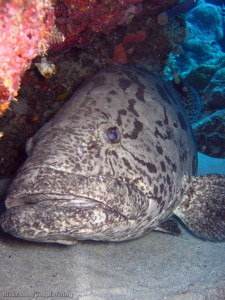 Potato cod are a bit like giant puppies. They love attention and a pat. (Though we don’t recommend doing so.) They don’t wag their tails, but they do hang around under the dive boat, soaking up attention at the famous Cod Hole on Ribbon Reef 10. These large fish aren’t afraid to throw their weight around during the regular cod feeds — they can move surprisingly fast and will do their best to get to the plastic container holding the food. but once the feed is over, they return to their placid state, happily posing for photographers and videographers. If you’re patient and wait for most of the dive group to disperse, you can even watch cleaner wrasse giving the cod a post-meal clean. Which, come to think of it, might make them seem a bit like giant cats. — Seanna Cronin

MANTA RAYS | KONA, HAWAII
Some animals are extra cool because they’re less common — we’re looking at you, humpbacks — but manta rays, with a cool factor of infinity, are fairly widespread. Socorro, Galapagos and the Maldives are home to excellent encounters, but it’s the big Island of Hawaii, with a truly one-of-a-kind manta experience. Every night, boats from Kona gather in Garden Eel Cove. A powerful light box is placed 15 feet underwater; it attracts plankton which, in turn, bring in upwards of 40 mantas that scoop up the food only inches from your face. And while you know there are plenty of other mantas in the world, these personable rays — many of which return night after night — make it seem as if it’s a private encounter of your very own. — David Espinosa 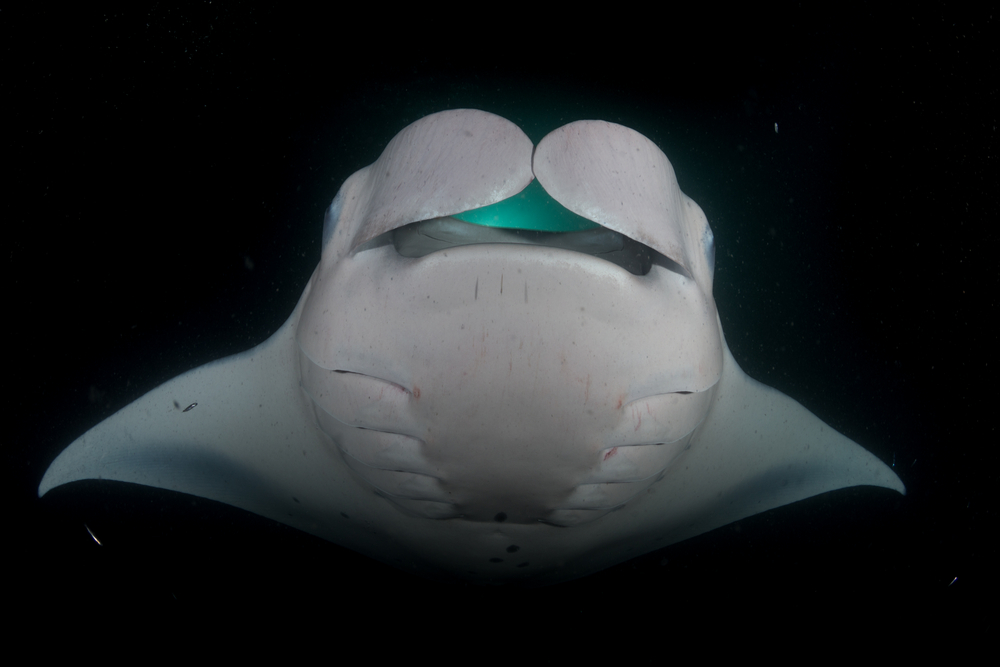 To find other places you can scuba dive with these amazing animals, check out the ScubaEarth Critter Finder.