With their devilish appearance and incredible surface stunts, it’s easy to see why divers and marine biologists alike are fascinated with devil rays. There are actually nine different species of devil ray, all part of the genus Mobula – read on to learn more about them..

#1 Devil rays are the only vertebrates that have three pairs of working limbs: pectoral fins, pelvic fins and cephalic fins. The latter is where they get their name from; when not feeding, their cephalic fins are curled and point forward and down, giving the appearance of devil horns.

#2 These guys aren’t newcomers to the ocean; according to fossil records it’s believed that devil rays have been around for around 20-25 million years.

#3 The different species of devil ray can be spotted across a wide spread of environments, from tropical to temperature waters and from coastal to deep water habitats. Unlike many other rays which stay relatively still, devil rays prefer to keep swimming through the ocean. Giant devil rays are commonly found in the Mediterranean and eastern Atlantic, whilst pygmy devil rays prefer the Indian Ocean and Western Pacific. Divers in the Gulf of California may spot spinetail mobulas or smoothtail mobulas.

#4 Devil rays are closely related to stingrays, although only the spinetail mobula (mobula japonica) has a stinger at the end of its tail. 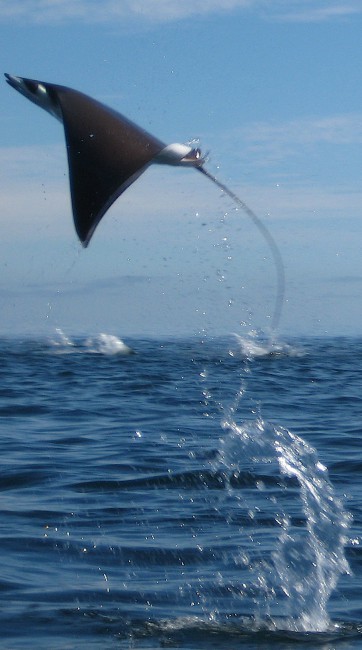 #5 A recent study revealed that, while feeding, devil rays can dive to depths of nearly 2km for around 60-90 minutes, at speeds of 13mph (22km/h). This makes them some of the deepest, fastest divers in the ocean. With bottom temperatures as low as 4°C, it’s believed the rays first bask in shallower, warm water to heat up a network of blood vessels in the brain, ensuring it stays active during their deep, icy dives.

#6 Devil rays are ovoviviparous; this means that during reproduction, the female develops and hatches her eggs inside the body, before giving birth to live young (usually a single pup, though in some rare cases, two). With some species, such as the giant devil ray, the female will be pregnant for over two years!

#7 Despite their namesake, devil rays are actually harmless, shy creatures and filter-feed on plankton, krill and small fish.

#8 It’s not uncommon for devil rays to perform incredible surface acrobatics. High jumps, twists, turns and belly flops are all part of their show, which has been captured many times such as in this footage by the BBC. There’s plenty of debate over why they do this, but communication, courtship rituals, escaping from predators and removing parasites are all cited as reasons for this behaviour.

#9 Devil rays are under threat from fishing, boat traffic, habitat decline and pollution at varying levels of concern, with the giant devil ray currently listed as Endangered (EN) on the IUCN Red List. Although not usually targeted by fisheries, devil rays often become victims as bycatch or from entanglement. The good news is that Project AWARE have already made a positive impact to help protect devil rays (and other species). Find out more and see how you can help continue the movement.

Want to learn more about these amazing creatures? Check out ScubaEarth’s Critter Finder for more fun facts and photos.