Your Guide to Diving in Australia

Australia is a dream diving destination for many divers, and if it’s not on your bucket list, it should be! Not only is Australia home to the Great Barrier Reef, it offers diverse dive sites and phenomenal marine life, including endemic species, the whole way around its coastline. Here’s just a few of the highlights of Australia’s underwater world. 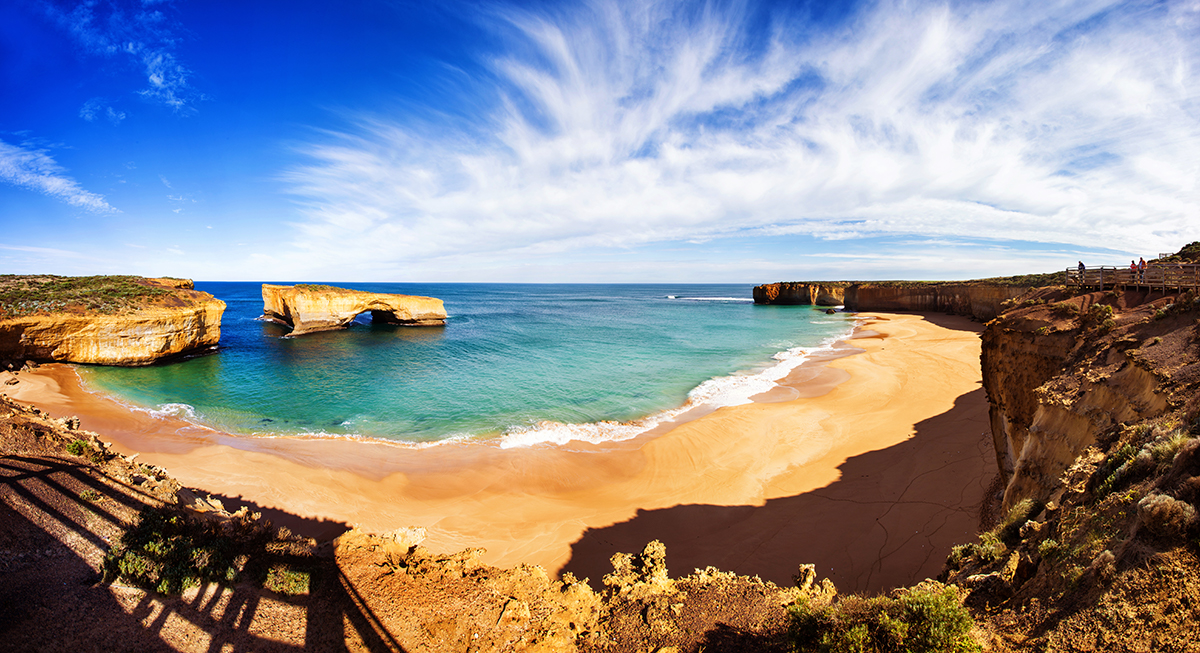 From the cosmopolitan Gold Coast to happening Brisbane and the tropical city of Cairns, Queensland has something for every traveller. Stay in some of the world’s best hotels, explore numerous white sand beaches, shop until you drop, dine out, go whale watching and, of course, go scuba diving! Queensland is a great place to visit all year round with a climate that ranges from hot and humid in the north, to comfortable yet cooler temperatures in the south. Annual water temperatures in the Cairns region range from about 25 to 29 degrees Celsius (77 – 87 F).

In Queensland, Cairns is the gateway to the phenomenal Great Barrier Reef which hosts over 600 types of hard and soft corals, over 30 species of whales and dolphins, 1,625 species of fish and 33 species of sharks and rays.

Meet the friendly and fearless potato cod which gave Cod Hole its name, drift dive on the Osprey Reefs while looking out for manta rays or enjoy hanging out at Lighthouse Bommie where minke whales are spotted during the winter months.

Or, if you want to dive one of the most famous wrecks on the planet, the SS Yongala is located here in Queensland too. It’s home to various species of rays, sharks and reef fishes and with the depth ranging from 15 – 35 metres (49 – 114  ft), this incredible living reef is accessible by divers of all levels.

If you’re visiting Brisbane, be sure to check out Flinders Reef while you’re there. It’s a stunning reef off Moreton Island which has abundant marine life including over 150 species of fish, turtles, sting rays, wobbegong sharks (also known as carpet sharks) and even occasional passing manta rays. Enjoy the diverse sites which include walls, swim-throughs, caves and pinnacles. It’s a vibrant reef which should not be missed!

Just like Queensland has something for everyone topside, so too do the dive sites.

New South Wales (NSW) is distinguished by its coastal cities and national parks. Its capital city, Sydney, is home to iconic structures such as the Sydney Opera House and Harbour Bridge. Inland you’ll find the rugged Blue Mountains and on the shoreline are kilometres of surf beaches and awesome diving! If you’re diving around Sydney, water temperatures range from 22 – 25 degrees Celsius (71 – 77 F) throughout summer and drop to 16 – 19 degrees Celsius (60 – 66 F) in Winter.

The south coast of NSW, is a favourite destination for many divers, especially areas around Wollongong and Shell Harbour. Dive Bass and Toothbrush Island for frequent cuttlefish, ray and grouper sightings or visit The Docks dive site at Jervis Bay for some excellent cave diving, teeming with life.

In the north, one of the highlights is the Julian Rocks Marine Park off Byron Bay. This protected marine area has abundant marine life and offers diverse marine species.

The central coast region also has some spectacular sites, including the HMAS Adelaide wreck which was scuttles in 2011.

Victoria is a diverse state and likewise, its temperate waters are home to some diverse topographies and environments. Explore wrecks caverns, walls and sand bottoms while discovering incredible marine life. The Port Phillip Bay region, near the metropolitan city of Melbourne is home to cuttlefish, octopus, rays, sea horses and playful seals. 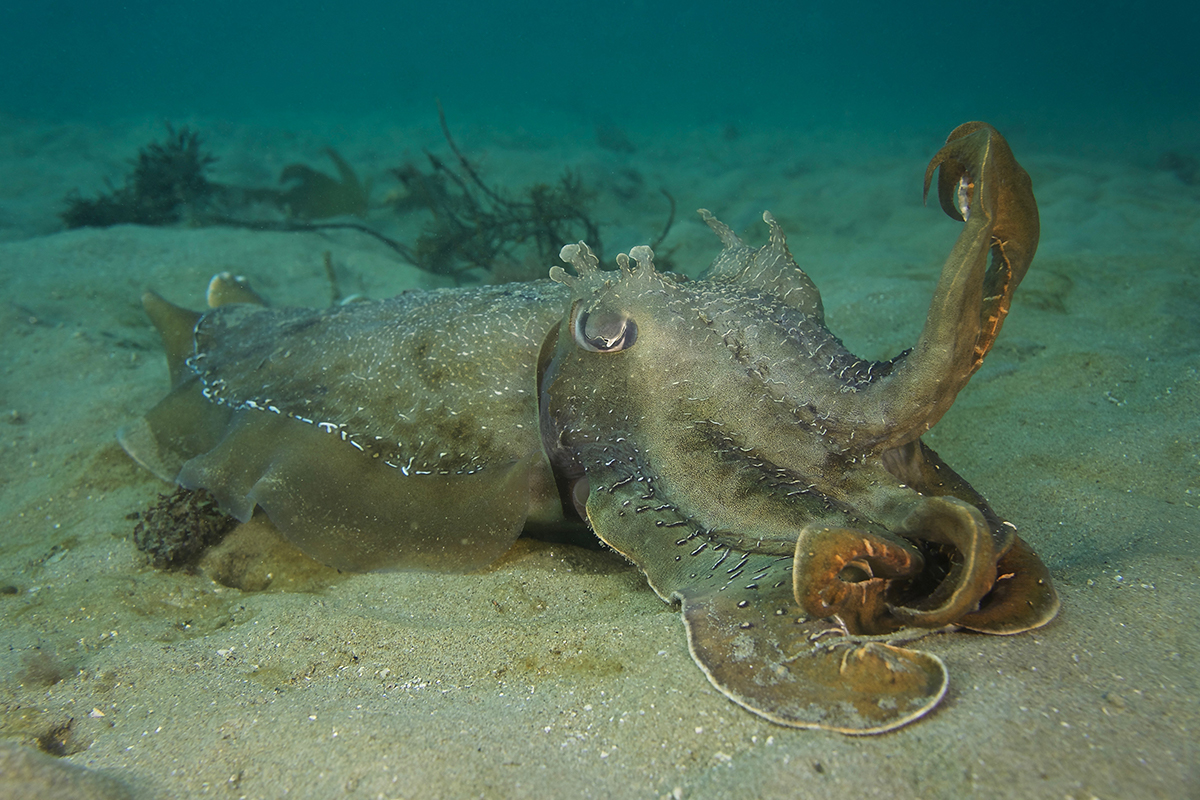 Melbourne enjoys a temperate climate, with warm Summers from December to February, a mild and balmy Spring and Autumn and cooler Winters from June to August.

The HMAS Canberra ship wreck is now a marine reserve and should not be missed. The wreck sits at 28 metres (91 ft) at its deepest point but reaches just 5 metres (16ft) below the surface. The wreck sank in 2009 and is now occupied by a range of marine species.

Another highlight is the Lonsdale Wall which makes up several different dives depending on your depth and where you start and exit. The wall has many small ledges, overhangs and swim throughs which are great places to spot hiding fish and critters. 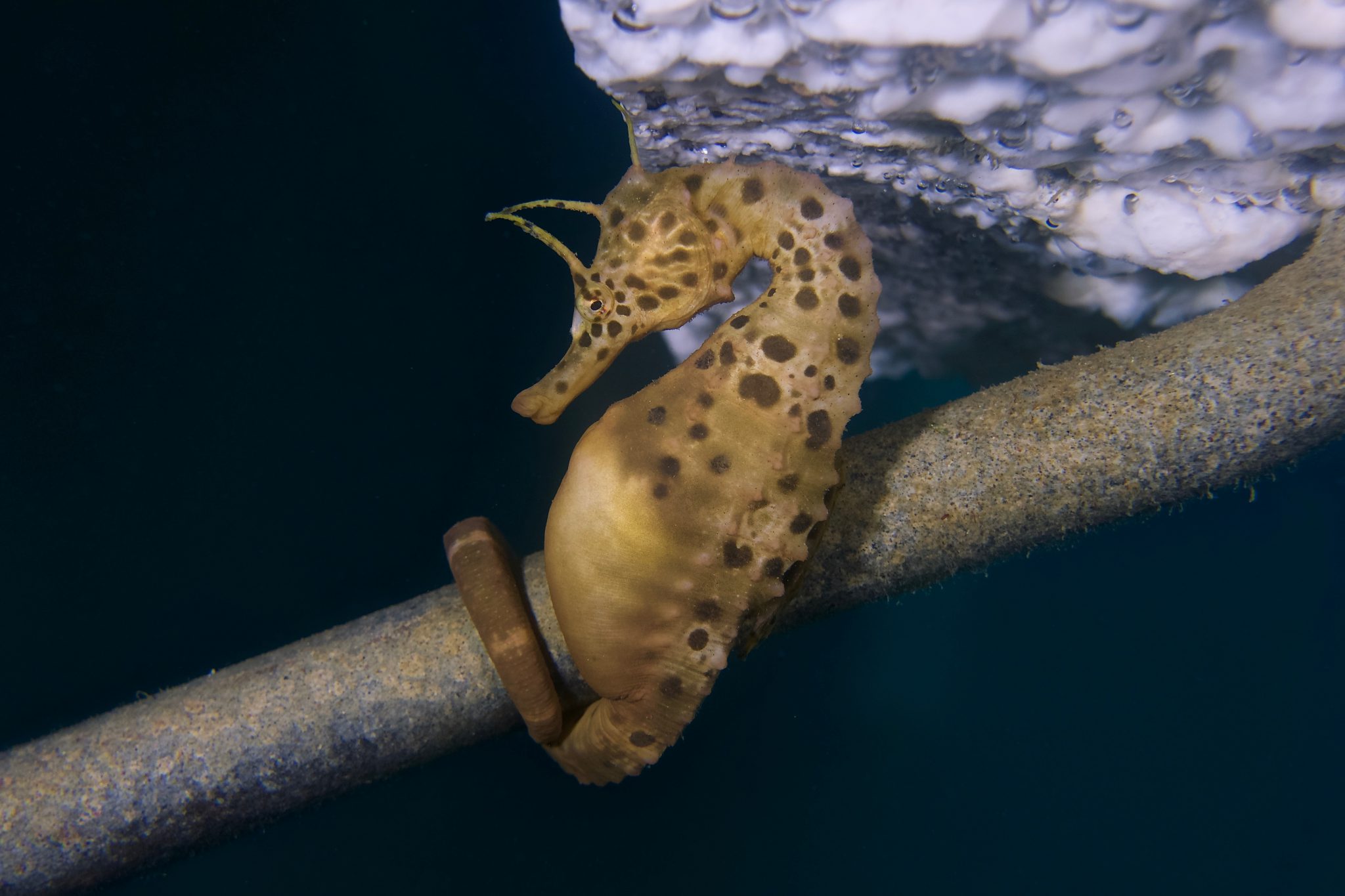 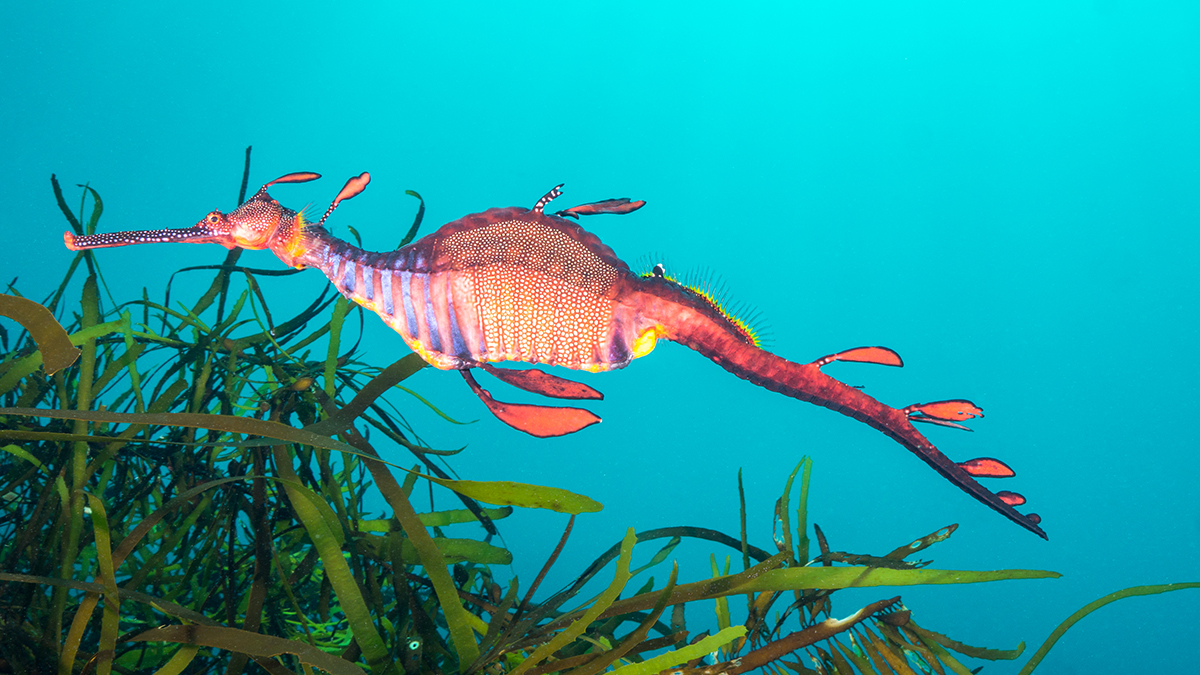 Famous for its natural and untouched beauty, Tasmania sits south of mainland Australia. Tasmania and its 334 surrounding islands make up some great dive spots. With cooler temperatures than on the mainland, visibility is usually exceptional and dive sites include wrecks, caverns and huge boulders which are home to endemic species. In Summer, the average maximum sea temperature is 21 degrees Celsius (69 f) and during the Winter months, temperatures can drop as low as 12 degrees Celsius (52 F). 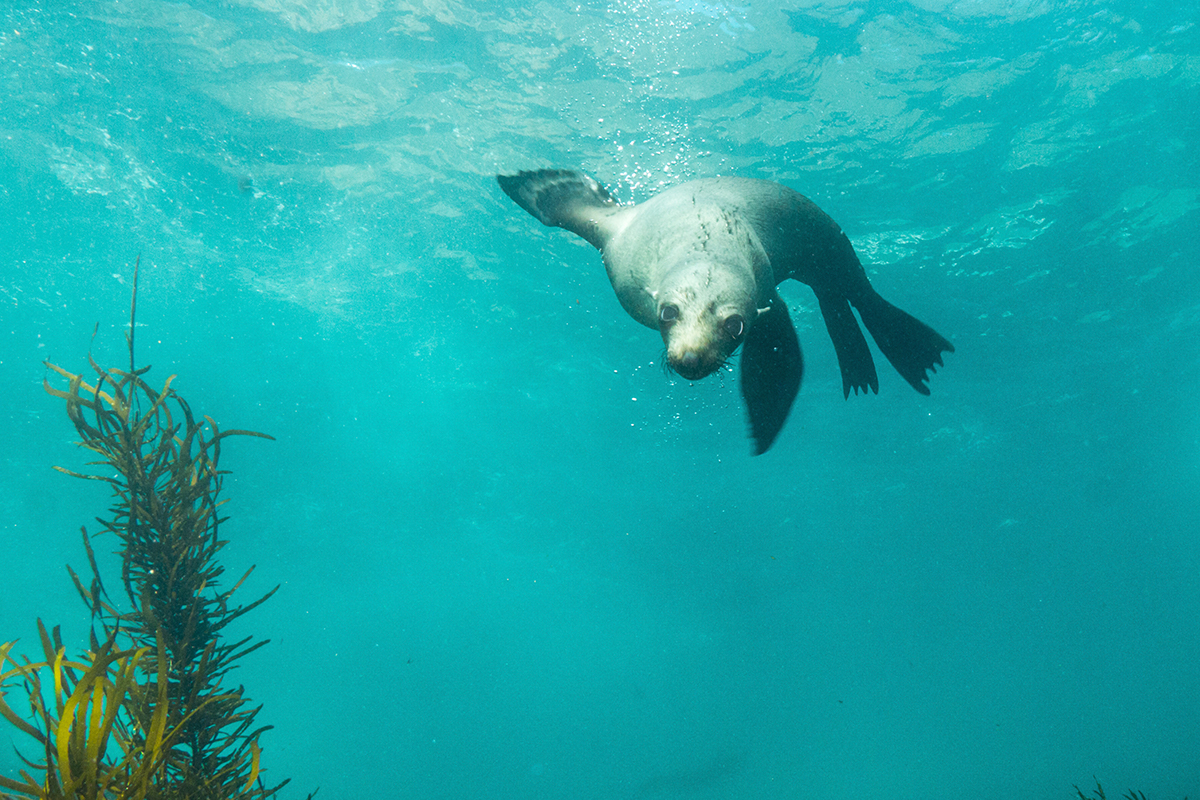 If you are keen to see southern right whales and dolphin pods, dive into the Governers Island Marine Reserve and explore the caverns and underwater sea mounts.

Cathedral Cave in Waterfall Bay is an enormous cavern (hence the name) with three large openings for easy access. The walls inside the cavern are adorned in vibrant sponges – it’s a must visit site.

Diving around South Australia reveals diverse marine life, including the leafy sea dragon which is spotted under many jetties. Sea lions, seahorses, schooling fish and some phenomenal wrecks are all highlights of this region. 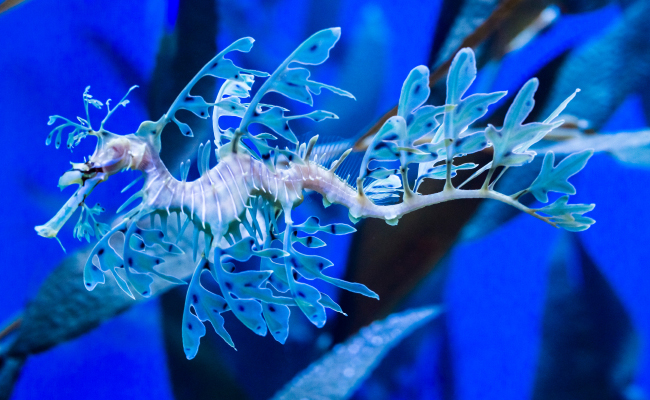 Just a 45 minute drive from Adelaide is the Port Noarlunga Reef which has more than 200 marine plant species and 60 fish species. If you’re hoping to see the leafy sea dragon, check out Rapid Bay Jetty or Second Valley. The ex-HMAS Hobart is an iconic wreck which is still largely in-tact and you can explore the engine rooms, mess decks and gun turrets.

Soak up the sun between dives and explore some of Australia’s most famous dive sites in Western Australia. Rottnest Island, with its 20 bays and 63 beautiful beaches is just as stunning topside as it is below. The incredible soft corals, diverse fish life and abundance of shipwrecks make this an underwater playground which is easily accessible from Perth.

Dive the HMAS Swan – a stunning wreck dive near Dunsborough which was purposefully sunk in 1997 for divers. It’s an accessible wreck with shallow areas for beginners as well as deeper penetration points.

If you’re hoping to see some seriously big fish, head to Exmouth and Ningaloo Reef where it’s possible to encounter whale sharks. All in all, Western Australia is hard to beat and offers something for everyone.

Australia’s Northern Territory is the ultimate destination for those who love the outdoors and nature. Underwater, the coral reefs off Darwin have a rich diversity of reef fish and invertebrates as well as numerous ship and plane wrecks from World War II.

The USAT Meigs is a 131 metre (429 ft) long US transport ship that sank during the first Japanese air raid on Darwin during WWI. The wreck sits in 18 metres (60 ft) of water and is popular with all level of divers. It’s home to a variety of marine life, including pygmy barracudas and golden snappers.

The Gove Peninsula at the north-eastern corner of Arnhem Land is where it’s possible to spot manta rays, reef sharks, turtles, schools of pelagic fish and even whale sharks at certain times of the year.

The diversity of reefy and marine life which Australia offers makes it a must dive area – and no matter where you choose to dive, you’ll find sites for beginners through to even the most seasoned of divers.

Want to learn more about diving in Australia? Visit our Vacation Spotlight or speak with a PADI Dive Shop today.