Baa Atoll: The Largest Manta Ray Aggregation in the World

Just north of Ari Atoll in the Maldives, tiny Baa Atoll is a paradise for scuba divers and manta rays alike. On the edge of the open ocean above a gaping channel, this atoll enjoys a geographical location unlike any other around the world. Here, hundreds of manta rays and whale sharks gather each and every year to take advantage of the zooplankton trapped in the atoll’s bays.

From June to November, snorkelers and divers can experience manta ray feeding frenzies in Baa Atoll. Orderly feeding rituals are forgotten in the mad dash to consume as much plankton as possible. Either exhibiting a cyclone feeding behavior or bumping into each other without concern, the manta rays put on a spectacle for watching tourists.

More than 1600 individuals have been identified in Baa Atoll. That’s more than 40% of the Maldivian population of manta rays. A few whale sharks join in the action, making Baa Atoll one of the best destinations in the world for swimming with marine megafauna.

Like sharks, manta rays belong to the elasmobranch group. They’ve existed for about 5 million years and are closely related to other rays you find throughout the ocean. Their body is flattened, giving them the name “flat sharks.” While some rays live along the bottom of the sea, manta rays have developed the ability to move within the water column using their elegant, wing-like pectoral fins as if they are flying.

Both species of manta ray feed on plankton, so instead of teeth, they use their gills to filter the microscopic food from the water. In addition, manta rays are believed to live 40 to 50 years in the wild, but more research needs to be completed on these magnificent megafauna.

With the diverse marine life around its reefs, thilas, overhangs and swim throughs, Baa Atoll deserves the underwater tourism it receives.

Located just north of Ari Atoll, this section of the Maldives sits along the open ocean above a gaping channel. This position allows Baa Atoll to be one of the best areas in the country for spotting marine megafauna, like manta rays and whale sharks.

Only 13 of the atoll’s 75 islands are inhabited, leaving plenty of room for exploration. Thanks to the lure of the local marine life, several of these islands boast dive resorts and many liveaboards visit the atoll regularly.

In addition to manta rays and whale sharks, Baa Atoll is well known for its wooden, lacquered handicrafts and woven feyli – a type of cotton sarong. You can visit the islands where these products are made, which may provide a break from the hours you’ll spend snorkeling with manta rays in this magical destination.

The entirety of Baa Atoll was awarded UNESCO World Biosphere Reserve status in 2011. This designation was given in part thanks to the unique and important environment found within these 75 islands. The atoll supports one of the largest groups of coral reefs in the Indian Ocean and the world over. This rare environment serves as a transportation hub for planktonic larvae of reef organisms from both the western and eastern Indian Ocean. Because of this, Baa Atoll boasts significant biodiversity.

Not only does Baa Atoll feature a long list of marine species within its boundaries, it’s also an excellent example of human interaction with the natural environment. For generations, local Maldivians have benefited from the bounty of the ocean without putting undue pressure on the area’s biodiversity. In addition, Baa Atoll has strived towards sustainable development with much of today’s tourism infrastructure demonstrating green theories in action. Today, UNESCO, the Maldivian government, locals and conservation groups ensure future development and tourism pressure won’t negatively impact the 1200 reef species (including the manta rays and whale sharks) that call Baa Atoll home.

The Best Time to Go

However, because of its geographical location along the northwestern part of the Maldives, Baa Atoll is positioned perfectly to trap a concentration of plankton when the southwest monsoon dominates weather patterns. From June to November zooplankton is funneled into the atoll, attracting hundreds of manta rays and whale sharks. Therefore, January to May might be the best time to visit the Maldives as a whole, but June to November are the best months for seeing megafauna in Baa Atoll. 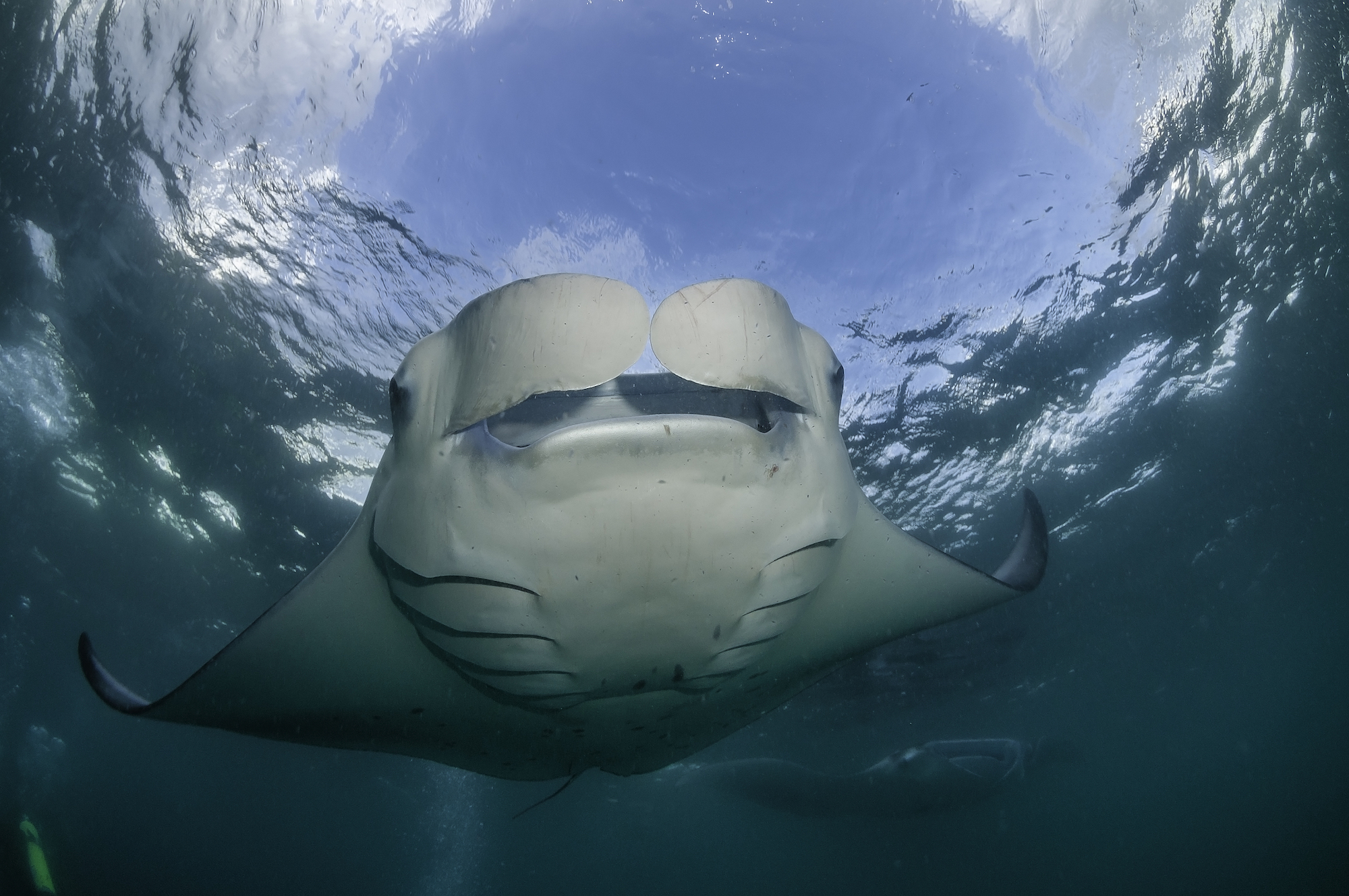 Manta rays can be found throughout Baa Atoll. During the aggregation, the most megafauna (and tourists) can be found in Hanifaru Bay, but scuba divers shouldn’t limit themselves to this famous destination.

The location of Hanifaru Bay along with the shape and morphology of this body of water creates a tremendous concentration of plankton. Zooplankton is funneled into the bay, attracting hundreds of manta rays and a few whale sharks.

This is the most famous spot in Baa Atoll for good reason. Imagine snorkeling amongst dozens of huge manta rays and whale sharks. The feeding frenzy adds to the excitement of the trip. In fact, during the manta ray aggregation, megafauna is sometimes spotted cyclone feeding, a unique community-driven behavior.

On the other hand, Hanifaru Bay is incredibly popular and can get busy with tourists trying to take part in the aggregation. In addition, the Bay is highly regulated. In particular, time restrictions are set for every visitor, and scuba diving is banned. If you’re certified, don’t miss a day trip to Hanifaru Bay, but take time to look elsewhere for the manta rays, too.

Part of the protected reef of Baa Atoll, Horubadhoo Thila is a submerged island at a depth of 39 to 52 feet (12 to 16 meters). Covered in hard and soft coral, this area is home to macro life and large pelagic creatures. From May to November, manta rays use Horubadhoo Thila as a cleaning station.

To the southeast of the atoll lies Nelivaru Haa. Here you’ll find star-shaped canyons and coral-covered overhangs on the walls of the reef. Stingrays, big groupers, batfish and oriental sweetlips like to hang out at Nelivaru Haa. Plus, the entire reef becomes a cleaning station during manta season.

Dhonfanu Thila starts at 26 feet (8 meters) and features a narrow swim-through lined with black coral at 82 feet (25 meters). As you descend to the swim-through, you might see manta rays passing by. You can also expect to see lots of other fish, including redtoothed triggers, black pyramid butterflyfish, parrotfish, angelfish and starry rabbitfish. 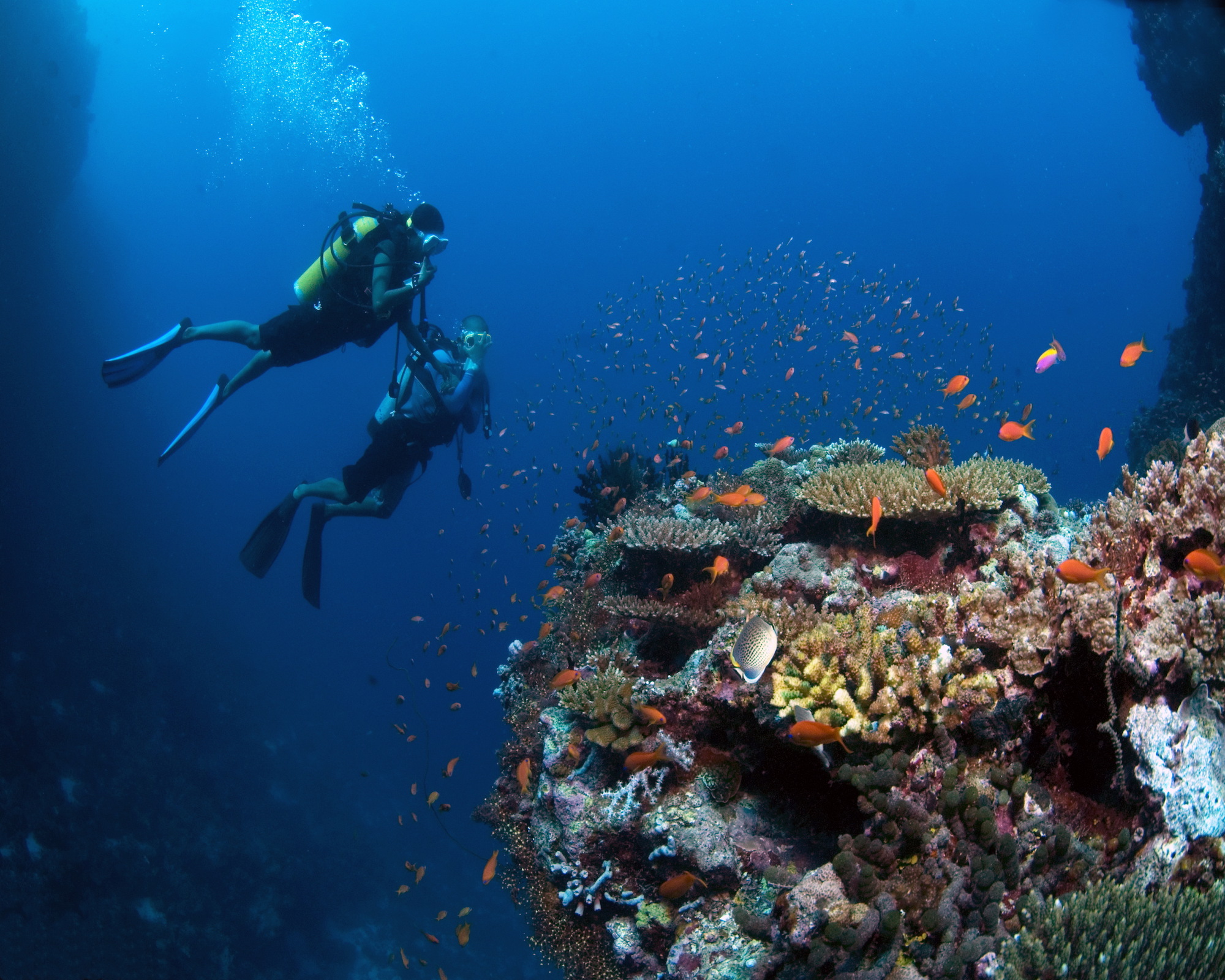 How to Dive in Baa Atoll

Now that we’ve discussed the best spots for swimming with manta rays and diving in Baa Atoll, you probably want to know the best places to stay for these interactions. To access the best spots, you’ll want to stay at either a dive resort or travel by liveaboard. Luckily, there are several good options.

Thanks to sustainable development, Baa Atoll features a number of dive resorts that work to show off the area’s manta rays while implementing important conservation programs. Supporting one of these dive resorts during your trip to Baa Atoll allows you to enjoy the area and protect it at the same time.

View All Dive Resorts in the Maldives

Although Baa Atoll is well developed, it’s a popular destination for liveaboards. If you want to combine a trip to Baa Atoll with diving elsewhere in the Maldives, book a liveaboard and experience the scuba diving vacation of a lifetime.

View All Liveaboards in the Maldives

The Best Guesthouses in Baa Atoll

Over the past five years, local island guesthouses have been cropping up throughout the Maldives at an extraordinary rate, as well in Baa Atoll. And although they’ll never be comparable to the backpacker prices of other parts of Southeast Asia, the rates are extremely competitive relative to the resort market, with some charging as little as $40 US per room per night. Naturally, the quality you’ll find varies from place to place. Although these local island establishments are collectively referred to as ‘guesthouses’ in the Maldivian tourism industry, some would be better described as boutique hotels, with spacious rooms, in-house restaurants serving top-notch food, with a handful even having their own pools.

Are you ready to dive into Baa Atoll? Contact PADI Travel today to book the manta ray vacation of a lifetime.