Plankton: The Ghosts of the Ocean

With Halloween fast approaching, it’s the perfect time to shine a spotlight on the real ghosts of the ocean… plankton! This highly diverse and abundant group of mostly microscopic organisms is ever-present in the underwater world we love, despite the fact that while we’re exploring the ocean we almost don’t even know they’re there. To add to their ghost-like characteristics, most plankton are somewhat transparent, and the opportunity to see plankton in detail, whether through a camera lens, or a microscope, provides an experience that can definitely feel other worldly. The most amazing thing of all about plankton is how vitally important they are to the health of the ocean and the planet.

The word plankton comes from the Greek word “planktos” meaning wanderer or drifter. While many species of plankton are capable of independent movement, all plankton are primarily at the mercy of the ocean currents.

In becoming better acquainted with these itty bitty ghosts of the ocean, it’s highly important to note that there are two main groups of plankton: Phytoplankton and Zooplankton. Just like we have plants and animals on land, typically it’s most straightforward to think of phytoplankton as ‘plant plankton’ and zooplankton as ‘animal plankton’.

Phytoplankton are technically microscopic algae, not plants, but the important similarity is that they get their energy from the sun via photosynthesis and thus give off oxygen. Some of the most abundant and diverse groups of phytoplankton found throughout the global ocean are diatoms, dinoflagellates, and cyanobacteria (including one species called prochlorococcus which is the most abundant photosynthetic organism on the planet). Like plants on land, phytoplankton species come in an incredible variety of intricate shapes and dazzling colors. We just can’t quite see them with our naked eye. 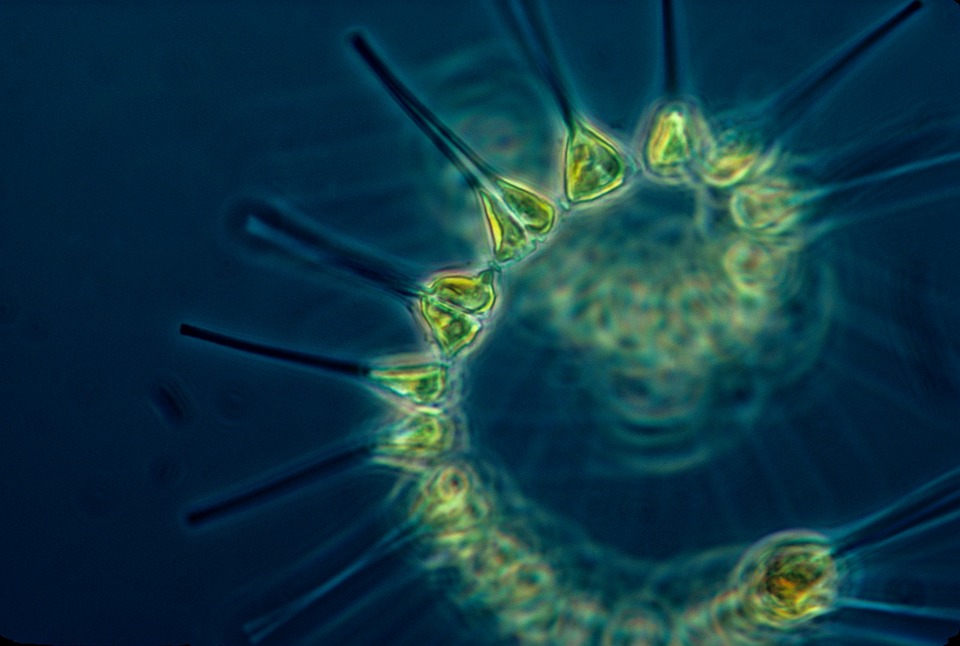 Zooplankton fall into two distinct categories: holoplankton and meroplankton. Holoplankton spend their entire life cycle as plankton, while meroplankton are animals that are only planktonic for part of their lives (typically the larval stage) and then grow up into larger marine organisms. Primary examples of holoplankton include planktonic crustaceans like copepods, amphipods, and krill that stay teeny tiny their whole lives. Primary examples of meroplankton include the larvae of bottom-dwelling animals like sea urchins, crabs, and lobsters, as well as most fish species – from flounders to eels to swordfish.

Exhale… Now say, “Thank you phytoplankton!”. With approximately 50% of the oxygen in Earth’s atmosphere being produced by phytoplankton, anyone that likes to breathe has a lot to be thankful for when it comes to these microscopic marine algae.

“With every drop of water you drink, every breath you take, you’re connected to the sea. No matter where on Earth you live.” – Dr. Sylvia Earle, Founder of Mission Blue

Phytoplankton and zooplankton both play incredibly important roles in a healthy ocean since they are the foundational organisms of the global marine food web. Every single animal you see while scuba diving is dependent, either directly or indirectly, on plankton for food. Even some of the largest ocean animals feed directly on plankton, like blue whales, manta rays, and whale sharks, to name a few. And of course smaller organisms like corals, seahorses, and barnacles also feed directly on plankton.

Want to get up close and personal with this ghostly plankton world? Then blackwater diving might just be for you! A blackwater dive is a night dive that takes place several miles offshore in typically very deep open ocean, with the intention of observing the myriad of awe-inspiring zooplankton that migrate to the surface each night. Zooplankton migrate from the depths of the big blue up to the surface waters every single night in what is known as the ‘Diel Vertical Migration’ – the greatest migration in the world in terms of biomass. While phytoplankton always remain near the surface due to their dependency on sunlight, zooplankton ‘hide’ in the darker depths of the ocean during the day to avoid predation, and then migrate up to the surface at night to feed.

This makes for a truly spectacular show for blackwater divers and photographers like Susan and Jim Mears (Mears Photo) who regularly capture images and videos of plankton during their blackwater dives off the coast of Florida.

“Blackwater diving is always new and challenging. Imagine trying to maintain buoyancy while trying to focus on a fast moving light sensitive creature in the open ocean that is the size of a grain of rice. And there is always the possibility of photographing something that has never been photographed alive before. It’s what keeps us coming back for more. Can’t wait for the next dive as soon as we are back onboard.” – Susan Mears

While divers remain relatively shallow during a blackwater dive, the bottom is usually hundreds or thousands of feet below, so good buoyancy skills are an absolute must. For those divers interested in trying out blackwater diving, we highly recommend the PADI Peak Performance Buoyancy Specialty and Night Diver Specialty certifications.

Whether it’s a blackwater dive or not, next time you slip beneath the surface of the ocean, especially around Halloween time, think of the microscopic and ghostly world of plankton all around you, and the vital role they play in sustaining a healthy ocean and planet.