New PADI Diver Cards and the Stories Behind Each Photo

Has it been awhile since you updated your PADI Diver card? If you need to update the photo, or simply want a spare card, check out our new options for 2014. We have three exciting underwater images featuring the big creatures and unforgettable experiences divers dream about.

Check out the images below, and read the story behind each shot – as told to us by photographer Stephen Frink. 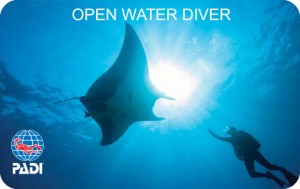 The story behind the shot:
The Revillagigedos Archipelago ( including Socorro Island) is about 400 kilometres/250 miles south of Cabo San Lucas, Mexico in the eastern Pacific Ocean. Here the big attraction is the friendly interaction with giant manta rays. Unlike so many places in the world where mantas are glimpsed only in the distance, here, friendly close-up interactions with giant manta rays typically occur in generally outstanding water clarity .

In the Socorros, mantas actually seem attracted to divers and their bubbles. It’s common of see giant mantas hover over divers, as if enjoying the exhaust bubbles percolating across their bellies. With a single flap of their wings,mantas can easily outdistance even the fastest scuba diver, so I can only assume there is some benign interaction here. If synergistic, I can’t imagine what the mantas get out of it but, for me, it’s a very inspirational photo opportunity. 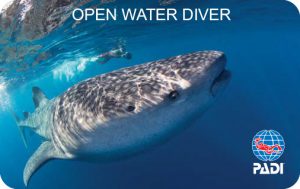 The story behind the shot:
Until recently, it was quite rare to encounter a whale shark in the wild. With today’s easy communication, the underwater photographic community shares information about where and when these gentle planktivorous giants are likely to be in residence The world’s largest aggregation of whale sharks is now found off Isla Mujares, Mexico, where they congregate by the hundreds to feed on fish eggs . Although people speculate that amazing gathering has been going on for years, snorkelers now flock there during whale shark season .

To be in close proximity to dozens of whale sharks is a thrilling experience. Even when they seem to be moving effortlessly, they are quite rapid – especially when compared to a swimmer pushing a bulky DSLR camera and housing. The challenge is to get a little ahead of the whale shark so you can capture the cavernous maw as it filters masses of seawater to extract the plankton and fish spawn. In this case, a snorkeler in the background provides the proper scale to illustrate a whale shark’s sheer size and majesty . 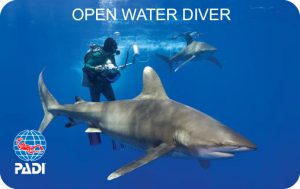 The story behind the shot:
Off Cat Island in the Bahamas, I’d heard that mahi mahi anglers were having a hard time pulling up anything but a partial fish because the sharks were eating them while still on the lines. The suggested a productive photo opportunity!

We traveled there in early May, the most active time for oceanic whitetip sharks according to local knowledge. We jumped into the spectacular indigo blue water that defines the dive experience in the southern Bahamas With open water diving – especially in visibility exceeding 45 metres/150 feet – there is something a little unnerving. The bottom is much too deep to retrieve anything you drop and, when when you add sharks to the mix, the lack of coral heads or shipwrecks to back up against is noticeable. The sharks have a 360-degree field of approach so you need constant situational awareness to monitor which sharks are where. It helps to have a fellow photographer point out those sneaking up behind you and this is what this photo captures. As I turn to look over my left shoulder, I’m just in time to ready myself for yet another near pass by this majestic pelagic predator.

To order a replacement PADI card featuring one of these great images, visit our website.