Documenting Arctic Giants in the Fjords of Northern Norway – Part One

PADI AmbassaDiver™, Birgitta Mueck, dives deep into the fjords of Northern Norway, chasing the large pods of orca and humpback whales that migrate there over winter…

Carefully, I slipped into the 3°C Arctic water. It was the second week of January, and the sun hadn’t risen above the horizon for more than a month. The lack of light gave the entire underwater environment a dark and gloomy quality. I felt the bite of cold water as I slowly snorkeled into the dim, blue-gray surrounding. With camera in hand, I slowed my movements as a gigantic shadow gradually appeared in front of me. Slowly, it got even closer. Adrenaline rushed through my entire body as the majestic black and white creature gracefully passed within a meter of me. My happiness was totally overwhelming, I was back to what I love so much: Back in the water with the Norwegian orcas! 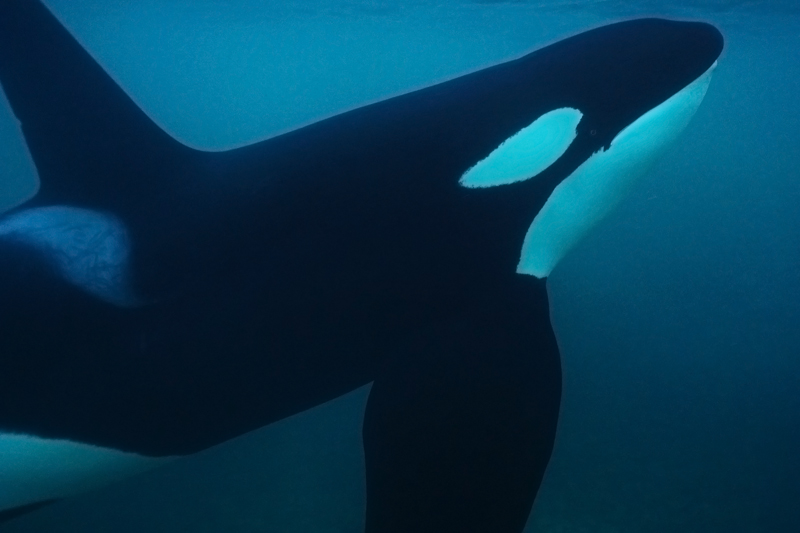 The water was shallow so the sandy bottom was quickly stirred up by the whale’s powerful movements. Despite his massive size there was no doubt that the whale has total control over his body and movements. He was there with his pod. I silently stayed where I was, just beneath the surface, leaving the decision to the whales whether they want to approach me or not. The mothers and young kept their distance, leaving it to the big guys to be curious about me. And curious they were, especially the one who’d already approached me. He kept coming back. Through the poor visibility I could see how he stunned herring with a single, yet powerful, tail-slap before eating the fish one by one. After doing so, he swam up close, inspecting me with a curious eye. In his majestic company I stayed completely calm and silent, hardly moving. Whilst I recorded everything on camera, this encounter not only created a big cloud of sand around me, but also an immense cloud of happiness within me.

Our adventure started in the beginning of September, when we set off from Orust, Sweden on a 1,300 nautical mile journey to the fjords of Northern Norway. Our aim was to dive with, and film, marine life along the Norwegian coast. Ultimately we’d reach the Arctic giants; orcas and humpback whales, which have been gathering in the fjords of Troms, in Northern Norway, every winter for several years in a row now. After close to two months on the move, (including several amazing dives along the way) we finally reached the picturesque northern part of Norway at the end of October. Here, we found out that fewer herring has shown up in the fjords than previous years. As herring are the reason so many whales have been gathering here, it wasn’t good news. We knew this amazing wildlife phenomena is a limited one as the whales change their migration pattern due to the availability of their food source; herring. Would less fish in the fjords mean an end of the winter whale migration already?

Happily, it didn’t take long before we encountered our first orcas. To start with there were a few small pods. Then, a couple of days later, we found ourselves surrounded by orcas everywhere! These intelligent animals are very curious and, when not busy feeding, it wasn’t unusual for them to swim up to our sailboat for a closer look. While some tail slap, others spyhop, and in some very few but lucky moments, we even witnessed them breaching! To see those magnificent mammals in their natural environment is pure magic to me. Ever since my first orca encounter in 1995, I’ve felt a strong bond to these amazing creatures. These social animals normally live in the same family group all their life, traveling long distances in the vast ocean. When I saw the numbers of orcas that surround our boat and, one after the other, curiously look up at us with their big heads, I wished I could share the experience with everyone. This is the way, I believe, all life should be experienced; wild, free and under their own terms. Though excited about the large numbers of orcas in the area, I still wondered if we would be lucky enough to also have encounters with humpback whales. This season there hadn’t been many humpacks showing up in the fjords so far…

Read on for part two.