Scuba diving is obviously an incredible way for humans to observe and explore the underwater world. For ocean scientists, scuba diving is often essential to being able to observe and study the complex dynamics found beneath the surface. Using diving for science allows for a better understanding of the ocean, which ultimately helps us to better protect and conserve our blue planet. We’re ‘diving into ocean science’ with these three inspiring marine scientists that regularly use scuba diving for their research in all different parts of the world.

Dr. Lauren Toth is a coral reef ecologist that actively uses scuba diving in order to study the fossil record of coral reefs around the world. She first studied Marine Biology at University of Miami as an undergrad, and then went on to earn her PhD at Florida Institute of Technology. Currently, she is a Research Oceanographer at the United States Geological Survey Coastal and Marine Science Center in St. Petersburg, Florida. Lauren is passionate about sharing ocean science with the public, and has even co-founded Youth Making Ripples – an ocean science film competition for K-12 students.

Question: What has been the primary focus of your coral reef research over the last ten years?

Lauren: My research uses geological records of coral-reef development to gather clues about past environments and their influence on the health of coral-reef ecosystems in the past, present, and future. Most of my research is focused on collecting and analyzing coral-reef cores, which provide histories of reef growth, ecology, climate, and sea level extending back thousands of years. I believe that the insights from the geological records can provide important clues that can help us understand the modern decline of reefs and to predict what we may expect of reefs in the future. More recently, I have begun geological investigations of modern reefs to determine the growth rates of key coral species, where and how fast degraded reefs are eroding away, and how the balance between coral growth and erosion is affecting habitat availability.

Question: In what ways do you use scuba diving to conduct your research?

Lauren: Scuba diving is central to my research. When we’re collecting coral-reef cores, my research team and I spend the daylight hours of every day underwater drilling into the reef structure. We also pair the historical data with modern studies, where we dive to evaluate the health of the reef using videographic or photographic surveys, collecting corals from the reef to measure growth, or counting fish.

Question: What are the big-picture implications of your coral reef research, now and into the future?

Lauren: My research has shown that climate is a central control on coral-reef development over scales of decades to centuries. For reefs that exist at the environmental limits for reef growth—places like the tropical eastern Pacific and Florida—climatic changes in the past have caused shutdown of reef growth that have lasted thousands of years. Climate has also been a major cause of the recent declines in coral populations. In many locations, like south Florida, those declines have let the reefs vulnerable to erosion, threatening the persistence of the geological structures that took thousands of years to build. I also think, though, that there is a lot of hope in the geologic history of reefs. Coral reefs have been around for hundreds of millions of years and in that time they have endured dramatic changes in the environment. Although reefs have been knocked back many times in the past, they have always come back. This gives me hope that if we can address the threats they’re currently facing they will come back again. 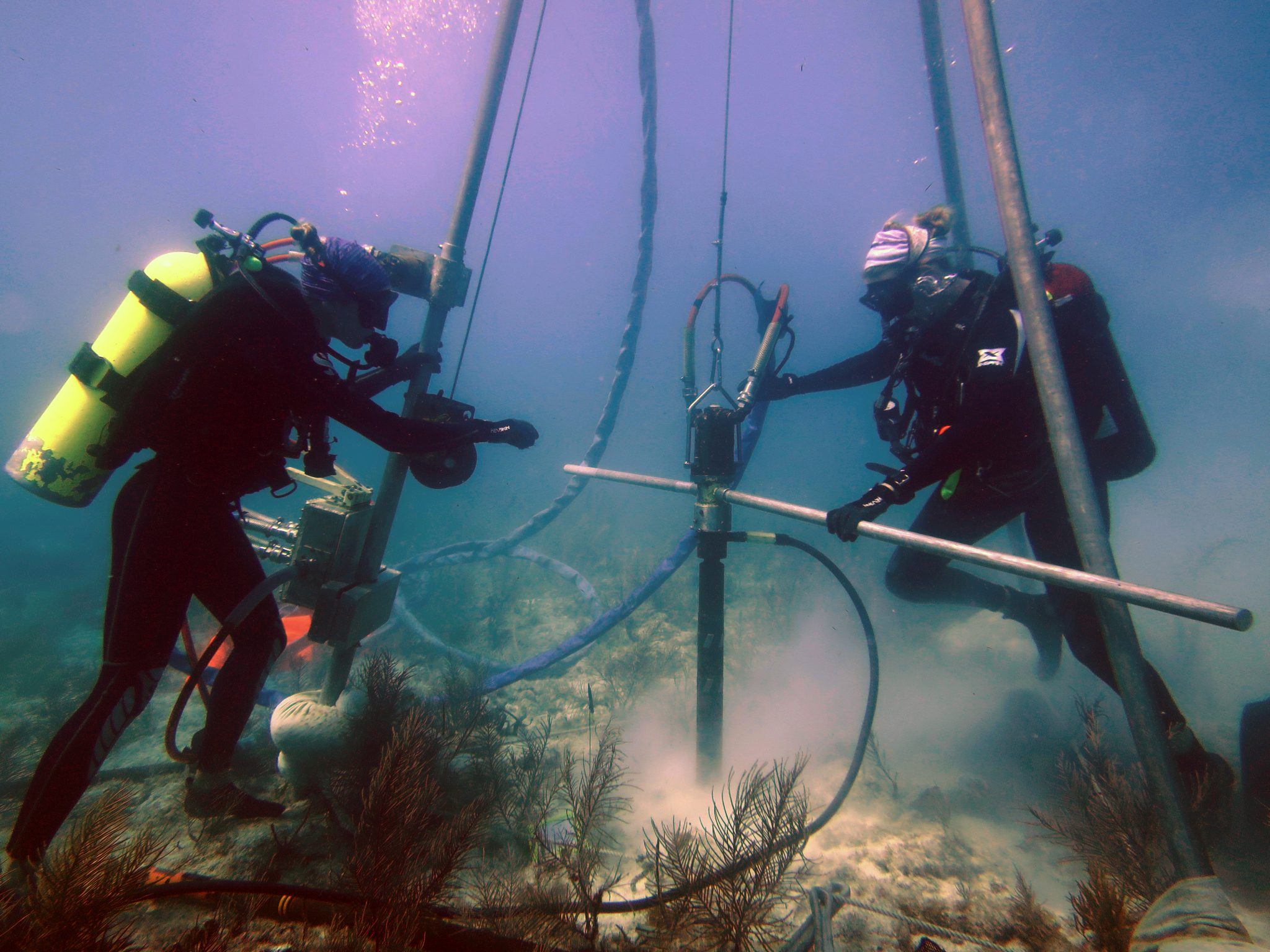 Dr. Lauren Toth and a colleague using scuba to collect a coral reef core in the Florida Keys. These cores are used to study the fossil record of coral reefs.

Susann Rossbach is a marine biology researcher and PhD candidate at the Red Sea Research Center of King Abdullah University of Science and Technology in Saudi Arabia. During her current thesis project, she is actively using scuba diving to study the physiology and ecology of giant clams in the face of global climate change. Prior to starting her PhD, she earned her Master’s Degree in Biological Oceanography, studying cold-water coral species. Susann actively shares about her scientific diving and marine research on Instagram @scientificdiver.

Question: What is your primary research focus during your PhD?

Susann: As a PhD candidate in Marine Science at King Abdullah University of Science and Technology in Saudi Arabia, I am examining the ecology of Tridacna giant clams here in the Red Sea. As they are photosymbiotic, meaning they live in a symbiosis with tiny unicellular algae (just like corals do), they mostly rely on sunlight for their energy. This is why my research mostly focuses on the impact of light (e.g. their growth and behavior but also their abundances in the field as well as specifically the impact of UV radiation) on these charismatic bivalves.

Question: In what ways do you use scuba diving to conduct your research in the Red Sea?

Susann: Of course I need diving for my own research – when I have to conduct transects (in which I count the abundance of the clams in a defined area) or when I have to collect tissue samples for my experiments. But as a scientific diver I also regularly join other scientists for their fieldwork and help them with their tasks underwater. That can be quite broad – from collecting specimens, to surveying fish, coral and seagrass abundances, to deploying oceanographic equipment and building setups for experiments underwater.

Question: What inspires you to share your research and scientific diving adventures with the world on social media?

Susann: Although, among STEM disciplines, Marine Biology has quite a high ratio of female scientists (and a high number of them are diving), scientific diving itself is a quite male dominated field. So, initially I started to share my story as I wanted to show that there are also female professional scientific divers. Over the years I realized that people (not only fellow marine biologists, but also from completely different fields) are also interested in the research I am doing and want to know more about marine organisms in general. It’s super nice when I share some of these facts with my followers and get comments like ‘this is so cool! I didn’t know that’, because I truly think – you only love and protect what you know. But besides that, talking about my research on social media also brought me into contact with many other marine scientists – a few times already I even had the chance to meet some of them in real life (in workshops, conference, etc.).

Susann Rossbach and a colleague using scuba to collect data about the physiology and ecology of giant clams among coral reefs in the Red Sea.

Margaret ‘Maggie’ Amsler is a marine benthic ecologist that has been actively using scuba diving to study Antarctica’s underwater marine life and ecosystems for more than three decades. She has completed more than 500 dives in the frigid Antarctic waters – studying krill, chemical ecology, and ocean acidification. Maggie and her husband, Charles ‘Chuck’ Amsler, are long-time researchers at University of Alabama at Birmingham. In 2007, Amsler Island was officially named in recognition of their immense contributions to advancing Antarctic research science.

Question: What has your research in Antarctica primarily focused on over the last 35 years?

Maggie: I feel like I have had two Antarctic research careers. My first twelve years focused on the most marvelous pelagic invertebrate to ever swim the Southern Ocean, the Antarctic krill – Euphausia superba. The research encompassed various aspects of its life history including physiology and reproduction. The objective was to understand how this two inch long shrimp-like crustacean, that is effectively a vegetarian, is so successful and abundant in such a light limited cold environment and up against enormous predation stress. I have since ‘settled down’ and now study the ecology of benthic shallow water communities along the Western Antarctic Peninsula which are richly diverse and lush. Literal forests of large brown macroalgae stand canopy-like over shrubbier red algae carpeting the rocky subtidal. Think California kelp forest biomass – only colder. Multitudes of attached sponges, tunicates, bryozoans populate the seascape. This chemical ecology work focuses on how attached organisms protect and defend themselves from grazers like the commonly abundant amphipods and snails. It all boils down to chemistry. Most of the Antarctic macroalgae produce species-unique chemicals, secondary metabolites, to make them taste bad to grazers. Sponges and tunicates produce secondary metabolites to keep their surface free of fouling organisms or repel surface feeding critters like seastars. This chemical warfare shapes, develops and presumably maintains the ecology of polar communities and contributes to understanding chemical ecological driven processes in more temperate environments.

Question: In what ways has scuba diving been an integral part of conducting your research?

Maggie: Diving during my krill days was essential to studying krill biology in the winter. Towing gear through the annual sea ice is not advised for fear of losing sampling nets. So dry suited divers would tether up and swim underneath ice floes to collect, by hand, krill associating with the ice. Diving has been instrumental for the chemical ecology work also. Seeing the communities first hand and observing interactions between species has truly directed the research.

Question: What are some of your favorite aspects about getting to dive in Antarctica to better understand the underwater world?

Maggie: Certainly one of the most remarkable aspects of diving in Antarctica is the privilege of seeing communities rarely, if ever observed by other divers. It is hard to appreciate what is not seen and diving allows glimpses into another but vitally important region of Planet Earth. Divers in general I believe serve as ambassadors of the underwater world by extolling its beauty and promoting its protection. Antarctic diving for me is so cool that way because I can share with others, through outreach like this, the wonders of not only what I see above water but also below water and in doing so hopefully foster and enhance a deeper (no pun intended) appreciation of Antarctica’s richly unique and fragile environment. 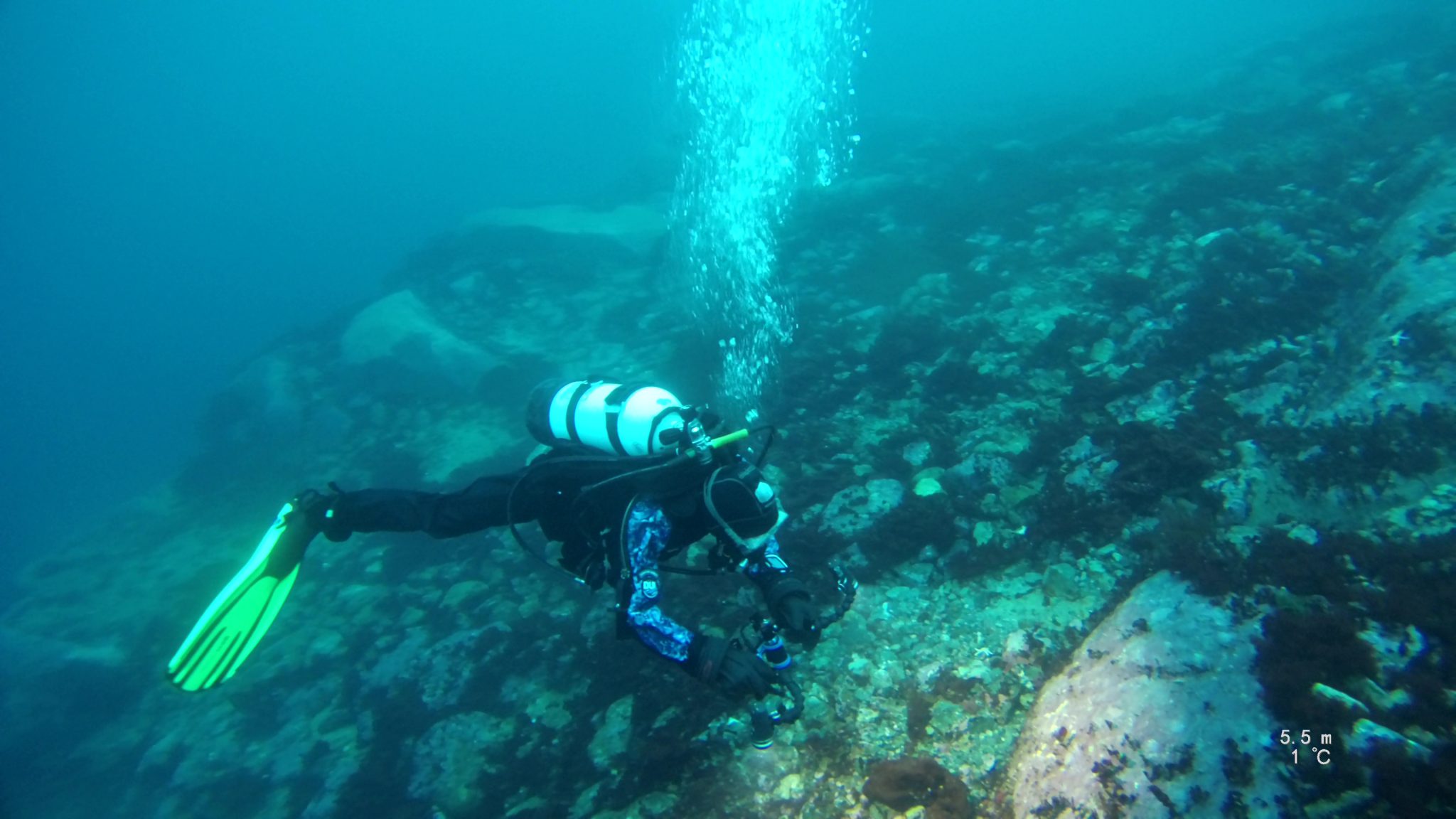 Want to feel a bit more like a marine biologist on your next dive? The PADI Underwater Naturalist and Fish Identification certifications will give you a peak inside the world of ocean science. Want to actually contribute to ocean science research? Find a citizen science initiative in your local area that needs the help of scuba divers – and get involved. Similarly to Lauren, Susann, and Maggie, we can all play an important role in better understanding, and ultimately protecting, our ocean planet.