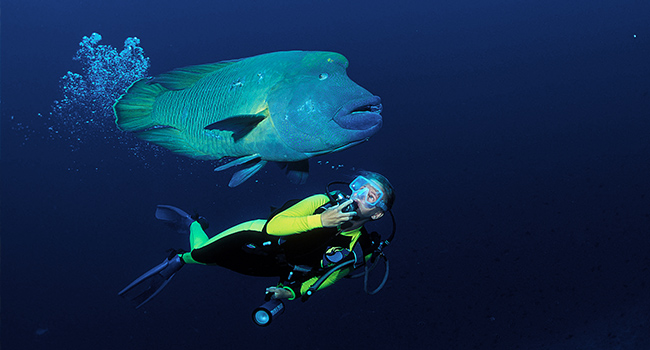 The humphead wrasse (Cheilinus undulates), commonly referred to as the Napoleon wrasse, Maori wrasse, or Napoleon fish, can be found hanging around coral reefs in the Indo-Pacific Oceans “from the Red Sea and the coast of East Africa to the central Pacific, south from Japan to New Caledonia”. Most people can easily recognize this fish because of the renowned bump on its forehead and trademark big lips. Exhibiting shades of green, blue, and even purple, the humphead wrasse can be as colorful as it is large.

If you’ve been fortunate enough to see one in person, the experience will be unforgettable.

Here are 6 interesting facts about this colossal fish:

As far as reef fish go, the humphead wrasse is one of the largest. Females can grow up to 3 feet/1 metre long with their male counterparts reaching twice that and weighing as much as 400 lbs/181 kgs!

Their lifespan is not as long as a tortoise’s, but it’s a REALLY long time for a fish. These fish can live for over 30 years (some sources even say 50) with females outliving males.

The humphead wrasse does not reach sexual maturity until they are around 4-6 years old. They are protogynous hermaphrodites (as is the entire wrasse family), which means that some fish start out as female and then transition to becoming a male a few years after sexual maturation. The reasons for the transition are still speculative, but scientists believe that it can be prompted by the disappearance of a dominant male.

Though the majority of their diet is comprised of other reef fish, mollusks, sea urchins, and invertebrates, the humphead wrasse can even eat otherwise poisonous species like starfish and boxfish without being affected by their toxins.

Due to a more than 50% decline in population over the last 30 years, the humphead wrasse is listed as an endangered species by the International Union for Conservation of Nature.

Divers love these fish! One of the most well-known humphead wrasses is ‘Wally’ the Wrasse, who you can find living in the Great Barrier Reef, Australia. Wally was born a female and was originally named Sarah until he transitioned to becoming a male at nine years old. He has his own Facebook page and even has a book series named after him!

To increase your knowledge of other amazing fish you could see on your next dive, enroll in the PADI Project AWARE Fish Identification Course. 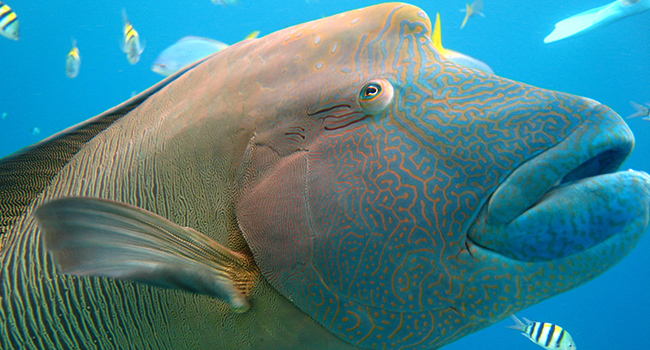 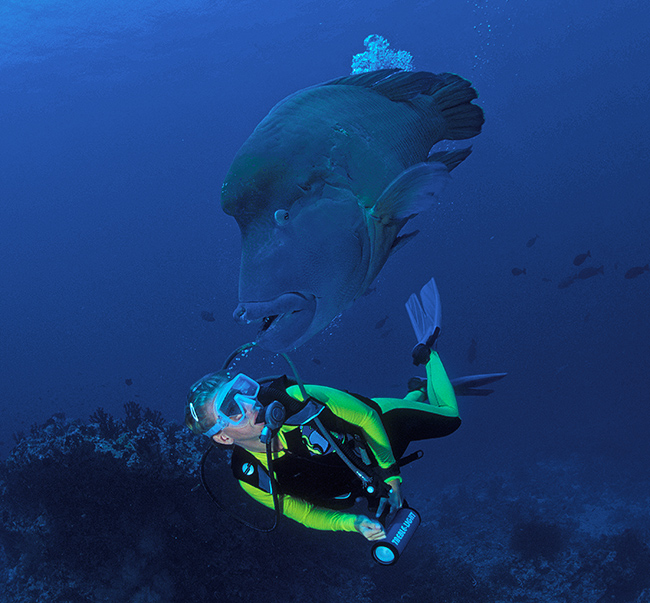