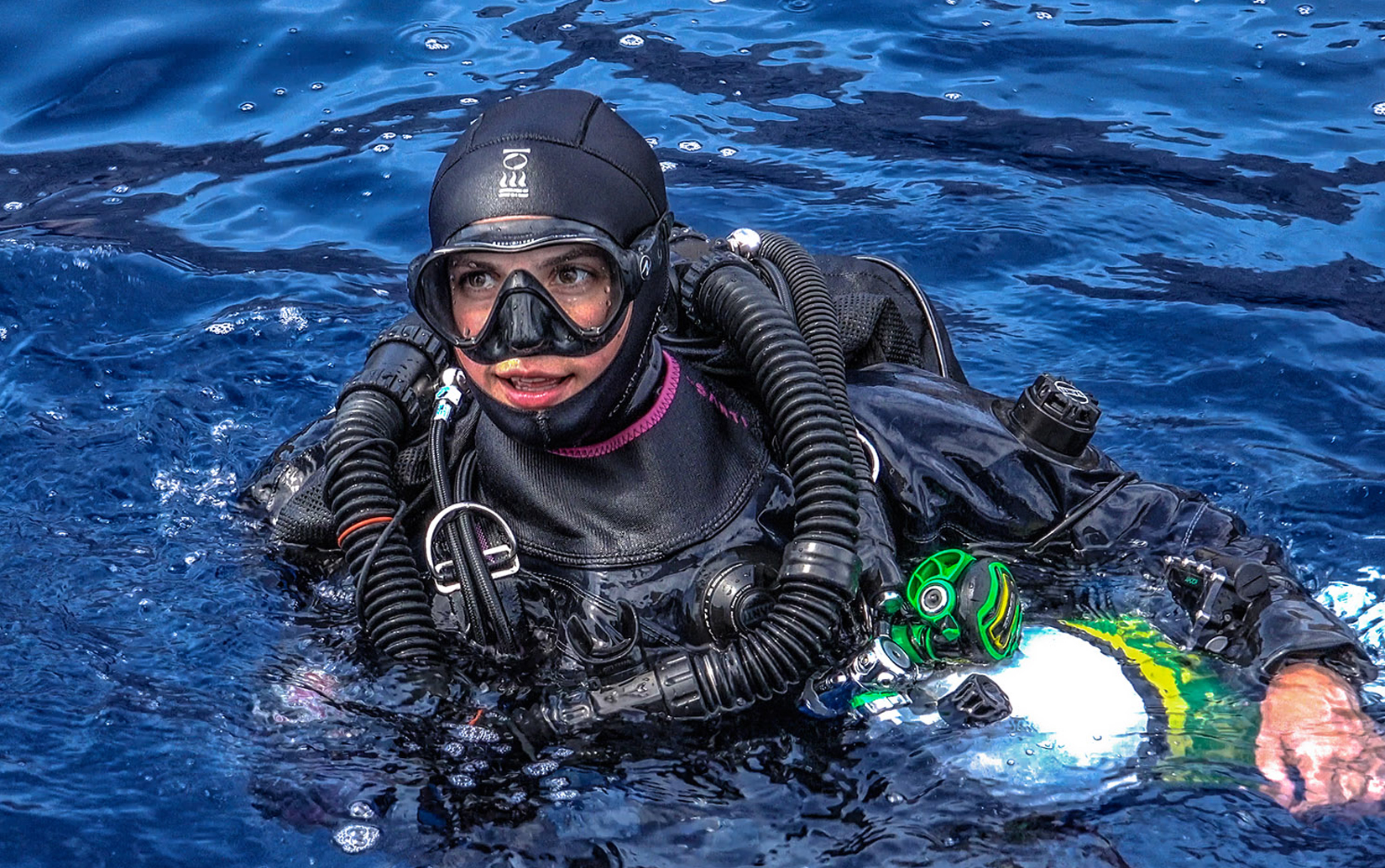 There are many aspects of diving I love, and there are always new adventures to have and new places to see as a diver. This is one of the beauties of the sport. One of the branches of diving which interests me most though, is scientific diving, and in particular underwater archaeology. Both my parents were land archaeologists. So to end up, through my passion for diving, being involved with underwater archaeology has a satisfying feeling of completing a circle; one which began when I was just a child and my Mum would take me along to play in the dirt with a trowel while she worked on her land excavations. Over the last few years I have been lucky enough to be involved with some truly fascinating archaeological projects, and quite possibly one of the most important and famous underwater archaeological excavation ever undertaken; that of the Antikythera Mechanism Shipwreck.

For many decades the tiny and remote Greek island of Antikythera, lying far below the mainland Greek Peloponnese and northwest of Crete, has been known to be home to one of the most significant underwater archaeological sites in the world. It was first come upon in the 1900s by sponge fishermen from the Greek island of Symi, who, having been forced to take shelter from a raging storm on their way back home from their summer fishing grounds in Tunisia decided to try their luck while they waited out the bad weather, and see whether they could add to their haul of sponges. Using the standard diving equipment of the day – canvas suit, heavy copper helmet, and an unwieldy umbilical hose that delivered air to the divers, as well as being their only connection to the world above them – the story goes that a diver by the name of Elias Stadiatis was the first to descend. Minutes later he came back to the surface in a frenzy, shouting of seeing ‘dead bodies, littering the sea floor. Dead bodies everywhere!’ These ‘dead bodies’ would, on further dives, turn out to a huge collection of breathtaking bronze and marble statues, relics from an unknown ship wrecked thousands of years previously, and their discovery would start the beginning of some of the most extraordinary finds of recent times. 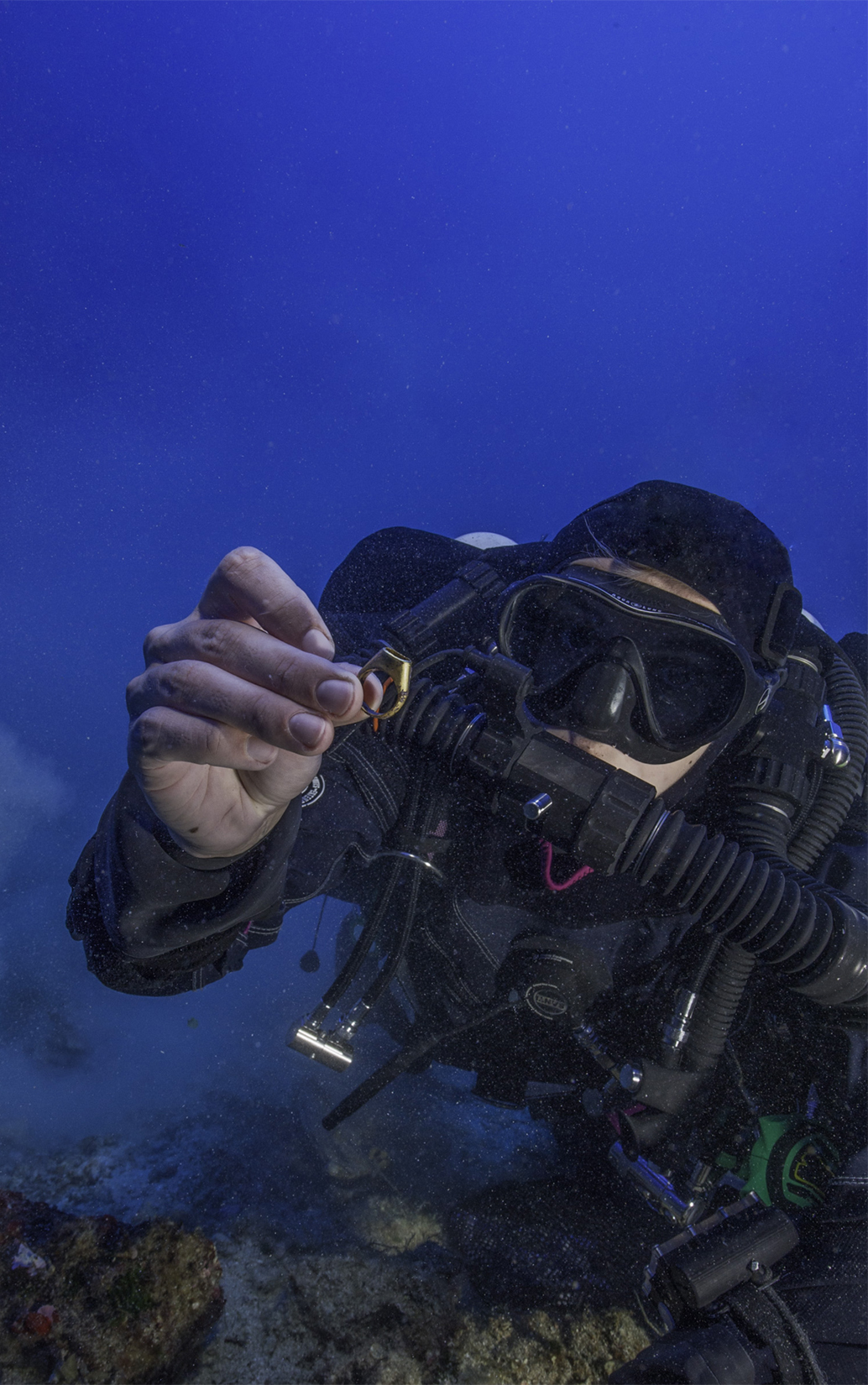 Despite the incredible beauty of the statues found and recovered, the Antikythera wreck is without doubt best known for a device which has come to be known as both the ‘Antikythera Mechanism’ as well as ‘the world’s oldest computer’. Complex interlocking bronze cogs and wheels, cut with total precision and marked with tiny scales and inscriptions were, and still are, unlike anything ever discovered. Most mind-blowing perhaps though is the age of this device. To think that this was made by the Ancient Greeks over 2000 years ago puts it utterly ahead of its time. Until this discovery there had never been another accurate scale, or any cogwheels, found from that long ago era. Opinion is still divided as to its exact use, but nowadays it is thought by experts to predict the movement of the sun, moon, and planets, as well as showing eclipses and the cycles of the ancient Olympic Games.

This wreck site has continued to captivate the imagination of people in the decades since its discovery. The legendary diving pioneers Jacques Cousteau and Frederic Dumas made expeditions to the site in both 1952 and 1976. Although no further pieces of the Antikythera Mechanism were uncovered on this trips, they were able to add to the impressive haul of treasure already recovered from the wreck. However, despite many beautiful finds, and the obvious potential for finding yet more, it would be many years before another archaeological team would return to this site…

Read on for Part Two