Australia’s Southern Queensland is truly a diver’s paradise, offering an incredible array of world-renowned dive sites – from coral cays and bommies on the Great Barrier Reef to shoals and shipwrecks bursting with life. No matter which underwater locations you choose to explore, you’re bound to be surprised and delighted by the abundance and diversity of marine life found here, including several species of whales! With numerous scuba diving locations easily accessible from major cities like Brisbane and Gold Coast, as well as plenty of site options for divers of all skill levels – diving in this region is surely a bucket list essential. Here are six amazing dive locations you won’t want to miss when you visit Southern Queensland.

Venture less than two kilometers (one nautical mile) off of Southern Queensland’s Gold Coast to find this 64 meter (210 foot) iron shipwreck. The most prominent features of the Scottish Prince are the bow and the stern. The shallowest part of the ship is the bow, rising approximately 5 meters (16 feet) off the sandy seafloor. Descend deeper to see that the stern is twisted to the right and the hull is covered with algae, sponges, and corals – a perfect foundation for attracting a wide variety of marine life.

While you explore this historic shipwreck, be on the lookout for massive schools of yellowtail, tropical reef fish like wrasse, pufferfish, groupers, and moray eels, as well as invertebrates like nudibranchs, octopus, and squid. Divers also frequently encounter spotted eagle rays, shovelnose rays, wobbegong sharks and bamboo sharks. Since much of the mid-section of the wreck is collapsed, there isn’t much access to the inside, making it a great wreck dive for divers of all skill levels. With visibility around the Scottish Prince typically 6-20 meters (19-65 feet), this is an ideal year-round dive location. Remember that this shipwreck is protected under the Commonwealth Historic Shipwreck Act, so make sure to look but not touch, and take only memories and photos home with you. 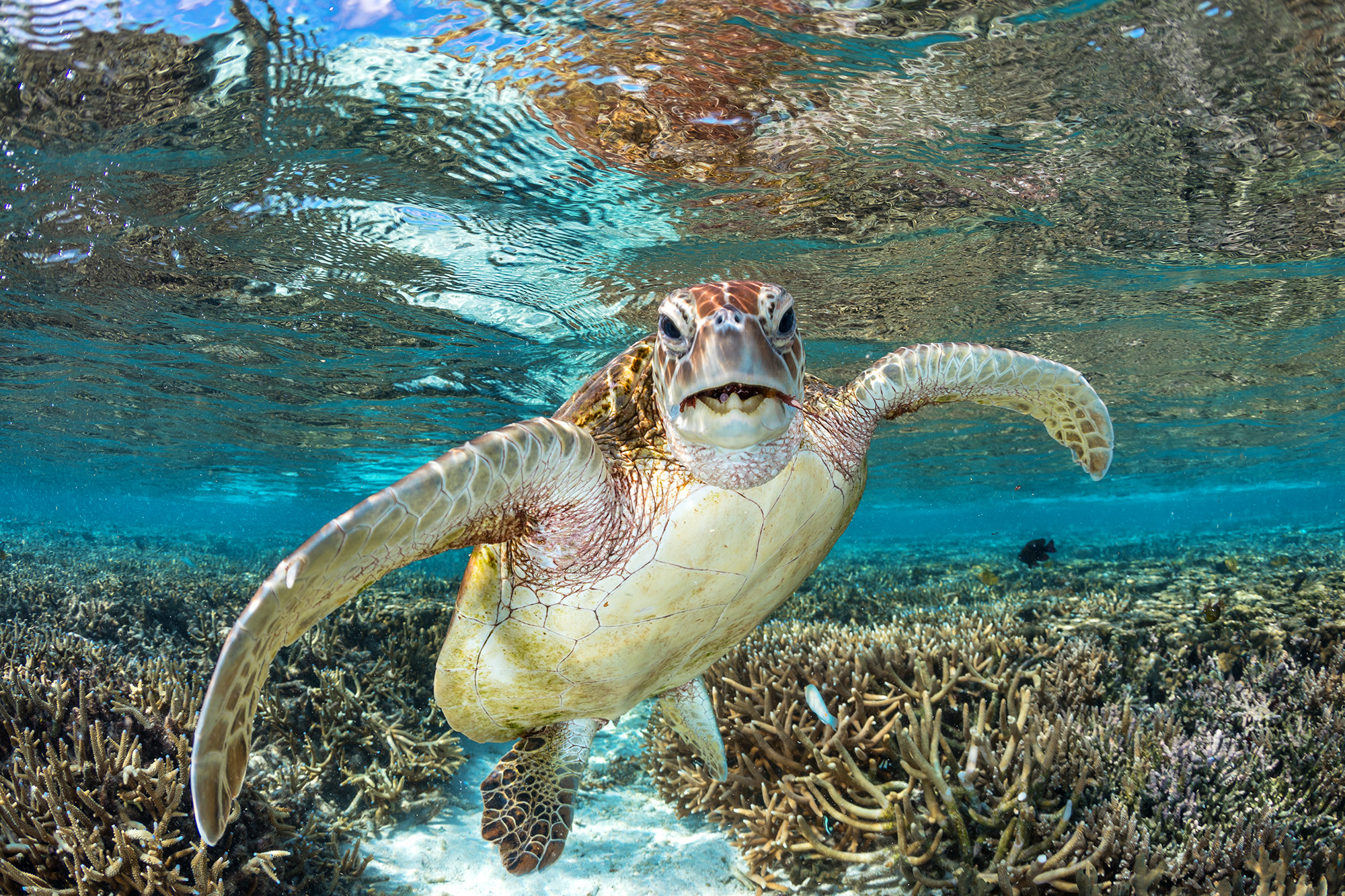 Sometimes called the jewel of the Southern Great Barrier Reef, Lady Elliot Island and nearby Lady Musgrave Island can be easily accessed by visitors from Queensland’s Bundaberg coastline. Situated within a highly protected no-take ‘Green Zone’ that was declared in 2005, the marine environment around these islands is sure to be awe-inspiring for any diver. Crystal clear waters and spectacular coral reefs are the backdrop for likely encounters with multiple species of sea turtles, manta rays, dolphins, and over 1,200 species of tropical fish. With the continental shelf and East Australian Current nearby, encounters with whales are a regular occurrence while diving around these two coral cays – especially from May thru October. A two hour boat ride from Bundaberg will get divers to Lady Musgrave Island, while a short scenic flight from Bundaberg, Hervey Bay, Brisbane, or Gold Coast will land divers on Lady Elliot Island. 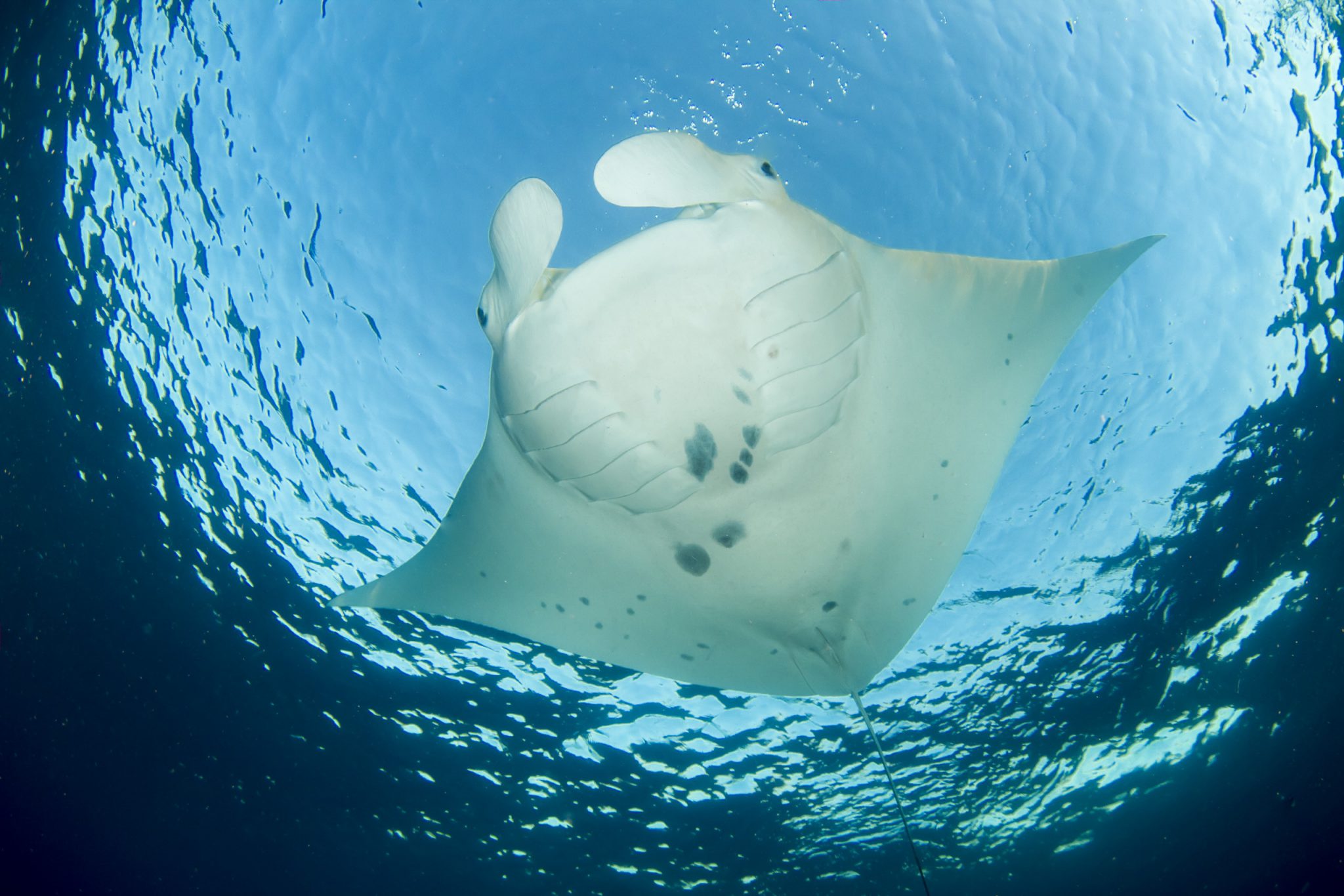 Ranked as one of the top ten dive sites in all of Australia, Manta Bommie is a rocky reef off Brisbane’s North Stradbroke Island – a favorite among locals and visitors of Southern Queensland. Known for the resident manta rays that frequent this spot during the warmer months (October through April), divers that slip beneath the surface here can find themselves gazing up at a group of mantas as they glide through the water feeding on plankton. In addition, divers here often spot leopard sharks, wobbegong sharks, sea turtles, dolphins, and a sprinkling of tropical fish species. Between July and November scuba divers are likely to spot migrating humpback whales here – so keep your eyes out for breaching and your ears tuned for singing! Suitable for divers of all skill levels, Manta Bommie is primarily 8-12 meters (26-40 feet) deep, and can be easily accessed by boat, either from mainland Brisbane or Stradbroke Island.

Located near Mooloolaba, on the Sunshine Coast of Queensland, ex-HMAS Brisbane lies in 28 meters (91 feet) of water on a sandy seafloor. This 133 meter (436 foot) retired Royal Australian Navy guided missile destroyer was decommissioned in 2005, and is now a massively magnificent artificial reef ecosystem frequented by divers. Sitting upright on its keel, the forward main deck is in about 15 meters (49 feet) of water while its stern is in about 18 meters (59 feet). Consistently good water clarity, minimal swell, varying depths, and numerous opportunities for wreck penetration makes this a great dive site to earn or utilize a PADI Wreck Diver Certification.

The ex-HMAS Brisbane is now a bustling marine ecosystem where divers can spot eagle rays, octopus, groupers, sea turtles, sharks, and massive schools of little shiny fish. Beautiful soft and hard corals are becoming more and more established over the surface of the reef as time goes on. Uniquely, a conservation park was created around the ex-HMAS Brisbane when it was sunk in order to maintain the cultural, historic, and environmental importance of the ship turned reef. 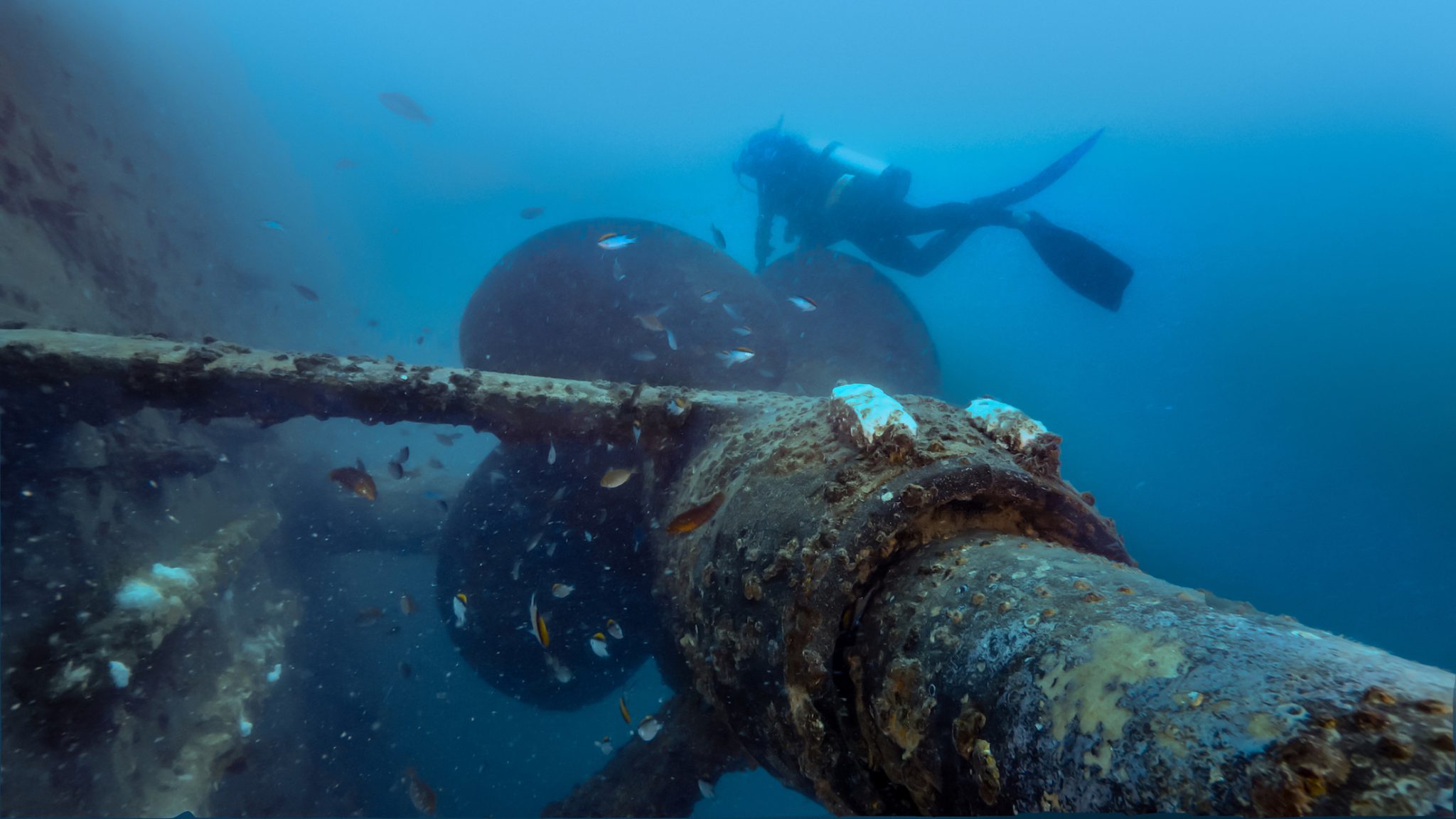 This Royal Australian Navy Landing Ship was decommissioned and scuttled in June of 2018 – making it one of Australia’s newest wreck dives. The ex-HMAS Tobruk rests on the seabed on its starboard side, with depths ranging from 10-28 meters (33-92 feet), offering ample diving options for both intermediate and advanced divers to enjoy. Halfway between Queensland’s Bundaberg and Hervey Bay, the ex-HMAS Tobruk is located approximately 31 kilometers (17 nautical miles) offshore, 41 kilometers (22 nautical miles) from Bundaberg, and 46 kilometers (25 nautical miles) from Hervey Bay. Dive tour vessels can typically bring divers to this site within an hour.

Even in such a short period of time, the underwater world has already started to reclaim this ship. Rapid colonization of the wreck by corals and mollusks has attracted colorful reef fish and anemones, octopus, sparkling schools of small silver fish, groupers, wobbegong sharks, and even passerby turtles and rays. Sheltered by Fraser Island, the visibility is typically great – making it so that divers can explore this wreck all year round. Since the ex-HMAS Tobruk is located within the boundaries of the Great Sandy Marine Park, entry to the area requires an approved permit. Dives with authorized dive operators can be booked in both Hervey Bay and Bundaberg.

Protected within the Moreton Bay Marine Park, Flinders Reef is truly a sanctuary for marine life, as well as a magical location for divers to explore beneath the surface. Less than 70 kilometers (43 miles) from the heart of Brisbane’s city center, visiting this offshore dive site makes for a great day trip. The diversity and abundance of coral species and tropical fish species at Flinders Reef is nearly unparalleled. These serve as a picturesque backdrop while divers have the opportunity to encounter marine megafauna like sea turtles at the turtle cleaning station, manta rays, wobbegong and leopard sharks, and even humpback whales as they migrate along Australia’s east coast. With mostly shallow depths, pristine visibility year-round, and something new to discover on each dive, Flinders Reef is adored by divers around the world. 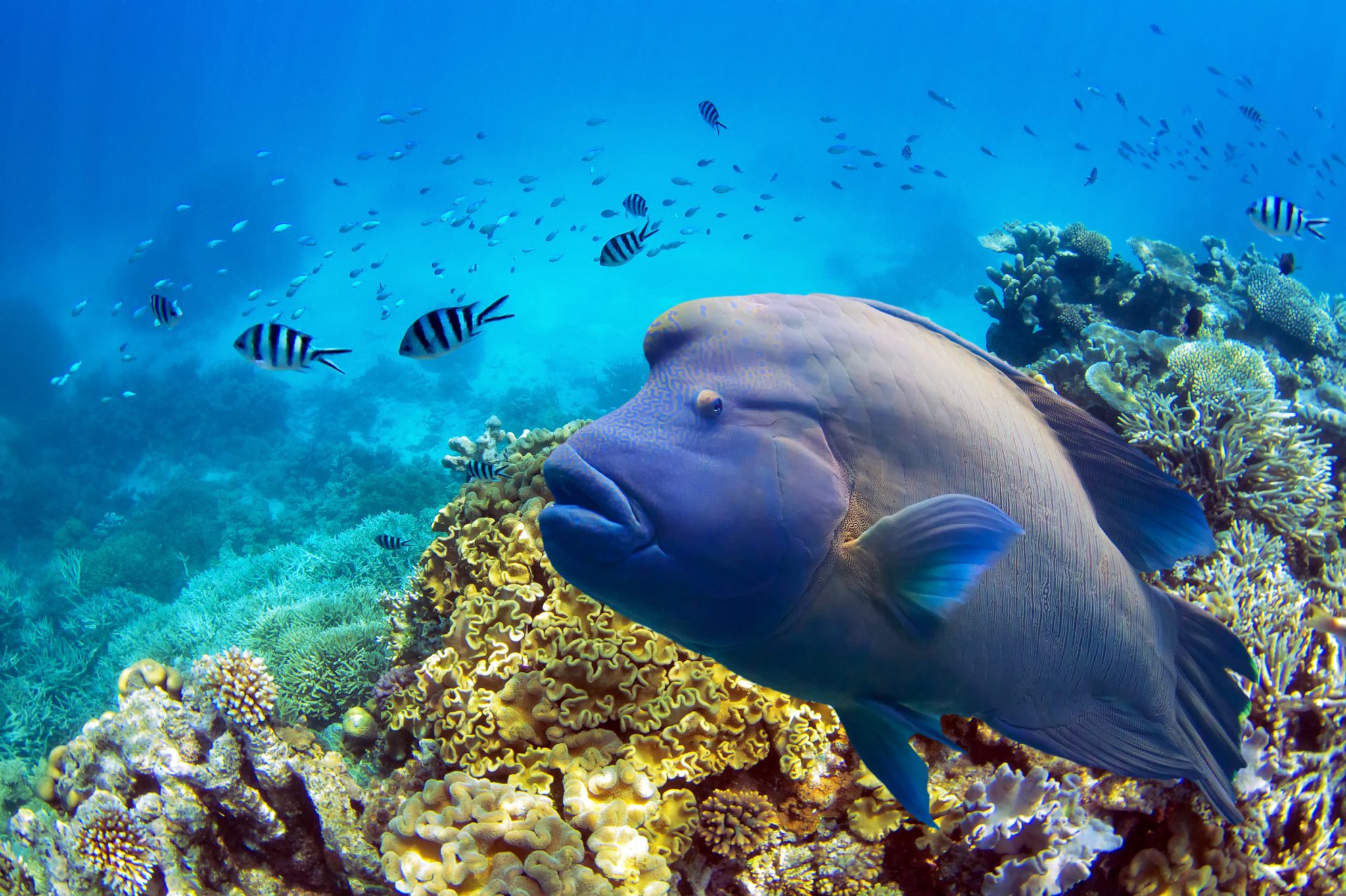 Whether you love exploring shipwrecks, being mesmerized by the colors of a coral reef, or watching manta rays glide past you (or maybe you love all of the above like we do!), Southern Queensland is home to an amazing array of world-class dive locations.

Visit the Queensland page on padi.com to start planning your dives in this unique region today!